Founded in 1977 in Sweden and active in Europe, North-America and the Far East since the early eighties, Qln has strived from the beginning to produce the most realistic-sounding loudspeakers with a special emphasis on the soundstage. Qln wants you to listen to music – not to loudspeakers. 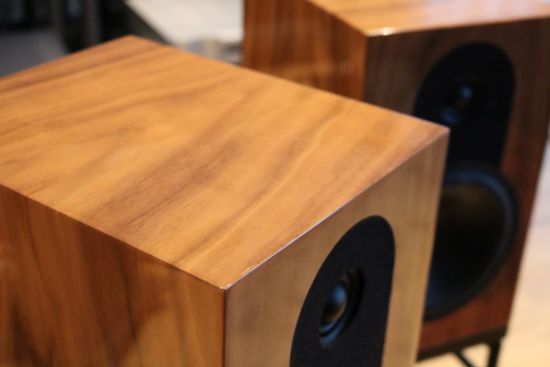 The Prestige One may be a compact monitor speaker but it still houses a 7” woofer. Made from 22mm thick HDF-board cabinet, the loudspeaker contains a bass-reflex port, but contrary to common industry practice, the Prestige One makes no attempt at tricking the listener into hearing deeper bass than is realistically possible from a small cabinet. Rather, the speaker is tuned to naturally roll-off without any ringing in the step response. Organic wool has been used to minimize cabinet resonances. 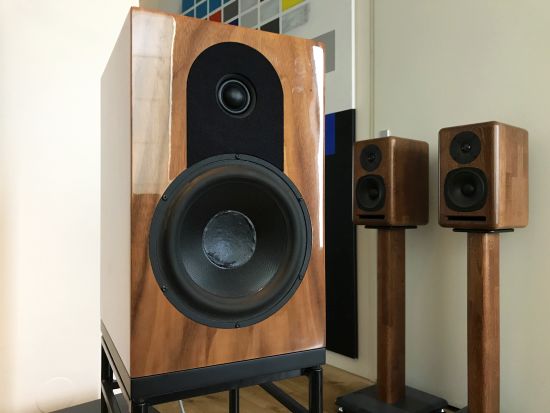 The crossover is hardwired with Mundorf capacitors and baked air coils to avoid any internal component and filter resonances. All components are carefully hand-selected and individually measured. The drivers have been specifically selected and custom developed by Danish driver manufacturer Scan-Speak and they offer the latest in driver technology. The coated Kevlar mid/bass driver with its built-in copper ring in the magnet system offers symmetric drive and higher dynamics in the midrange while concurrently suppressing intermodulation distortion which should lead to optimized handling in the vocal range and micro/macro dynamics that belie the expectations for a compact 2-way speaker design. The 25mm tweeter has a large roll surround, a built-in copper ring, and a textile dome diaphragm that provides a flat frequency response above 30 kHz with excellent off-axis dispersion. A large rear acoustic chamber enables low compression and also lowers the tweeter system resonance far below the crossover point. 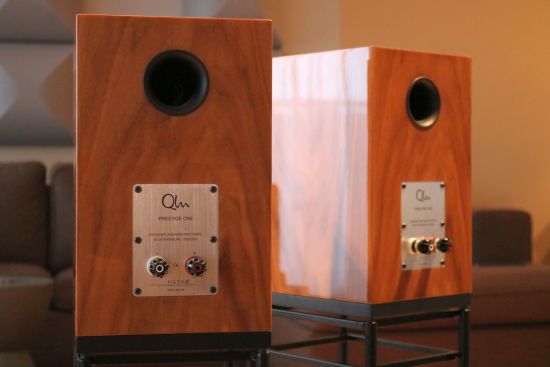 Although the speakers were pretty much run in when delivered, just to make sure, I used them for over 8 hours per day for several weeks. During the first couple of days, I noticed some mild bedding-in effects but I can’t say that I heard more changes after that. 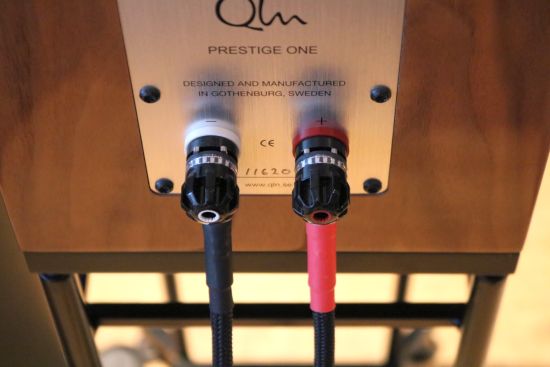 I will be reviewing the Prestige Ones primarily in a system consisting of an Ayon CD-10 II CD player and DAC, an Antipodes EX Music Server running Roon, an Ayon Spirit III integrated amplifier and Xavian Perla Esclusiva loudspeakers. The interlinks are all AudioQuest Water cinch while I will use my go-to affordable standard van den Hul Skyline Hybrid as well as the more upscale FoilFlex and Driade Flow 405 speaker cables.

Additionally, I will listen to the Prestige Ones in the other system with an Aqua LinQ streaming endpoint using Roon via HQPlayer as a source and into the Aqua Formula xHD DAC with V2 output stage, feeding the Audio-GD Master 1 preamp and the NuPrime ST10M mono power amplifier and ultimately also with the CH Precision C1 DAC and A1.5 power amplifier. The speaker cables will be the Driade Flow 405. 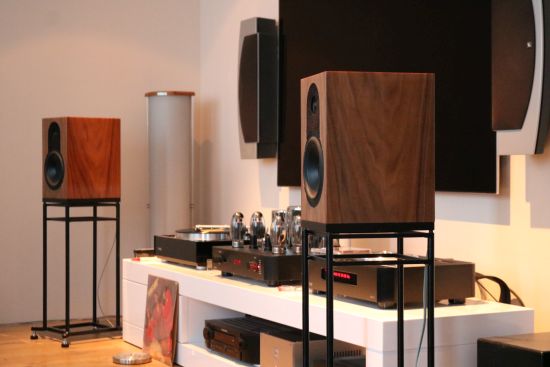 Some speakers with Kevlar cones can have a very specific tonality, they’re not quite neutral and, depending on the listener’s views, not very natural either. With the Prestige One’s, however, there is no such character that I can detect in this system. In fact, I find that the tonality is very neutral and the bass is exemplary for a speaker of its size. Not in terms of mind-blowing depth or voluptuousness but in terms of superb linearity and precision. I’m always happy when a speaker does not try to disguise its small dimensions by artificially blowing up the upper bass.

Coming from the Perla’s with their tiny woofers, though, the Prestige One’s bass goes considerably deeper and is more robust. It’s also pure, upbeat and entirely without excess weight and, even better, there is absolutely no cabinet coloration that I can detect. 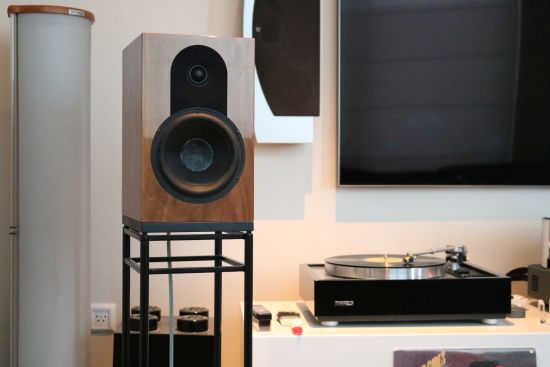 Especially vocals stand out by being well-focused and decidedly corporeal and believable. No matter what music I played, and no matter the medium, be it CDs, digital files or LPs, the vocals were always highly enthralling.

There’s one aspect, however, that took some time for me to come to grips with. It’s that there is a protruding, rather forward quality in the upper midrange / lower treble that can be piercing at times.

The Perlas are quite lively themselves and compared to very neutral speakers, they, too, sound a little forward but next to the Qln’s, they appear almost dull and restrained. With the Perlas, the perceived rise in output starts in the lower midrange and slopes off gently right before the upper treble. With the Prestige One’s, the prominence starts in the upper treble and slopes off at a higher frequency, which feels more uncomfortable to me. To be fair, there is no harshness or grain and this aspect also makes the speakers sound remarkably lively but it does distract from an otherwise very linear response.

Once accustomed to this behavior, though, the Prestige Ones positively reward with their otherwise very uniform delivery. They have infectious rhythmic capabilities and a pure, open, communicative and direct and decidedly non-filtered and non-electronic sound. Even though the midrange does not come across as being ruler-flat, the speakers manage to create an acoustic that feels highly natural. 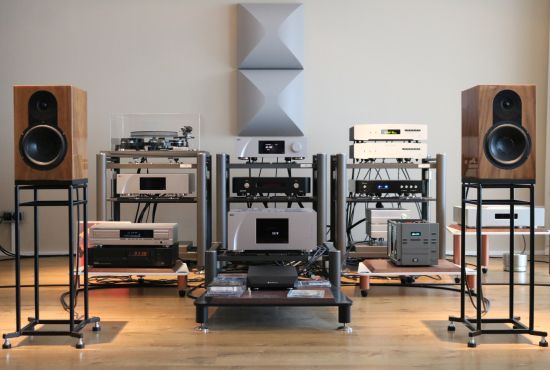 After setting up the Prestige Ones in the main listening room and after having listened to a selection of tracks via the Magico S1 mkII’s using the CH C1 DAC driving the NuPrime ST10M mono power amplifiers, again, I notice how lively and expressive the Qlns are. Just as in the other room, in this context, I also hear a forward upper midrange and lower treble and while there’s again no trace of harshness, I now do hear that the treble is not as airy or as highly resolving as that of the Magicos. But that would be unfair to expect since a single S1 MkII tweeter probably costs more than the pair of Qln speakers.

Now, I also do notice a small measure of lower midrange coloration but not of the kind that is caused by the cabinet, rather, it’s the sound signature of the woofer after all. I did not pick up on this in the other room when comparing to the Perlas and it’s really only obvious in comparison with the ultra-clean Magicos. In retrospect, to put this further into context, it is similar to what I heard with the Wilson Benesch P1.0’s and miles less evident than with any B&W speaker that I heard prior. It’s nothing to be concerned about.

Interestingly, I found that when casually listening to them while writing other reviews, I actually forgot that I was listening to the Qlns and not the usual Magicos. While wiggling my foot and humming along, it suddenly struck me that there is something inherently right about them. While they sounded different, I am reminded of the Franco Serblin Accordos, for their uncomplicated musicality.

Of course, I also won’t say that they sound similar to the S1 MkII’s but I do feel that they have a similar kind of coherence and even-handedness to them, the sense of listening to music as a whole, rather than an electronic reproduction through two very different drivers. In fact, the tweeter crosses over so seamlessly from the woofer that it could fool an unknowing listener into believing that it is a single-driver speaker.

Moving to the full CH system with Jorma Trinity speaker cable confirms that the Prestige Ones are great communicators. The emphasis is clearly more on the musical whole than on technical perfection. The resolution is not crazy-high, nor is the focus razor-sharp but for these speakers, that’s all besides the point. Where the Qln’s truly excel is not in any one area but in the coherent and energetic conveyance of the entire performance. With the Prestige Ones, it’s all about the music, not about dissecting minute details.

Oh, I almost forget to mention that in all of my listening sessions, and these amount to a lot since I lived with them for over two months, the Prestige Ones proved to have absolutely no preference for any kind of music. They fared just as well with classical and jazz as they did with electronic and R&B and with anything in-between. They are musical omnivores. 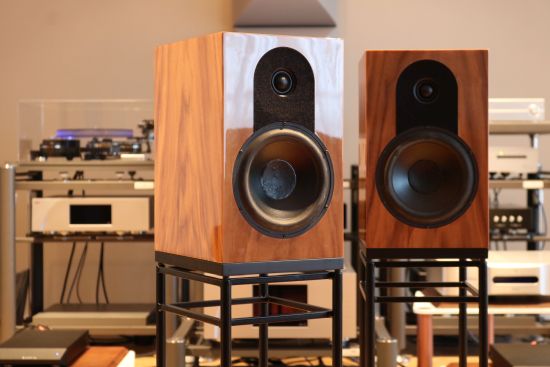 With the Prestige Ones, the emphasis is more on the musical whole than on technical perfection. Being great communicators, it’s clearly all about the music, not about dissecting minute details. Despite a spicy upper midrange, the lasting impression is that of a highly coherent and natural, decidedly non-filtered and non-electronic presentation. Without fail, these musical omnivores deliver an energetic, vibrant and involving rendition of anything that you play.

At 3.000 euro for the high-gloss finish or 2.700 euro for the matte finish, the Prestige Ones offer very good value and a refreshingly direct approach to music.