The Nitro power cable replaces the NEO and NEO-OCC models and although it looks very similar to the older NEO, the internal differences have resulted in a much-improved performance. According to the manufacturer, the Nitro makes the NEO sound slow, incoherent and colored. You don’t often see such dismissive claims for an older generation of products by the same manufacturer but it’s clear that the Mad Scientist likes to tell it how it is and that is absolutely refreshing. And, fair is fair, having also reviewed the NEO and NEO-OCC, I have to agree with the Mad Scientist.

For the Nitro Nano, the company has sourced a better-sounding 11AWG OFC copper wire with Teflon insulation. The conductors are covered with a layer of cotton for both enhanced dielectric properties and damping. Around this is a two-layer 100% coverage copper shield, that also has mechanical damping properties. Contrary to the regular Nitro (no longer available) which used regular Black Discus Sticks and Kegs, the Nitro Nano uses the new Black Discus Nano versions which, apparently, result in a more vivid portrayal with solid tuneful bass.

Nearly all cables are directional and so are the wires used to construct the Mad Scientist cables. In this case, the manufacturer has already figured out which way to orient the wire before the cables are built by actually listening to each new reel of cable to determine its best direction.

The Nitro Nano power cords come as standard with US and IEC plugs, with rhodium plating over copper contacts. Other plugs are available on request. Standard length is approximately 1.2 meters (4 feet) but you can order longer lengths. They are only available in Black, which according to the Scientist, has a better WAF. I would add that it probably also has a better HAF:-). 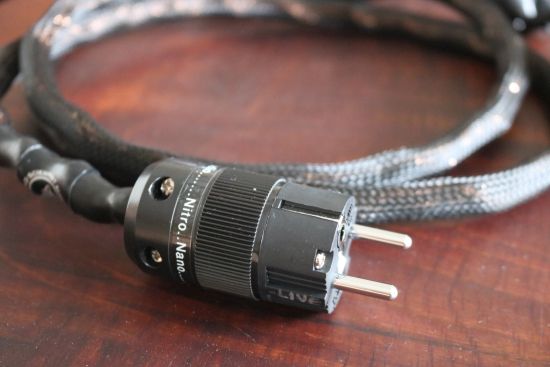 How does it work?

How does the Nitro Nano work and how is it that it can alter the sound of the connected component considering that the power has come through miles of low-grade wire? I’ll leave that for the Mad Scientist to explain, as it can be read on the website:

“Experimental data trumps any theory, especially banal ones that rely on ‘common sense’. In fact, there’s more than just ‘current down a wire’ going n here. For a start, there’s the rather strange load that a power amp typically presents. Then there are the fields – magnetic, electric – that both radiate into and out from the cord. But also you need to consider the effect that one component has on another, from the large current spikes that power amps draw, to the RF noise that digital gear makes”. 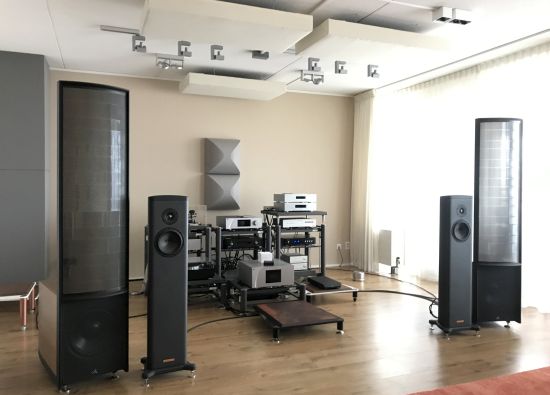 The music source for this review is the Antipodes CX, running Roon and feeding either the CH Precision C1 DAC via an ethernet cable or the Aqua Formula xHD with V2 output board. When using the C1, I also use the CH Precision A1.5 power amplifier, usually with the Martin Logan ESL15A loudspeakers and Jorma Trinity speaker cables but occasionally also with the Magico S1 mkII speakers and Driade Flow 405 speaker cables. The latter speakers are usually used with the highly affordable but absolutely not to be underestimated Audio GD Master 1 preamp and the power amp that I have available at the time. The best ones yet were the Audio GD Master 2H monos but since these have gone back to the distributor I used the NuPrime ST-10. 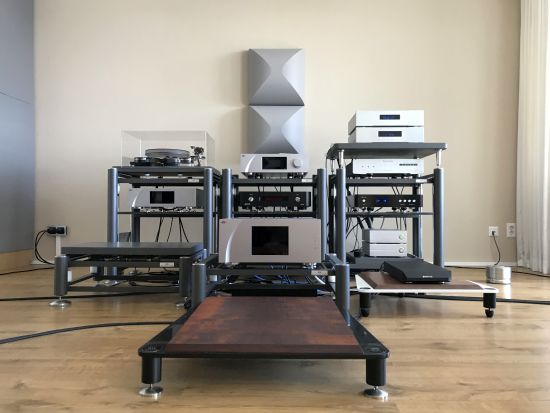 Listening with the CH Precision C1

Starting with the CH Precision C1 DAC as the first candidate to receive the Nitro Nano treatment, I can say right off the bat that the cable has a very large influence on the sound. To all the people who maintain that if an audio component reacts to a power cable then it must not have a good power supply, I will say: have a look inside the C1 DAC. If ever I saw a superbly built power supply this is it. And yet, the DAC responds strongly to power cables.

With the C1, the Nitro Nano cable yields a lusher and harmonically richer delivery with a soundstage that seems to more envelop you more. The result is a sound that works especially well for modern R&B and electronic music. It’s an effect that is not unlike what the Transparent Reference XL interlinks used to bring to the table. This kind of smoothness is what I absolutely craved when I still used Magnepan MG3.6’s and it is what makes even mediocre recordings sound alluring. However, as with the Transparent cables, this seductive richness comes at the expense of an amount of tightness and articulation. Unlike the Transparent cables, the Nitro Nano does not sound dark and it also does not sound slow. Rhythmically, it’s just right.

The Belden 19364 with Bals Schuko and Oyaide C-004 IEC that I normally use with the C1 is comparatively more articulate in the bass and more open and expressive in the upper midrange and with this DAC sounds more accurate to me. There’s no denying that it also sounds cooler and more business-like but the Belden gives me more of a feeling of being coupled directly to the music whereas the Nitro Nano acts as a sort of filter to shape the music into something nicer. Of course, being coupled directly does create a narrower path where the music sounds right. The C1 can certainly take it and for me, as a reviewer and a seasoned listener, however, that is how I like it. What I described so far can be observed with both the Logans and Magicos but the Nitro Nano does work more synergistically with the latter.

So far, I’d say that the Nitro Nano has a very pleasant delivery that will likely work wonders with leaner-sounding components. But when combined with the inherently full-sounding and already highly refined and well-balanced C1, its virtues combine into a sound that with most recordings is a little too rich.

But it doesn’t end here. There are two more components that I aim to give the Mad Scientist treatment. 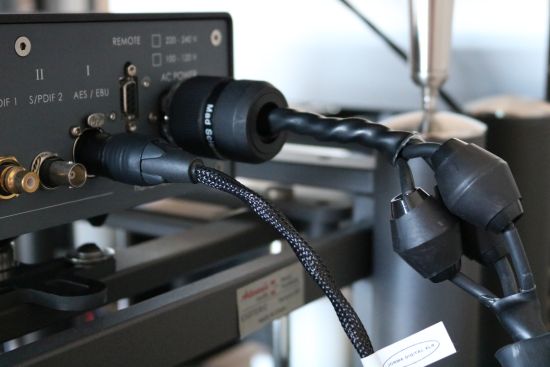 Listening with the Aqua Formula xHD

Changing scenes from the CH Precision and Martin Logan system to the Aqua, Audio GD, NuPrime and Magico system, the next test-subject to receive the Nitro Nano treatment is the Aqua Formula xHD DAC. This is a very transparent, highly refined and slightly lean-sounding converter and actually my favorite after the C1. One would expect the Nitro Nano to work well here and that is indeed the case.

The Nitro Nano struts all of its aforementioned magic to create a fuller, creamier and less slender presentation with a more forgiving quality which makes it less exciting but very easy to listen to. While the Nitro Nano definitely works better with the Aqua than with the CH, there is still a feeling of having lost some expression and intent compared to the Belden cable. It’s a beautifully alluring sound but it’s just a little sweeter and friendlier than I like. 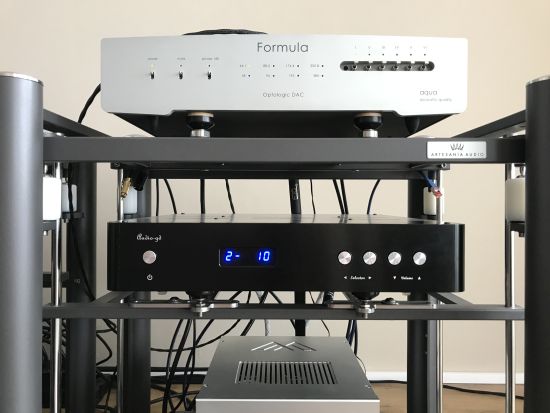 Listening with the Audio GD Master 1

The Mad Scientist himself had commented that his cables work very well with the Audio GD components and as my test showed he is absolutely right. While the cable’s enriching powers are every bit as evident here as they were with the C1, the combination with the Master 1 now works unreservedly synergistically.

With the Master 1, the cable provides a larger and deeper, more naturally breathing soundstage with more movement within it, along with a riper and richer tonality and the unmistakable sense of everything becoming more organic and more emotionally involving. And, importantly, unlike with the C1, I do not feel that the Master 1 sounds any less expressive or impactful with the Nitro Nano cable than it does with the Belden. 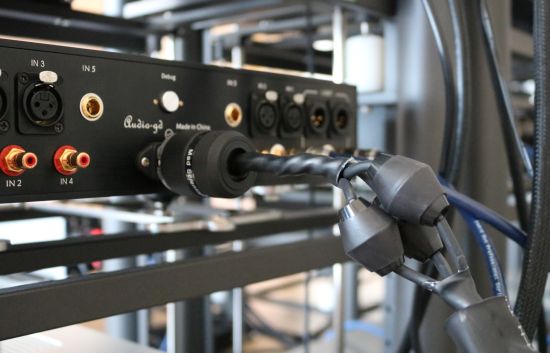 The Belden is slightly cleaner and slightly tighter but compared to the Nitro Nano, now it also sounds a little boring. And, importantly, the Belden is not any more energetic or any more revealing. Because it is less euphonic, the Belden is strictly speaking probably technically more accurate, but musically and emotionally as well as technically, I have a clear preference for the Mad Scientist cable. It just makes the music so much more engaging.

Similar to Harmonix footers as opposed to Stillpoints, the Mad Scientist Nitro Nano power cable enriches the sound by accentuating the harmonics rather than the transients. Put another way, this cable beautifies the sound and slightly sweetens it rather than sharpening and tightening it. However, I should note that the harmonious camp also contains specimens that go as far as to turn performances into ill-defined, undynamic and overly thickened, easy-palatable renditions of the real thing. The Nitro Nano, thankfully, steers clear of such performance. For instance, this cable sounds considerably faster and expressive than a Furutech Alpha 3, a cable that I considered to be neutral in the past but now find to sound a little too thick and rounded. Given that the Alpha 3 has now been succeeded by the FP-TCS31 which is an even sweeter sounding cable, this puts matters into perspective.

I think the measure of success when using the Nitro Nano power cable is co-dependent on the level of nuance and refinement of a given component. The CH C1 and the Aqua Formula xHD DACs both are ultra-refined and very subtle and they are not in need of any enrichment or other beautification. These components require partnering equipment and cables that allow them to relay all of their output unaltered. The Belden power cable sure is nothing special but it is very neutral and that makes it work well with many components. The Nitro Nano’s richer and warmer delivery seems to work best with components that have an inherently lively and energetic sound. Perhaps the cable’s best application is with components or systems that are slightly on the rough or hard side where its alluring grace, richness and refinement will likely work wonders.

The Nitro Nano injects every audio component with a harmonically richer tonality with full bass, a smooth and lush midrange, a sweet yet open and detailed treble and a free-flowing and organic quality. The cable’s smooth character does mean that care should be taken when deciding which audio component to use it with. If the component is already highly refined and somewhat relaxed then this can result in an overly friendly sound with diminished expression. When the match is right, however, such as is the case with the Audio GD Master 1 preamplifier, the Mad Scientist Nitro Nano works wonders. Then, it provides a larger and deeper, more naturally breathing soundstage with more movement within it, along with a riper and richer tonality and the unmistakable sense of everything becoming more organic and more emotionally involving, all while retaining all of the expression and dynamic impact of the performance.

Thanks, Christiaan for the detailed review. I have to admit we are in the “harmonic” camp nowadays. When I was younger I used to like hearing details I had not heard before – this leads to extreme comments like “Can you hear a motorbike going past the concert hall at 6:33? Left to right, sounds like a Harley”.

But nowadays I value harmonic correctness over detail. I find this is more like live music where details, although present, don’t tickle your ears the way a “detailed” system does. But live music is harmonically correct.

Often with digital systems (especially “real world” rather than “reference”), there’s plenty of detail, but the harmonics are lacking, and this is the sort of system that Nitro Nano works well with. Also, you are spot on with the Audio-GD gear – that is one of the main amps used in development. 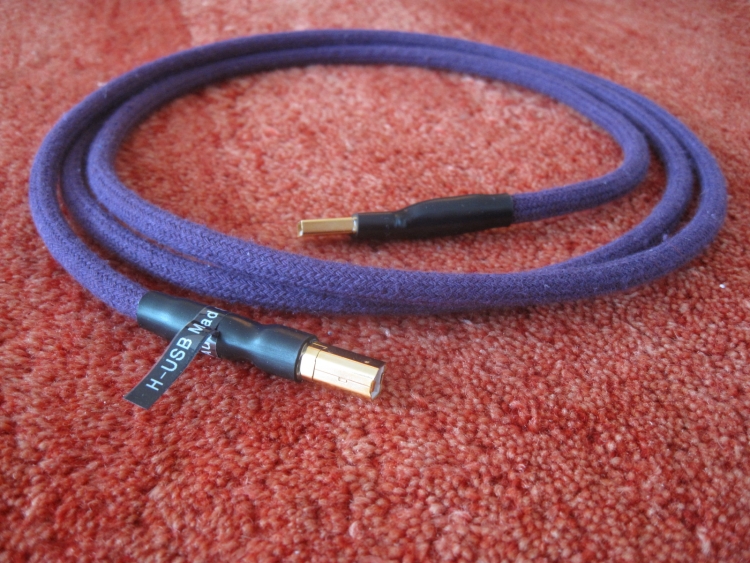