The Master 1 is a transistor preamp and it does not try to disguise this fact by sounding bloomy or otherwise rose-tinted, nor would I want it to. While it does not sound tubey (which is what good tube amps also should not sound like, btw), when fully run-in, it also does not sound transistor-y at all. Even seasoned tube-heads and transistor-haters were amazed by this preamp’s fantastically natural sound. The unit simply gets out of the way and for me, that is the best a preamp can do. 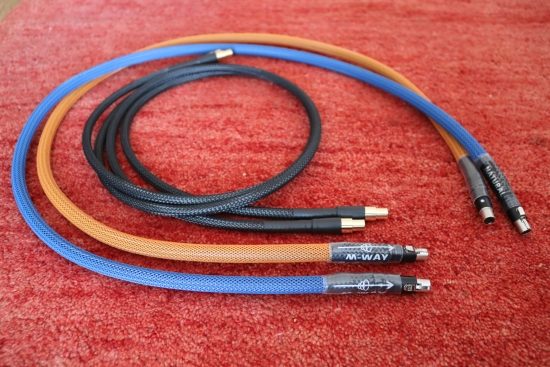 The above ACSS cables as used in the previous Audio GD review are of the smaller variant, to be used between sources and preamps. 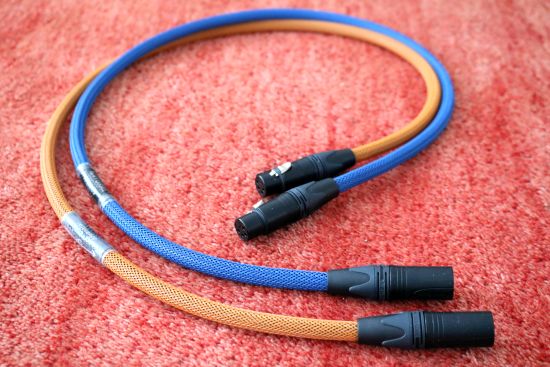 These ACSS cables are of the bigger variant, to be used between the preamp and power amp(s).

As with all Audio GD products, the Master 1 and Master 2H can be connected either the conventional way or via the proprietary ACSS format. In short: this technology enables signal transfer via current, rather than via voltage, which is helpful for two reasons. First, it enables very simple circuits and simple is nearly always better. Second, the current conveyance is unaffected by the non-linearities that are inherently present in transistors.

Supplied with the amplifiers are the older model cables, the same ones as I have used in the earlier Audio GD review. Apart from modest cosmetic changes, the newer cables have a slightly lower noise floor which will be of most benefit with high-efficiency speakers. Since neither my Magicos nor Martin Logans are very efficient, this is of little consequence for me.

Knowing from the previous review just how much the ACSS format improves the musical flow I started my listening (after the preamp had been run in) using the M-Way Natural Reference ACSS interlinks. While this combination clearly showcased the components’ superb quality in pretty much all the important fields, I felt that I obtained the best sound as well as the most neutral balance using the 1.848-euro Vermouth Reference XLR interlinks. Although they are priced out of proportion given the amplifiers’ price, aside from providing a very linear response, these cables also injected precisely the right dose of “woodiness” to yield what I feel is a fully convincing and natural tonality. The M-Way cables that I was loaned along with the amplifiers are only one of the various models that the company offers. So, this is not to say that ACSS is not the way to go with these amps or that M-Way cables are not the ideal match but rather that it might be worth experimenting with different models and brands. For me, the Vermouths were such an excellent match that, with the exception of the comparison with the CH Precision A1.5 power amp using the CH Precision Balanced Link XLR cables, I left them connected throughout the review. The Master 2H power amps do not offer cinch connectors. 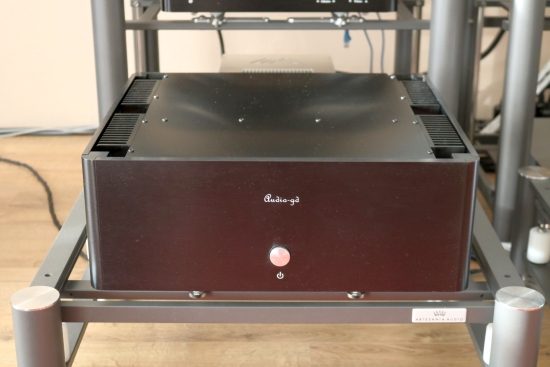 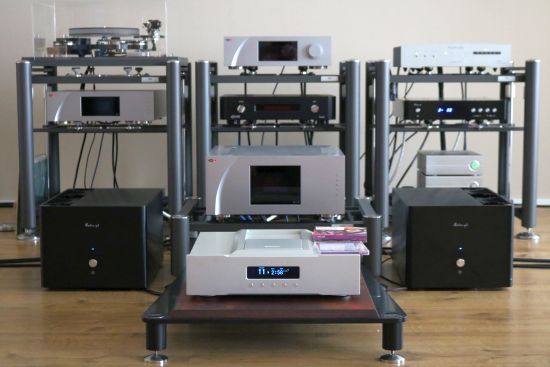 Although the Master 3 stereo amp was a fine performer in the previous review, offering good value for money I found the Master 1 preamp and the R8 DAC to be the stars of the show.

Only after the wheels were already set in motion for the Master 2H review in combination with the Master 1 preamp did I think of also asking for the Master 3 amp. Alas, at that time it was not available for comparison. This leaves me to wonder whether or not the 2H’s are basically a model 3 amp divided over 2 chassis or if there have been refinements, in addition to the extra transistors, of course. The Master 3 employs 12 per channel for a total of 24 while the Master 2H’s use 40 per channel for a total of 80.

I guess now we will never know for sure but if you trust my listening impressions using different speakers (Wilsons and Kromas then, Logans and Magicos now) then all the evidence points to the Monos performing in a different league. And, yes, I can say that with full a lot of confidence as I am comparing them again with the CH Precision A1.5. 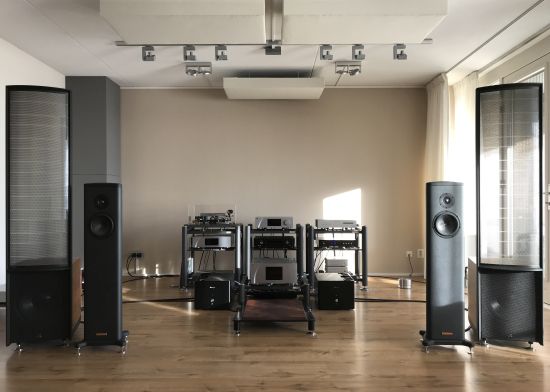 Ok, ok, enough with the foreplay. Let’s dive in, shall we? Unlike the Master 1 preamp, the Master 2H mono power amps were well-run in. This particular pair has been in use for 5 years and besides this sparing me the uncertainty during running in, it also nicely illustrates that these products not only provide great sound at a very friendly price, they also stand the test of time. 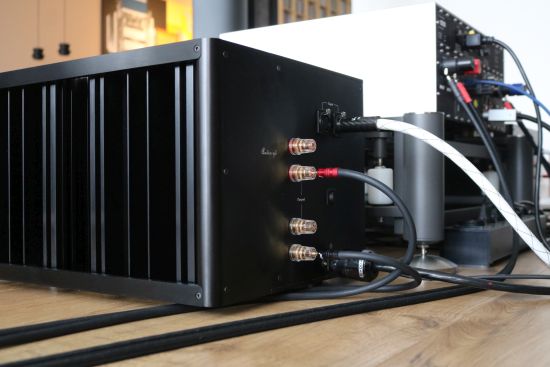 Since the Master 1 preamp already has my vote of confidence and seal of approval, I’ll focus on the complete system with the Master 2H monos. With music provided by the Aqua LinQ streaming endpoint and Formula xHD DAC (with V2 output board) (thus not involving the CH Precision components at this stage) and driving the Magico S1 MkII’s via Driade Flow 405 speaker cables, the Master 1 and Master 2H mono amps sounded flabbergastingly good. Seriously, I am not talking good for the money, nope, their performance is seriously good full stop.

At this point, the amplifiers were still positioned smack on the floor with no coupling other than the standard aluminum feet. These feet, simple as they may seem, may very well be the ideal couplers. while not spikes, they do end in a narrow 1-cm circular contact point. For a truly fair comparison I should have  set them up on Artesania Aire platforms like the CH A1.5 but as I have only one spare Aire, the Modular Rack (turned into floor platforms) are not large enough and since the amplifiers sounded so great on the floor I was content to leave them where they were. 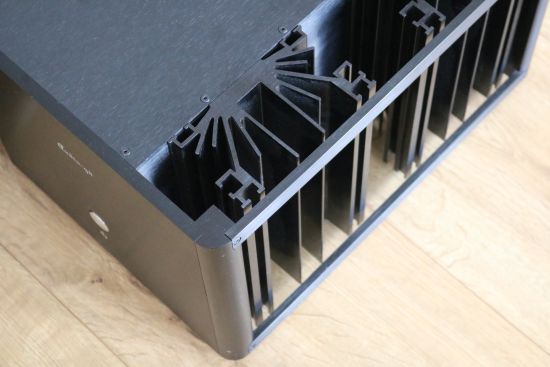 The system delivery is very energetic and dynamic, very neutral and very linear but not in the sense that there was ever too much control or a lack of musicality or flow. In fact, the Audio GD system manages to thread the fine path between fluidity and refinement on the one side and lifelike dynamics and impact on the other side. The sound is neither warm nor cool, not tubey or transitory, there is no rounding or thickening, no thinning or whitening, these components are spectacularly neutral and clearly extremely low in distortion. The presentation is highly natural, with accurate and instant transient attack as well as naturally fluid decays and that is something that is very hard to achieve. I’ve heard plenty of systems sound very refined but lacking drive and liveliness and vice versa, even in the stratospheric price range.

Interestingly, I never heard the slightest indication of smear, as it can happen with amplifiers that employ a large number of transistors in parallel.

Soundstaging-wise, there wasn’t much between the CH system and the Audio GD system, both sounding similarly wide and deep, which makes a strong case not only for the Audio GD pairing but also for the Italian components. If anything, I found the Audio GD + Aqua system even slightly more articulate and direct and perhaps slightly more layered in the depth plane. 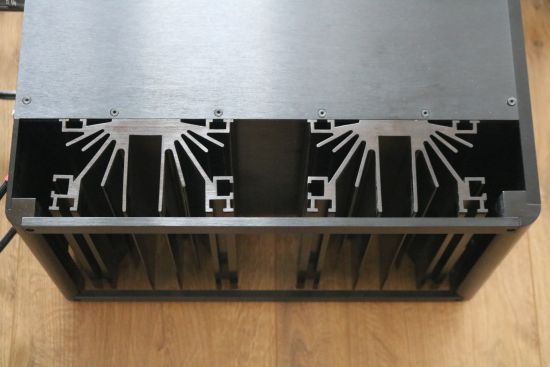 It’s not quite a tie between these systems, though. The Swiss stack’s breathtaking pricetags should be good for something other than tank-like build and a slick interface, right? And indeed, the CH components do a couple of things better and other things differently. 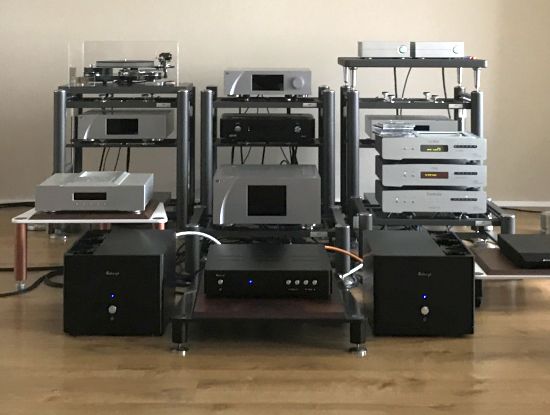 After having also listened using the Martin Logan ESL15A’s, having switched between the two systems and speakers repeatedly and having separated out comparisons between the Audio GD power amps in the context of the CH system, I think I have a good handle on just how the GD power amps differ from the CH power amp. It was already clear from the system performance that the Master 2H mono power amps are neither shrinking violets nor bombastic disco bashers. Just how great they are is very clear in a direct comparison with the almost 7 times as expensive CH Precision A1.5 stereo power amplifier. Using the same CH Precision Balanced Link XLR interlinks, on the surface, the Master 2H’s sound very similar in many ways. For instance, both amps are exceedingly neutral, the Master 2H’s bass is every bit as tight and well-controlled as the A1.5’s, the pacing is just as foot-tappingly fast, the midrange is just as pure and expressive, the overall dynamics are every bit as good and, rather surprisingly, the treble is almost as airy, fluid and refined. This was surprising because the Master 2H’s employ no less than 40 transistors per side! Normally, such amplifiers display a rather coarse treble in addition to having incredible muscle but not the Audio GD, this amp truly sounds like it uses only a modest amount of transistors.

If there were so many similarities, where then do the two brands diverge? Well, when you get down to it, after a couple of minutes, you start to notice the differences. The Master 2H’s omit the uber-refinement that graces amps such as those by Jeff Rowland and indeed CH Precision. And this sense of micro-resolution is not even mostly apparent in the upper treble or upper midrange but rather in the actual midrange. Here is where you can hear that the CH Precision manages even better the trick of not sounding like a transistor amp and injecting the music with the kind of organic fluidity and fullness of texture that is normally more associated with tubes. Quite understandably, the Audio GD amps are transistor amps and while they have absolutely no typical transistor flaws, ultimately, the CH Precision amp gets away from that fact just a little better. This in turn helps the lyrical aspect in performances which makes the A1.5 sound more emotionally engaging and the Master 2H soberer or matter of fact. But, honestly, that’s mostly it! Technically, the A1.5 can’t really improve on the Audio GD’s, not in terms of neutrality and transparency, not in terms of transient spontaneousness, not in terms of dynamics and impact and certainly not in terms of ultimate power, as we will see in the last part of this review which I will perform at audio buddy Niels’ place using Magico Q5 speakers.