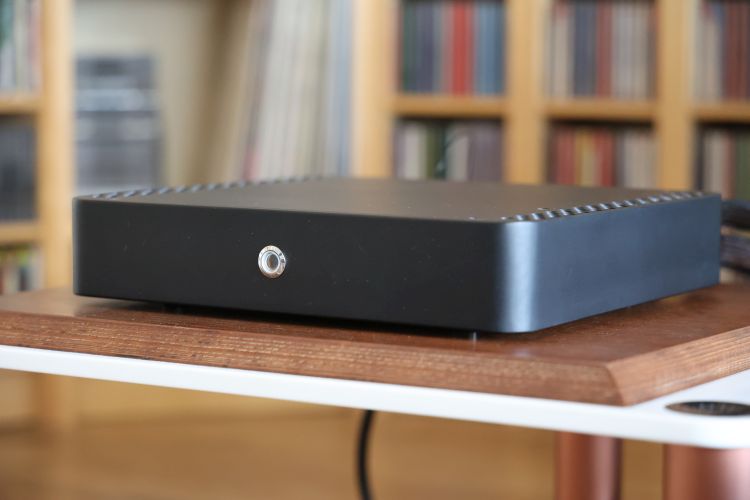 The atm audio Migjorn phono preamp has been designed to enjoy at a reference level. Its single purpose is to deliver the music as conceived by its artists and producers. This is what can be read on the atm audio website and I can totally get behind that aspiration!

My first personal encounter with atm audio was when reviewing the gorgeous EPM-50 Class-A mono power amplifiers. Finished from a solid block of aluminum, these beauties amazed me with their smoothness and liquidity. When the next atm audio amplifiers that I reviewed once again turned in a remarkably smooth and rich sound in spite of being Class-D designs, I knew it wasn’t a coincidence. Designer Jesús Alejos Pérez knows what he wants and is clearly capable of making all of his designs perform accordingly. 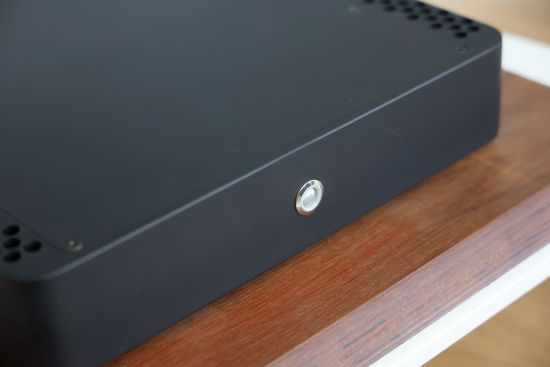 My review was delivered with a prototype enclosure for which some cosmetic details still need to be finished, such as a silkscreened logo and illuminated power button on the front, a different ground connector, high-end RCA connectors, and some other small finalizations. But, importantly, the electronics are the final version. Below is what the retail unit will look like.

In atm audio’s book, as well as in general, the critical elements of a phono stage are accurate RIAA equalization, low noise, low distortion, and a good overload range. The RIAA correction as used by atm audio is based on very low tolerance components. The resistors are metallic film and have 0.1% tolerance. Also employed are Russian PIO (paper in oil) capacitors, which are famous for their consistency and accuracy. 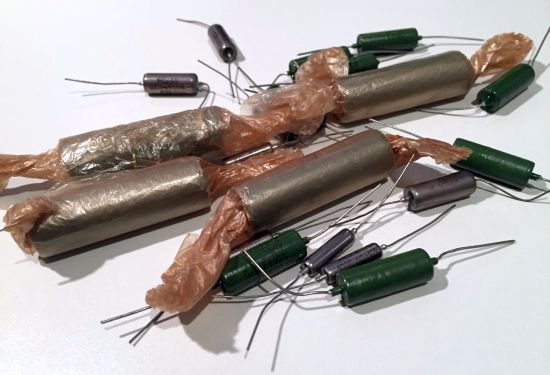 The preamplifier section is fitted with a pair of J-FET transistors that have been manually matched within a margin of 1%. The entire system accuracy is ±0.25 dB, 20 Hz – 20 kHz, and extending to 45 kHz. 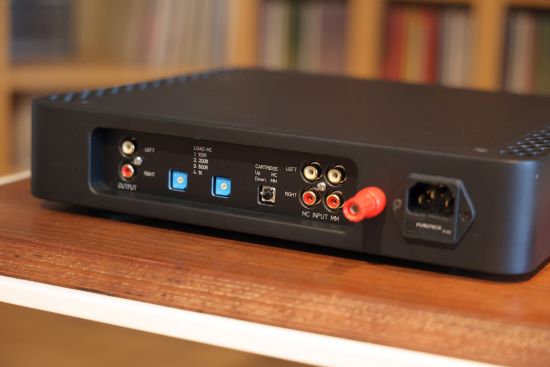 Above is my pre-retail version rear panel. The final version will have high-end connectors and other refinements

The Migjorn phono stage offers separate inputs for MM and MC cartridges and allows the user to select between them via a toggle switch on the back. Also on the back are two rotary switches to select the input loading for MC. The MM input loading is fixed at 47K.

The main circuit board is configured as double monophonic with a double ground plane to avoid interference. The power supply is composed of a low dispersion toroidal transformer, high-speed rectifier diodes, a very low noise Sparkoslab voltage regulator, and Nichicon MUSE filter capacitors. 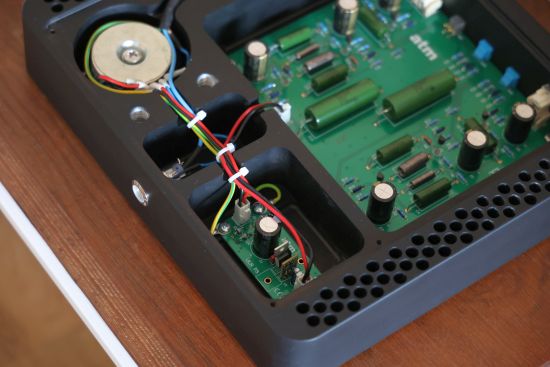 All discrete components, not only on the main PCB but even for the voltage regulator 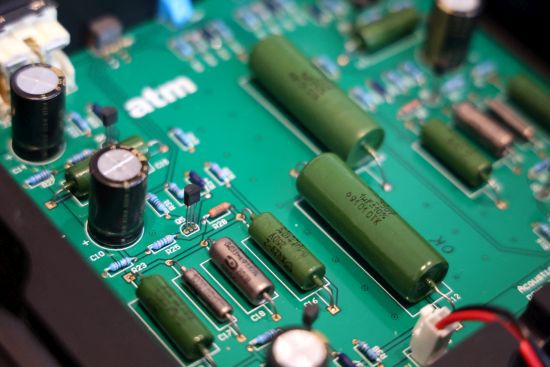 The signal-to-noise ratio of MM (greater than 82 dB) and MC (greater than 72 dB) is virtually inaudible. The distortion is extremely low, typically less than 0.01% in the entire audio band. The total gain is 70 dB. In use, I can confirm that the preamp is indeed very quiet, I heard no hum and no hiss at all.

Jesús warned me that “As time passes, the preamp improves its sound. The more hours, the better. This is because the PIO capacitors need a long run-in time”. With this in mind, I made sure to leave the unit switched on for over 2 weeks prior to listening to it. 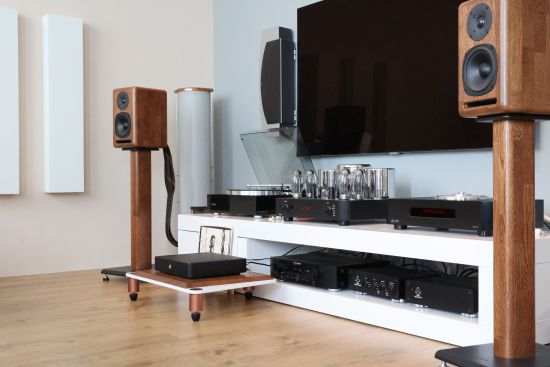 For my first acquaintance with the Migjorn, I’m starting in my secondary setup, which for the analog part consists of the Ayon Spirit III integrated amplifier, AVID Pulsare II phono stage, Thorens TD1601 turntable with ZYX Bloom3 MC Cartridge, and Xavian Perla Esclusiva speakers. The Migjorn is powered with a Belden 19365 cable with Bals Schuko and Oyaide C-004 IEC Connector.

The Bloom3 MC cartridge is specified to be loaded with 100 Ohms minimum but with the AVID phono stage, I prefer to use it with 300 Ohms. The closest values that the Migjorn offers are either 200 or 500 which made me decide to start with the higher setting.

For this review, I have connected the very linear and transparent FoilFlex speaker cables and interlinks. My normal interlinks between the turntable and phono stage are, don’t laugh, the well-known red and white freebie interlinks that often come with mid-class HiFi components. As I found when using classic Thorens turntables like the TD160 and TD125 which came as standard with similar interlinks fixed to the chassis, these simple cables just provide the ideal synergistic balance with this system while introducing very few downsides. Of course, better cables surely exist but I haven’t come across them yet. Every time that I found a cable that does some things better, it introduces downsides in another area.

With respect to the cable between the phono stage and amplifier, I normally use the same basic cables but this connection is different than the one between cartridge and preamp and certainly allows room for improvement. Here’s where I will also try two other interlinks.

Starting with the simplest interlink setup, I am nevertheless impressed with the Migjorn’s fantastically liquid presentation. For instance, Lonnie Liston Smith’s Dreams of Tomorrow not only sounds appropriately dreamy but his piano and keyboard parts also come across as emotionally involving as well as highly realistic. The realism comes from a very convincing timbre and fulness, combined with excellent dynamic behavior. 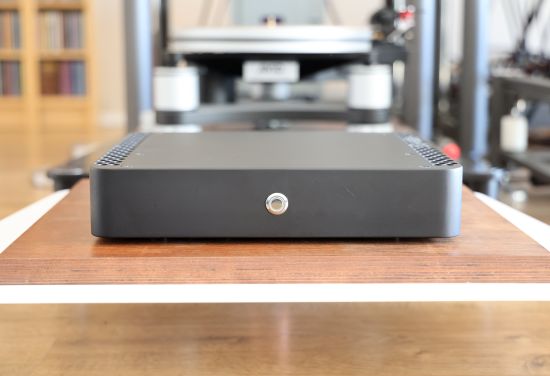 The Migjorn also excels in throwing a very wide en deep soundstage with immense ease and a lush, free-flowing delivery, along with excellent focus. When a preamp sounds this lush or relaxed, often, it also sounds a little slow or a little restrained dynamically. Not this time! The Migjorn may be smooth and relaxed, but it is not withheld or static. Meanwhile, the resolution is absolutely top-notch and easily better than the AVID. The latter is indeed not the world’s most refined phono stage but it does have a more incisive and upbeat presentation which makes it very nimble and rhythmic. On the other hand, this property arguably also makes it less organic and free and even a little dry or transistor-like in comparison.

As the Migjorn sounded so fabulously smooth and relaxed I felt safe in raising the resistance value one more step to 1KOhm to allow the stylus as much freedom as it can get. This works very well and I’d say that unless the speakers or setup have a tendency to treble hardness or edge, one should not be afraid to try the 1KOhm setting with any MC cartridge.

Even after having been switched on for over 3 weeks, and quite contrary to its sonic presentation, the Migjorn remained cool to the touch. Clearly, the preamp’s external temperature is not an analogy for its sound! 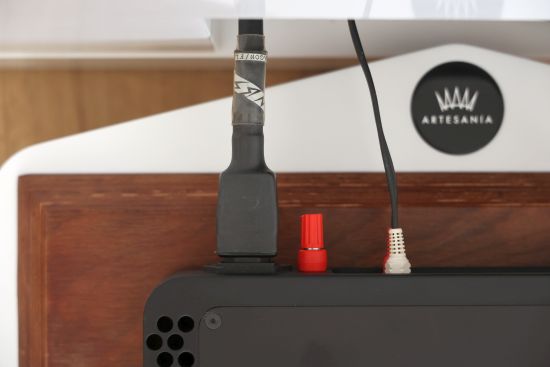 Even though the Migjorn worked fabulously well with the Belden power cable, I wondered what it would do with the slightly leaner and tighter NBS Dragon/Fly. As I sort of expected, this works beautifully with no trace of dryness or leanness but instead a slightly more open and communicative midrange. Thus, this cable was retained for the remainder of the test in this system. 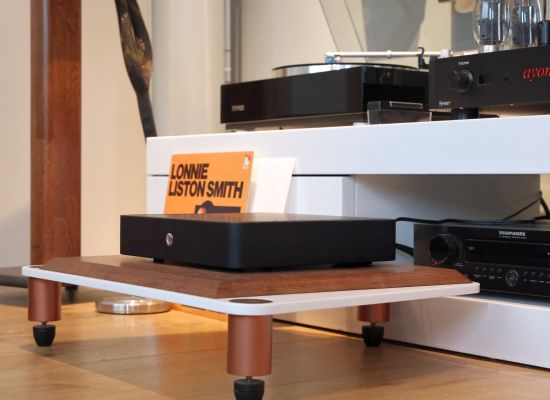 Changing the standard interlink to the Driade Flow Link Reference 808 provides further enhanced smoothness and fluidity but at the expense of some speed and attack. While the standard cable is not as refined as the Driade, I do prefer its balance in this particular setup. There was one more cable that I could try: the FoilFlex! This is a super-precise, linear, and transparent cable but also one that is incredibly revealing and not forgiving and that’s why I don’t use it very often. Having connected it to the Migjorn, I was fully expecting this to prove too much and for the sound to become overly controlled or too technical but that did not happen. Instead, the bass became tauter and more articulate but without becoming lean while the overall sound retained its fulness of timbre. I’ll admit that the other two cables sounded more romantic but with the FoilFlex, the musical message was definitely communicated the clearest. And the same was true for the rhythm, judging by my happily tapping foot.

To throw in another great example, Sade’s classic Promise album has always sounded lean and tonally a little pale. There’s a timeless quality to this music and of course Sade Adu’s vocals remain beautiful and thus the music still works for me. But with the Migjorn, this Sade album truly never sounded this good! Even a simple song like Jezebel comes across with intense emotion. Now, the LP sounds full, solid, upbeat, and yet with remarkable smoothness and liquidity. And the sound just flows super-freely, it’s absolutely pouring out of the speakers, very much maximizing the typical strong aspects of Tubes and Vinyl. 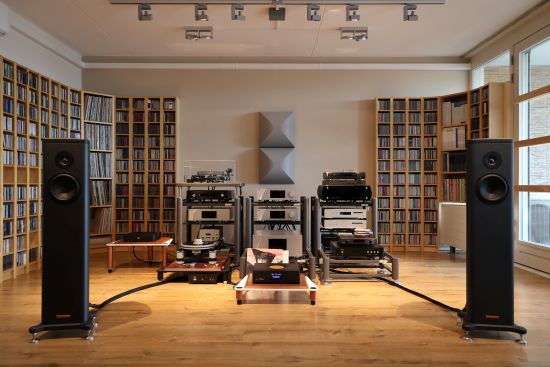 For the next part of this review, I will listen to the Migjorn in my main audio setup with the AVID Sequel turntable with Audio Origami PU7 arm and Dynavector 10×5 High-Output MC Cartridge, the CH Precision L1 preamp and A1.5 poweramp, and Magico S1 MkII speakers. 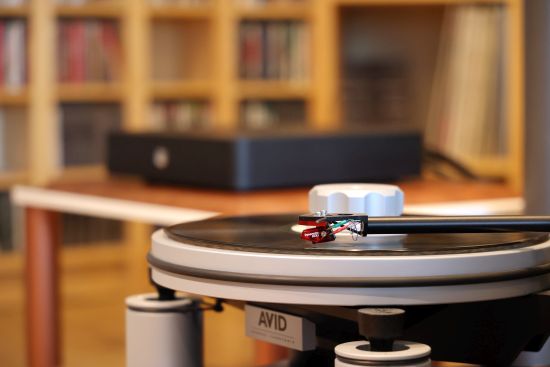 Since the Dynavector is a High-Output MC, it can be used with MM inputs which is great so that the Migjorn can be fully tested. The phono stage was powered with a Belden 19364 cable as is my default routine for all components in this system but I did connect the FoilFlex interlink right away as this worked so well in the other setup. 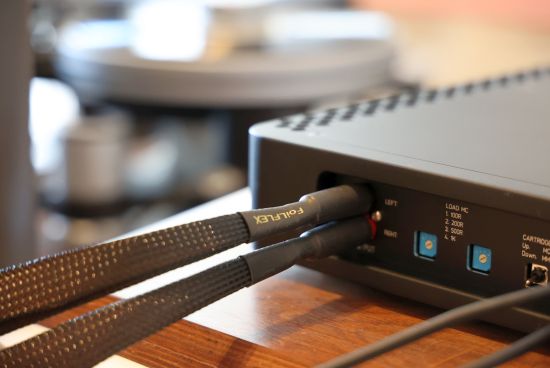 The first record that I played sounded beautifully smooth, richly saturated, and satisfyingly full-bodied, much more so than this turntable and cartridge normally do, but unlike in the other setup, the speed and dynamics were not quite as infectious. Rather, the sound was a bit dull. I wondered, would this be down to system synergy? It couldn’t be the source as I have never before managed to make the AVID sound lackluster, but neither do the speakers or the rest of the system… I was puzzled and called it a day. It was late at night anyway.

The next day, just for good measure, I spun up the turntable again and took a second listen. Well, I’ll be… now it sounded great again! Still smooth and relaxed but now with the right pacing and much better dynamics.

And then, I remembered what Jesús mentioned at the beginning regarding the capacitors needing a lot of running in. So, I guess that the power dip when moving the preamp from one system to the other must have been responsible for this. Apparently, even after 3+ weeks, the Migjorn can still use some more running in. In any event, I recommend always leaving it switched on. There’s no use for this either as the unit always stays entirely cool to the touch and thus presumably consumes very little energy.

In this system, too, the Migjorn managed to present the music with very high resolution and excellent refinement on the one hand and a smooth and rich tonality on the other. 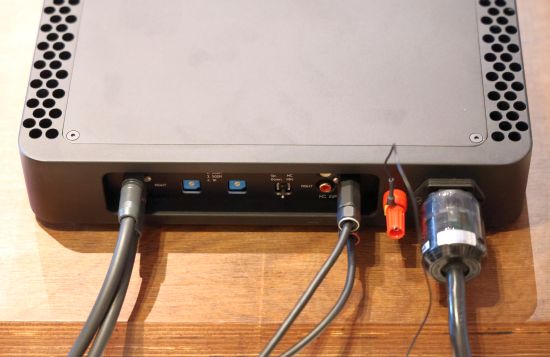 Now that the Migjorn was back on steam I tried the Driade interlink and indeed, now it worked just as well as it had done in the other setup. And actually, in this system, I think I prefer it to the FoilFlex. With the latter, the sound sure is the tightest and most articulate and with the best conviction and attack, but with the inherently very clean-sounding AVID, even if it did not become technical, it did make the sound a little matter-of-fact. With the Driade interlink, the Migjorn is allowed to fully play its trump card which is to extract all of the record’s information and retain the pacing and dynamics and present this in a tonally rich, buttery-smooth, and utterly liquid manner. 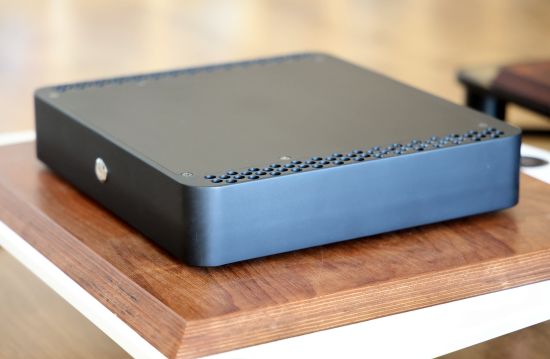 Never before have I encountered a phono stage that sounds so smooth, rich, and effortlessly liquid and free-flowing yet so detailed, dynamic, and engaging. The Migjorn is not about tightness, control, or explicitness. It is an ideal phono preamp for those who seek a seductive and rich quality in their music but without paying the usual price in terms of resolution, pacing, or excitement. 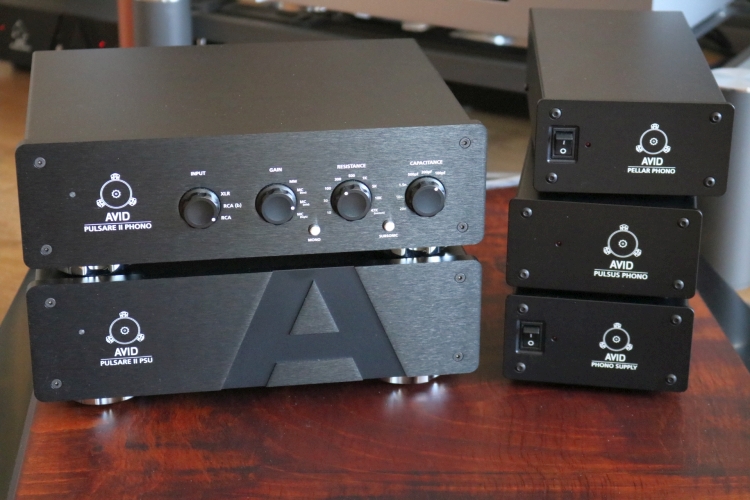