All CH Precision products are built in a modular manner and because they work with slide-in expansion boards and have firmware that can be user-upgraded simply by inserting a USB thumb drive in the rear slot, upgrading them truly is easy as pie. A great example of why this is such a great feature is the upcoming Roon-Ready Ethernet board that will replace the current UPnP Ethernet board. While UPnP sounds fabulous, there is just no substitute for the superb Roon interface, for which I wrote the first extensive review in 2014. Needless to say, I am eagerly anticipating the release of the new Roon board! 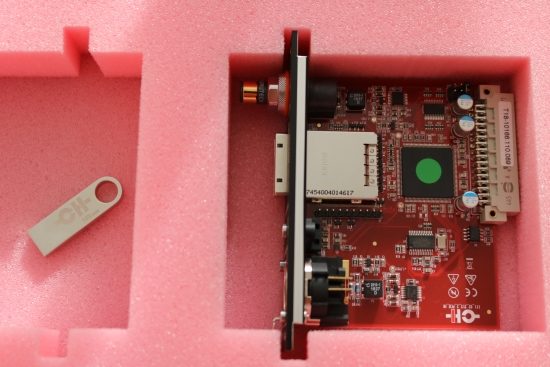 The board comes in a sturdily foamed carton box with CH-branded USB thumb drive and clear instruction. As we say in the Netherlands: A child can do the laundry.

Reviewed here, is the new DIGITAL IN board that does not only offer new functionality for its own connections but also for all other inputs, meaning USB and Ethernet as well. 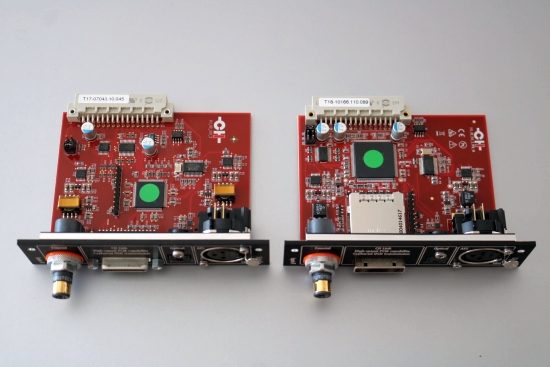 Left: DIG IN board, Right: the new DIG IN HD board

New DIG IN board for the C1 DAC/Controller

My C1 DAC was purchased with the then standard DIGITAL IN board and that is how I reviewed it and consequently fell in love with it. A little while ago, CH’s ever-friendly Raphael Pasche asked me if I was interested in upgrading my C1 with the new DIGITAL IN HD board. Even though I have nothing but the utmost respect for CH Precision I have to admit I was a little hesitant at first. After all, the C1 sounded fantastic just the way that it was and a change in its behavior might necessarily not be an improvement for me or my situation. However, my curiosity won and I agreed to do the upgrade. Raphael added that it is important to make sure to do all the required listening prior to doing the upgrade because there is no easy way back. The reason for this is that in order to make the new board work, the C1’s main firmware also needs to be updated and after that, the unit is no longer compatible with the old DIGITAL IN board unless it is downgraded using a routine that is not available to the public. I took this advice to heart and carefully prepared a playlist to use for my comparisons. The upgrade itself is self-explanatory and while upgrading, the C1’s display continually shows which parts are upgraded. The whole process is done in less than 30 minutes. 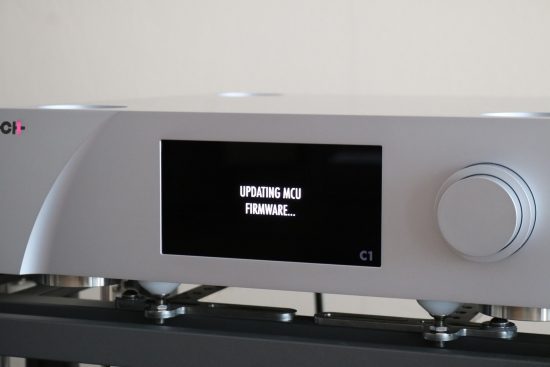 The DIGITAL IN board is a stereo digital input board, offering four digital inputs – AES/EBU, S/PDIF, Toslink, and CH Link HD, the latter on a newly shaped connector. The CH Link HD interface allows for the synchronized transfer of all HD audio content including DSD and is the optimal link between the D1 and the C1 D/A controller. The characteristic impedance of this new link is now better controlled and more stable across frequencies and the electrical specifications of the driving stage for the CH Link (rise time, current limiting, output impedance) have been fine-tuned to reduce HF noise and obtain better results.

Another big change is the entirely new implementation for the upsampling of PCM signals. The old board offered three filter options of which Minimum Phase was the one I liked best. All three settings worked on the same principle to synchronously upsample the incoming signal (by a 2, 4, 8 or 16 ratio) and zero padding the original signal and the differences in sound stem from the type of low-pass filter that is used. The new implementation uses spline interpolation and works very differently. Instead of zero padding the original signal and low-pass filtering it, meaning that new sample values are added but the original samples are also modified, the intermediate values are now calculated as curves that pass precisely through the original points and even match the slope of the originals where they connect. With this change, everyone at CH agreed that the flow and naturalness of the minimum phase were retained and now combined with the speed and resolution of the linear phase filter.

I was curious to learn more about the upsampling implementation as well as precisely what sets the new board apart from the old one so I asked mechanical and software design engineer Loris Stehle for more info. He was more than happy to explain and his entire response can be read in part 2 of this review. But technical background aside, the purpose of the new board is, of course, to extract the data even more precisely and in doing so to produce even better sound. So, what exactly are the audible differences between the non-HD and HD board? 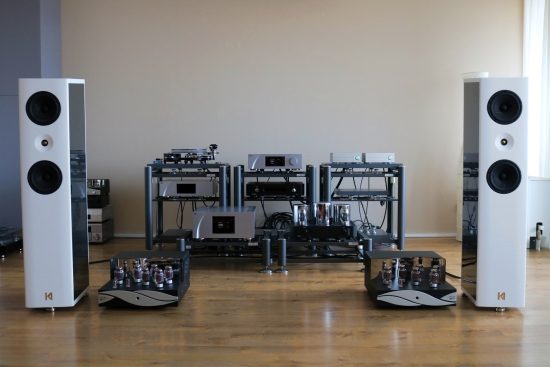 For this comparison, the C1 was primarily used in my default setup with the CH Precision A1.5 amplifier. The Zesto tube amps next to the speakers are part of another review.

After having given the old board a final careful listen (using minimum phase filter) and having swapped it for the new board (using spline filtering), the sound is indisputably different. All the refinement and subtlety of the old card is retained and even if the C1 with its old board was already very speedy and articulate, the new board has further upped the game in these areas. Bass guitar riffs are now clearly more distinctive in pitch and definition and the overall pacing seems to be a little faster as well. I’d never have called the C1 woolly but with the new board, it most certainly is even less so. Crisper and clearer, one would be forgiven to assume the sound has also become drier but that is most certainly not the case. The C1 is still fluid and smooth and entirely free of edginess and overall now cleaner and even more neutral. This does mean that it has become a little less sonorous in the midbass.

Having owned many Wadia DACs and CD players (that use spline filters as part of their Digimaster process) an assumption might be that the new DIG IN HD board’s influence on the sound might be similar to the classic Wadia sound. However, that is not the case at all, rather, it is the reverse. And that is actually a good thing because those old Wadias such as the 861 CD player and the 27 DAC were absolutely not free from character. They were dark and dry and very sonorous but depending on the system, they could provide precisely what was required in a given situation. As I wrote in the original review, the C1 with the original non-HD board did have a remarkably sonorous and fullsome timbre that reminded me of the classic Wadia sound while also offering resolution and refinement as well as treble air that the old Wadias were not capable of.

The C1 with the new DIG IN HD board verges away from that particular sound in favor of being more transparent. It has become more neutral and even more precise which, with a brand name like CH Precision, makes perfect sense. But don’t assume that this move toward more neutrality somehow makes the C1 sound bland or devoid of character because that is absolutely not the case. With the new board, the DAC has an even bolder and more energetic delivery and, if anything, is now even more engaging than it was before. It is hugely expressive and still has an extremely lyrical way with melodies. Even if the new board has made the C1 sound more neutral it is still more solid and full-bodied than most other DACs that I have used. What it most certainly is not, is lean in any way. Most importantly, it can still sound rich, smooth, and relaxed, just as it is in the recording.

Apart from the increases in neutrality, precision, and focus, something also changed in terms of front to back soundstaging. The imaging that was initially behind, between and a little in front of the speakers has now moved to between and in front of the speakers. in other words, whereas the C1 with the old board had a mid-hall perspective, the C1 with the new board moves the listener closer to the performance. Another way of putting this is to say that the sound has become a little bit more forward but without any shoutyness that one might fear to come along with this.

When asked for his input on why the new HD board’s soundstaging may have changed, Loris offered the following theory: “As the sound propagation through the air attenuates fine details, a very detailed sound reaching our ear could be interpreted by our brain as being generated closer to us”.

“We are known to use several cues to estimate sound source distance. The most obvious one is sound level (a sound will be louder when we are closer to its source), a second one is the ratio of direct sound energy to reflected sound energy (mostly used in closed space, where reflected sound level is almost constant and direct sound is highly correlated to our distance to the sound source). But there are most likely other cues that our ears and brain use to estimate distance. I think it is plausible that a slightly “blurred” sound is interpreted by our brain as coming from a greater distance than a more detailed sound, especially if this blurring has characteristics identical to that of a given distance of air that a sound wave has to go through. And as the sound propagation through the air attenuates fine details, a very detailed sound reaching our ear could be interpreted by our brain as being generated closer to us.”

If it was possible, I would have preferred to retain the deeper soundstaging perspective but the overwhelming improvements in the other fields make the decision to upgrade an absolute no-brainer. The new board has made the C1’s presentation even more energetic and involving as well as more transparent and more faithful to the source.

A little tweak that might be worth repeating is the option to use USB Class 1 or Class 2. Besides enabling sample rates over 96kHz which may or may not be important to you, Class 2 also sounds distinctly different from class 1. In short, Class 1 sounds more earthy, more solid and sonorous, and Class 2 sounds more ethereal, airier and more spacious and free-flowing. The extra spaciousness that is obtained with USB Class 2 is a nice benefit but it does go at the expense of some bass solidity and grip. And so, Class 1 remains my favorite but, as they say, YMMV. After the board swap, depending on personal taste and system synergy, one setting or the other might be preferable. I’d suggest to just give it a try and decide for yourself. But no matter how you view it, I highly recommend doing the board upgrade.

More technical info pertaining to the precise differences between the DIG IN and DIG IN HD boards as well as an in-depth explanation of the techniques used can be found in part 2 of this review.

Kudos to the team at CH for managing to further improve the C1’s already stellar performance. With the new DIGITAL IN HD board, the C1’s presentation is even more agile and exciting than before as well as more transparent and ultimately even more faithful to the source.

This concludes my assessment of the board’s sonic properties. For more technical information, continue reading on the next page of this review where Loris Stehle of CH Precision will provide interesting insights.