It is said that this DAC needs plenty of running in. This may be so, but even so, new from the box, never having been used, the still cold BDA-3 plays already plays very convincingly. It is a solid, sonorous, full-bodied and dynamic sound that engages immediately. I do hear that it does not achieve the level of transparency, resolution, focus, and imaging outside of the speakers that the Aqua does, but the funny thing is that 10 seconds after noticing this, my foot starts tapping and I forget about the technicalities and simply enjoy the music. There’s just this very positive feeling that emanates throughout the music and without even a trace of brightness or harshness.

I find that this is very much a typical Bryston quality: no matter if it’s an amplifier, CD player, Streamer or DAC, they’re all enthusiastic music machines. 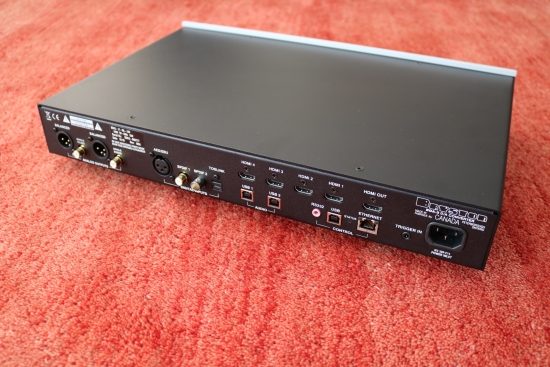 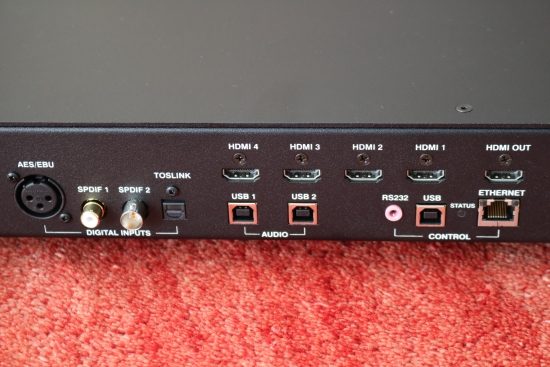 While letting the DAC simmer for a bit as it runs in, let’s focus on the incredible amount of connections that it has on offer. For starters, finally here is a DAC that has not one but two USB inputs, jay! Just why manufacturers keep insisting on fitting only one USB port while allowing for multiple SPDIF inputs really is beyond me. Having two USB ports is not only handy for a reviewer such as me but in a time when just about any music source has a USB connection, having only a single USB input on a DAC is quite a limitation. The BDA-3 also offers AES/EBU, Toslink and coax SPDIF on cinch as well as BNC and even has four 1.4a compliant HDMI inputs as well as an HDMI output, capable of 4K at 30fps. This is another surprise and a very welcome one at that! Imagine the possibilities: extending the functionality of an older TV or AV receiver or simply routing video sourced audio in the best possible way into the audio system. The BDA-3 can decode PCM up to 384kHz/32 bit and up to DSD-256, through asynchronous USB inputs, and accepts both PCM and SACD input via HDMI. As it does not decode surround formats, the BDA-3 will use EDID for handshaking between devices to only retrieve 2 channel material from a disc. Although it does not process surround sound, the BDA-3 can actually pass through the incoming signals to another receiver such as a surround processor or a display, provided that a non-HDMI input is selected. The BDA-3 also decodes DSD/SACD, but because I don’t actively use this format, I have only checked this functionality superficially. Using what DSD files I have at hand, the BDA-3 highlights the format’s higher resolution while retaining the same strengths as it does playing PCM files. 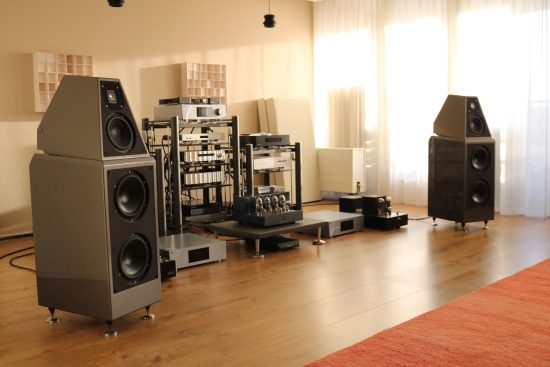 After running continuously for a week using bRadio content on the Bryston BDP-3 Streamer via USB, I resumed listening to the BDA-3.

The system used is my regular review system, along with other components that happen to be over for review. As such, I was able to use the BDA-3 with the Aqua Formula xHD DAC, the Bryston BDP-3 Media Player, and the CH Precision C1 DAC/Controller. The preamp was the Jeff Rowland Corus + PSU and power amps were two CH Precision A1’s. Speakers used are the Wilson Watt/Puppy 8. 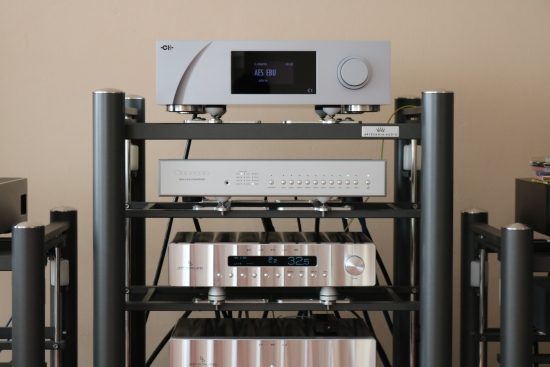 Just as when listening to it cold from its box, the BDA-3 still has an immediately engaging sound to listen to, with a propulsive presentation, bold dynamics, big bass, and a very natural tonality. While cold from the box I found it to be less focused than the Aqua Formula xHD DAC, it seems to have completely made up for this after having played for a week, with focus as good as I have heard it from any other DAC. I previously noted a less than wide soundstage and although it still does not sound as wide (as in imaging outside of the speakers) as the Aqua, it did gain a more atmospheric quality, a sense of enveloping spaciousness which together with its rhythmic sure-footedness is an important factor in retaining the listener’s attention. Add to this its neutral yet colorful delivery, totally convincing timbre and the total absence of any hardness or grain and the BDA-3 becomes quite the proposition.

The BDA-3 so far has only one area in which it does not excel. Its low-level resolution, or call it refinement or nuance is good, but not stellar. It’s not evident with all music but listening to well-known tracks I find that its resolution and transparency do not reach the levels that the Aqua achieves, nor is the Bryston’s treble as delicate and refined. But in turn, the Aqua is also not as impactful and sonorous and forceful as the Bryston. This is something that I hear more often: most dynamic and powerful sounding components tend to gloss over a smidgeon of fine detail. Vice versa, very many highly detailed components simply do not have the drive and engagement factor that the Bryston so clearly has. 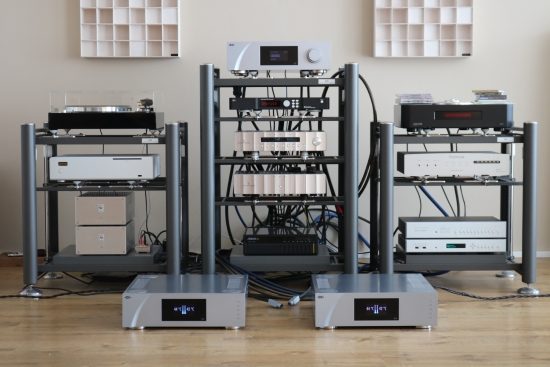 Switching to coax and bringing in the incredible and incredibly-priced (cough-30k-cough) CH Precision C1 DAC, the situation becomes even more interesting. As my review sample of the C1 does not have a USB card, I switched to using coax from the Bryston BDP-3 streamer prior to once again comparing the three DACs. 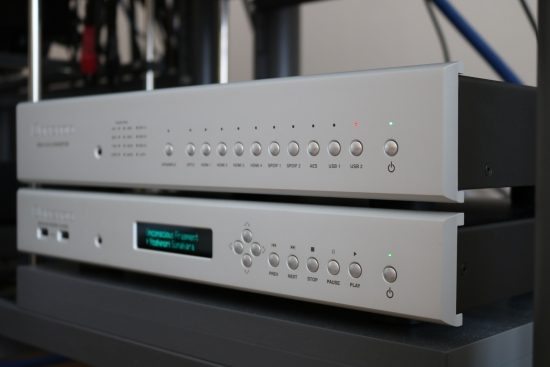 Above: the BDP-3 and BDA-3 are equally wide and deep and stack up very nicely.

Starting with the Aqua I should note that the sound was now quite a bit fuller than when using USB with this DAC, but still not quite as propulsive as the BDA-3. Switching to the Bryston BDA-3 DAC, still using coax, the sound was again familiar with its boldness and highly communicative powers. Now using coax I did notice that low-level resolution had stepped back a notch or two, but it was still a very engaging sound. To double check, I connected the two Brystons via USB as well as coax and switched between them from the BCD-3’s web interface. Sure enough, the BCD-3 sounded quite a bit better via USB, gaining transparency, focus and refinement all at once. And once again I had to admit to really liking this DAC. The Aqua trails ahead in some fields, the Bryston in others, but I definitely like them both! At this point, I could not wait any longer and had to find out just how the BDA-3 performed relative to the CH Precision C1. This DAC/Controller demands a very hefty investment but rewards with the very best sound that I have heard from a DAC so far. Dangerous territory, of course, but let’s just live on the edge this time. 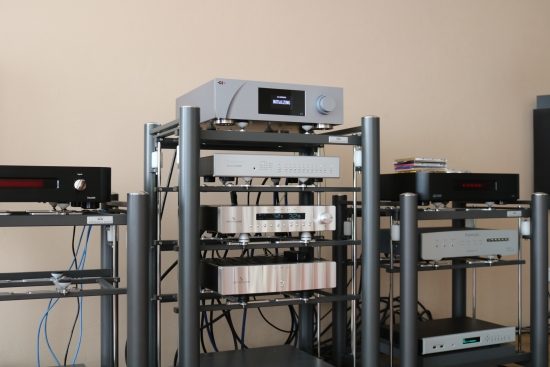 Switching to the C1, via coax (remember: no USB board), it took no time at all to hear that it outperforms both the Bryston and the Aqua, no matter their connection method. And so it should, I guess, at its very elevated price tag. But, let’s get really objective, shall we? The C1 successfully combines the strong aspects of the Bryston and the Aqua into a seamless whole and for me, this is what makes it superior. Rarely does any audio component tick all the audiophile boxes, but apparently every now and then it is possible to have it all – at a hefty cost. 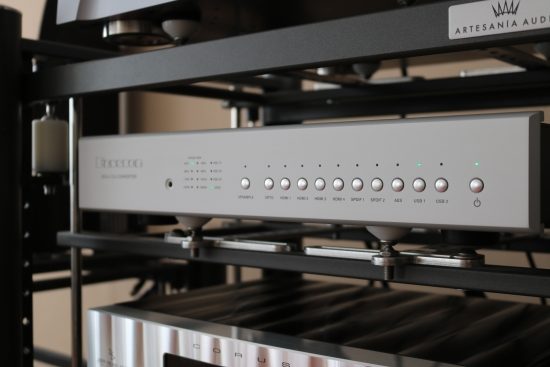 But then again, the C1 does not sound more propulsive, more dynamic or more lively than the Bryston, and it does not have more focus, better transparency or more low-level detail than the Aqua. It seems, therefore, that the Aqua and the Bryston DACs are already performing on the edge of what is possible in their respective strong areas. And this, finally, makes it a matter of preference and deep pockets, not of one device beating the other on all accounts.

All my comparisons ultimately do little more than to expose a component’s relative strong areas versus its weaker areas, in relation to other components. All components usually have a bit of both, and the Bryston BDA-3’s less evolved areas are delicacy and low-level resolution. Other than this, the DAC is not simply good, it is staggeringly good. It is also of great value, especially when factoring it its extensive connectivity. I mean, 4 HDMI ports and 2 USB ports in addition to the usual digital connections! The BCD-3’s superbly energetic performance strongly reminds me of the classic Wadia sound, the Wadia 27, in particular, as well as the original PS Audio PWD mkII, but with more open and more fluid treble. In my book, there is hardly a better compliment for a DAC than this.