Theoretically, since we’re talking about data packets sent unrelated to a time domain, a network cable cannot affect the sound of network transfer. It either works, or it doesn’t. But sonic differences exist and they are not hard to hear. Why? A popular theory is that it’s not the signal itself but rather outside noise that’s picked up and wreaks havoc inside the server or streamer, thereby creating interference or strain of some sort. But I’m also open to the notion that there may be critical aspects of streaming audio that we just haven’t discovered yet, just like we were not always aware of jitter.

For all my ethernet connections I use a ValueLine CAT6 S/FTP Ethernet cable which is a standard OEM brand cable, albeit one that I selected from a variety of similar cables for sounding the most concrete and most articulate. Some of the other standard cables that I tried sounded airier but less forceful and robust and others sounded overly mellow and imprecise.

Meanwhile, experiments with high-end Ethernet cables have always yielded differences but these were not necessarily found to be overall improvements. For example, the Melco C1A1 Cat.7 cable sounded warmer and smoother, especially in the midrange, and you could say that it made the music more forgiving. However, this came at the expense of an amount of articulation and propulsion which I value highly. Likewise, the AudioQuest Vodka made for broadly similar changes to the sound, when I tested it as part of the CH Precision review, and at that stage, I preferred my standard cable. The most recent Ethernet cable that I reviewed is the Pink Faun Digital Interlink LAN which injected the music with remarkable fluidity. It made for an unforced and free-flowing delivery with a decidedly non-“stereotypically-digital” sound, but ultimately, at the expense of some speed and attack. Thus, I have stuck with my standard cables. 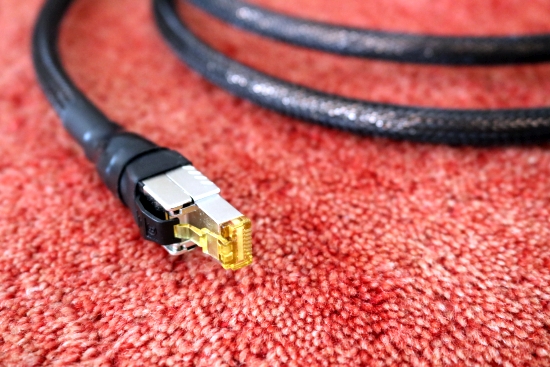 Now, the Mad Scientist has also issued an Ethernet cable. As usual, the Mad Scientist does not follow convention, and with this latest product, he has created an unusually stiff cable with a great finish that looks like it costs a small fortune. Fortunately, it does not. Starting at 399 USD for a 1-meter length, the cable costs considerably less than most competitors in the high-end scene. 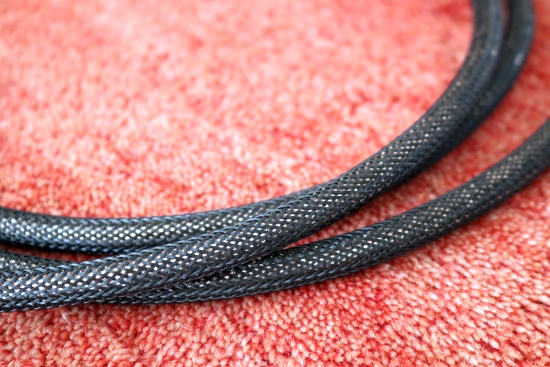 The Black Magic Ethernet cable uses solid-core conductors intended for ultra-high-speed communications, it contains a touch of Graphene and is fitted with high-end connectors. Interestingly, these are not the same as those that are used on many other high-end network cables, because the Mad Scientist thinks the ones he uses sound better! While the cable is certainly stiff, it is still bendable. As the Mad Scientist mentions on the site: “If you need to plug into something light like a router, you may need to put a brick on top”. 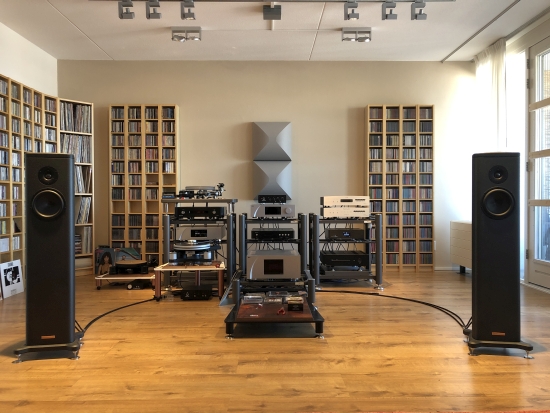 For this review, I will use the Black Magic Ethernet cable with three different servers/streamers, in all cases connecting it between the main switch (a regular and aging Linksys unit) and the component that is under test. The digital connection to the CH Precision C1 DAC will be via AES/EBU via the Jorma AES/EBU cable. The amplifier is the CH Precision A1.5, the speaker cable the Jorma Trinity, and the speakers are the Magico S1 MkII.

When substituting the standard cable for the Black Magic, I consistently use the same position on the network switch.

I’ll start with the Antipodes K50, feeding its AES/EUB output into the C1 DAC and using the standard CAT6 ethernet cable as mentioned earlier. Even with the standard cable, the K50 has a superbly fluid and free-flowing delivery. It’s got a full sound with a rich timbre and it is quite relaxed but well-differentiated and not overly mellow.

Substituting the standard cable for the Mad Scientist Black Magic, I was expecting the server to start sounding smoother and perhaps too mellow but, surprisingly, the opposite happened!

With the Black Magic cable, the K50’s sound becomes significantly more robust, with increased presence and impact. The bass becomes fuller, smoother, and less dry, but interestingly, the transient behavior seems cleaner, especially in the midrange. Further, there is increased separation and differentiation between different sounds within the soundstage. Especially this latter aspect is fascinating and leads to more emotional involvement.

Importantly, the server’s character is fully retained and not made warmer or richer nor cooler and cleaner but simply augmented in just the right places.

Next, I’ll use the K50’s Roon server section with HQPlayer to connect to the Aqua LinQ Network Interface in combination with the Core+NAA modules and finally feed the LinQ’s AES/EBU output to the CH Precision C1 DAC.

The LinQ has a supremely articulate and pure and uncolored delivery. As part of its review, I found that it is less sensitive to upstream components than most other components. Still, substituting the standard UTP cable for the Black Magic produces instant improvements.

The results are in line with those heard with the K50. Here, too, the transient behavior in the midrange is very noticeably cleaner, with percussive sounds appearing more immediate and more impactful while the soundstage becomes both wider and deeper. And just as with the K50, the bass becomes fuller and more impactful. The LinQ’s inherently super-transparent delivery does unveil that the Black Magic cable injects the sound with a little character of its own and this is expressed mostly as a thicker upper bass and juicier, riper lower midrange. As a result, especially the bass is slightly less articulate and incisive than with the standard cable, but in turn, also less dry and significantly more robust.

Whenever the sound becomes fuller there is always the fear that it might reduce the precision by introducing smear but the Black Magic cable only adds body, not blur. On the contrary, also with the LinQ, it’s again impressive how the cable manages to remove effects that sound like pre-ringing to make transients more immediate, low-level details clearer, and inject more separation between individual sounds within the soundstage.

It could be argued that the Black Magic cable adds fullness and in doing so steers the sound away from utter neutrality but it does this with such verve and it makes such a strong case in so many aspects that it becomes hard to resist. Certainly, with the LinQ, the combination works highly synergistically.

Once again, the Black Magic has an effect that is obvious even from the first bars of music. Most impressive is that the cable seems to take away a previously unheard masking effect that reduces the immediacy and clarity of transients. The result is that snare whacks and other transient sounds from the midrange and up have more urgency and impact. Along with this, as with the Aqua LinQ, the cable lends the server considerably more body in the upper bass along with a significantly fuller lower midrange. The standard ethernet cable provides a leaner balance but in the case of the Grimm, it could be argued that it is tonally also more neutral. However, is it also more natural?

In any case, because the MU1 is not only very transparent but also rather fluid, it has less need for editorialization. Further, because the MU1 with its 4x oversampling engaged sounds slightly less robust than the LinQ, a further reduction of articulation and incisiveness in the bass moves the overall sound away from the ideal balance. Therefore, even though the Black Magic cable works wonders in the midrange and soundstaging, I find it to work less ideally with the MU1. 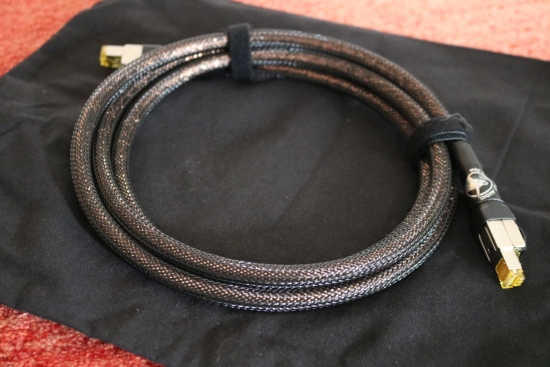 No matter which server or streamer is used, the results are evident. While the cable adds some fullness and harmonics of itself, it does it with verve and makes for a comparatively more natural delivery that works especially synergistically with the Antipodes K50 and the Aqua LinQ. The Black Magic cable makes the standard cable sound flatter, somewhat gray, and relatively unexciting. Secondarily, but arguably even more importantly, the Black Magic has a remarkable uncluttering effect in the midrange, apparently removing blur and haze to make transients more immediate and the sound more expressive. 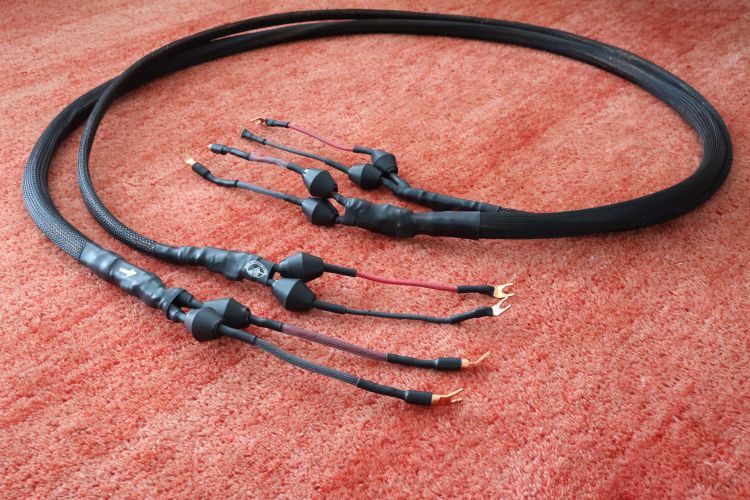