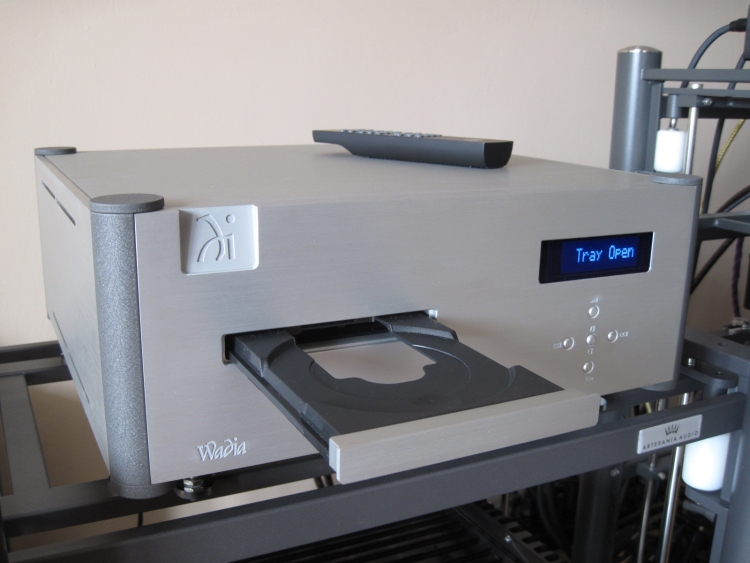 It was hoped that SACD would replace CD and revitalize the music market. Alas it did not, but the DSD format is still around. Here are my thoughts on the subject. Do note that I start out sceptical, but offer perspective near the bottom of this article, as I keep adding updates.

The SACD catalogue is nowhere near as comprehensive as the CD catalogue but I don’t think this is the only reason why the format failed. Strangely enough, nobody I asked a few years ago, knew what SACD was. The format was simply not known, in spite of Sony’s efforts. Maybe the audience wasn’t looking for a CD replacement at all. After all, mp3 had become the defacto standard for many, and it was only the audiophiles that had a craving for more. And as the small niche that we form, we are simply not a significant enough market for the SACD manufacturers. 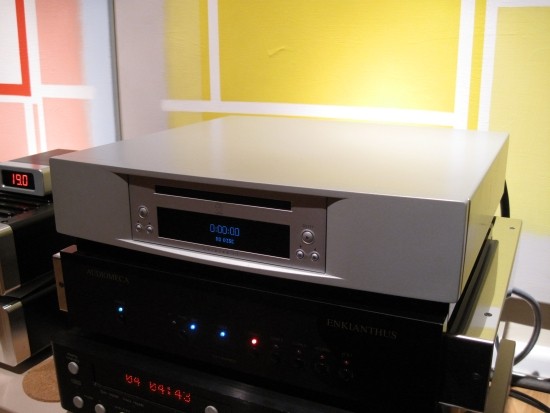 SACD sound is in many ways better than CD, theoretically at least. Of course the player has a large influence on the format’s success. For example, I am used to listening to Mark Levinsons, Wadias and dCS equipment in combination with CD sources. These players were state of the art in many ways in which the cheaper SACD machines are simply lacking. The affordable SACD players I tried, like a Denon DVD2910 universal player and the more upscale but still sort of affordable Linn Unidisk, were no match for many aspects of the sound that my older reference players and DACs were capable of. Sure, SACD’s trademark airy highs and more relaxed nature comes across most of the time, but what I usually miss is body, colour/timbral believability and dynamic expression.

To really get to the bottom of what the SACD format is capable of, I’d have to obtain an SACD player in the same reference league as my CD equipment. Sadly, until today, this never happened. The best SACD player that I heard to date, was the Audio Aero Prestige. This was really no ordinairy player, in fact it was quite expensive, but if you ask me for this particular player at least, this is more market-driven than anything else. The Audio Aero looks like a tank but is in fact lightweight. Inside is a very flimsy transport that uses standard associated circuitry. The DAC is from Anagram which is good but not great and the power supply is a little on the small side. Now I know that all this doesn’t neccesarily mean anything because it is the implementation that matters. But I mention it anyway, because the Audio Aero disappointed me heavily. Its sound is thin and gray and lacking power. If you ask me, when playing an SACD, it sounded like a CD. When playing a CD… don’t ask. So, you see, my experience with SACD is not so much limited per se, but not profound enough to be able to pronounce it a clear winner over CD. Yet. I have yet to hear the top class Accuphases, the SACD-capable DCS and the latest Wadias in SACD mode. I suspect that once I hear SACD at its best that I will be mightily impressed.

But still there is a caveat that everybody should be aware of: the software. Ideally, the disk should contain native SACD. But in many cases it is actually upsampled PCM. Sure, it should still sound better than the CD because studios often master at higher bitrates and samplerates than CD’s allow but still. This is something to keep in mind when you’re ready to buy that remastered SACD. In the best case it is a remaster from the original analog tapes, or copies thereof, which could sound very good indeed. But in the worst case you could have in your hand an upsampled copy of a DAT master, which is 16/48 and this is only very slightly better than CD, quite inaudibly better actually. In other cases the master could be recorded in 24/96 which really is a lot better than CD’s standard 16/44 but still a long way from native DSD64, which is estimated to be equal to something like 24 bit 192kHz, even if the format’s multi-megaherz figures might lead you to believe otherwise.

The trouble is that there are almost no pure DSD recordings available to consumers. This is because there is currently no way to edit, mix, and master DSD files. Only the rare DSD recordings made from an analog recording, or those recorded direct to DSD without any post-processing, can be considered to be pure DSD.

Don’t get me wrong – I have nothing against the SACD format. I only wish that all realeases were true DSD recordings and not resampled PCM sources and I also wish that the format really had replaced the CD. Instead, now it seems that SACD and CD both aren’t in for a very bright future. 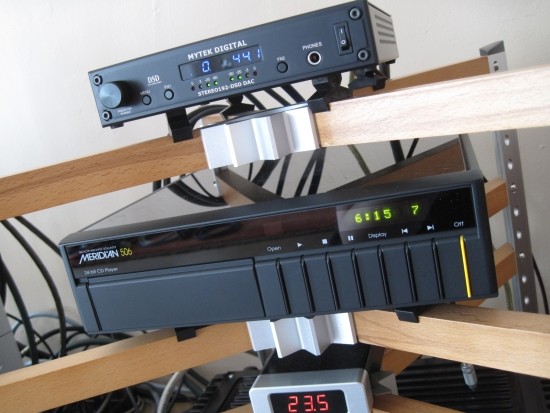 All is not lost though. SACD is based on a format that is not limited to the disk itself. The technology behind it, DSD, is also available for computeruse. In theory record companies could distribute music files online in DSD format which should sound very close to a real SACD, provided your computer has got a good sound card or a suitable digital output into a good DA converter. At the moment (july 2010) not many computer products are available for the DSD format. Korg is one of the few companies offering hardware DSD digital recording solutions. The computer use for the format is still severly limited. But this could change as soon as computer part makers decide to add DSD functionality to their chips and with the combined forces of mass production, it needn’t be any more expensive either. Let’s hope for the best! 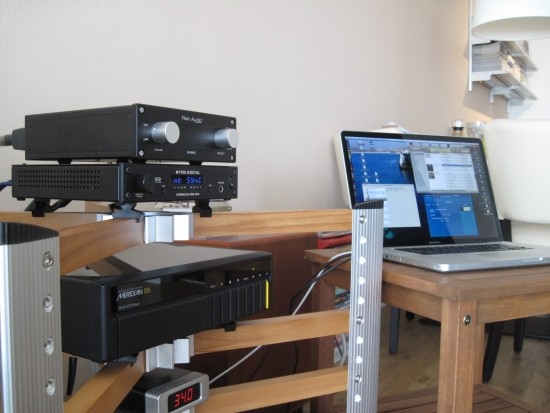 Here is an excerpt from the Mytek 192DSD review: I had quite a big collection of high sample rate WAV’s and FLAC’s, as well as DSD files to play with, and spent two evenings doing so. Rather quickly I established a preference for one of the formats and no, it isn’t DSD. Quite consistently, I heard the same good things and bad things with the DSD files: smooth, extended, finely detailed treble, a free-flowing midrange and a complete lack of digitalness as good points. While resolution also improved a notch, it wasn’t that much better. To be honest I’ve heard more impressive refinement with the Linn Klimax DS and the dCS Delius/Purcell using 16/44 PCM. It seems that the Mytek just inherently has limited resolution because I experienced the same when playing my 24/96 LP recordings. Going back to DSD, what also struck me in a negative manner was the bass. It was a bit soft and wooly and had less dynamic impact than with any of the other formats. It was this last aspect that annoyed me most, especially since I knew that the Mytek was capable of splendid bass. Well, not so much with DSD. There was less power, less articulation and less fullness. Also, transients seemed more rounded and small dynamic changes less obvious. 96kHz FLAC sounded as good as I have heard it, which is almost as good as WAV, but not quite. There a subtle rounding on the transients and less obvious dynamic attack. 192kHz FLAC had the same sound signature, but had a bigger, wider soundstage portrayal, smoother, more fluid treble but also less focused center phantom imaging. The same differences applied to WAV. Where 96kHz was an obvious improvement over 44.1kHz in all areas, 192kHz again seemed like one step too with the bass and lower midrange becoming a little wooly, just like with FLAC. The more files I played, the more obvious became my preference for 24/96 WAV. It pushed all the right buttons: powerful, deep, articulate bass, a lively and live-sounding midrange and smooth, open, extended treble. Still, there is something very magical about DSD in that it doesn’t sound like PCM anymore. No matter how high the samplerate, PCM will always sound as such. DSD is different in that there’s no perceived square-ness. It’s like looking at an Apple iPhone with Retina display, ie the pixels are so small that you can’t see them anymore. I still have hope for the format, but would probably need a better DAC to bring out the most of it. 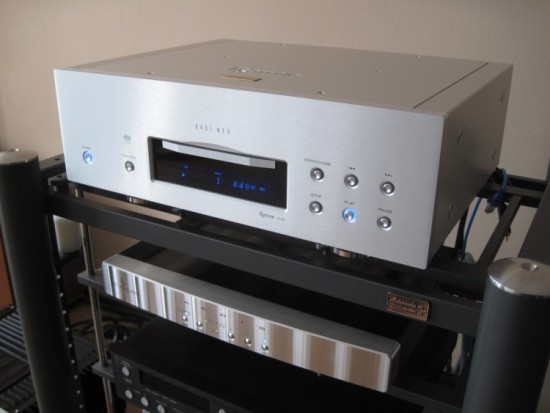 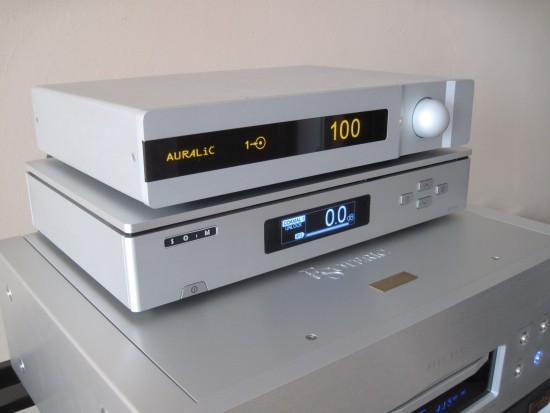 Alas I am still not convinced by the quality of DSD playback through an external DAC, in this case the Auralic Vega (device on top). This time I used the AudioAanZee Ultra Flow music server as a source and a bunch of DSD files from different sources than the ones I used previously when auditioning the Mytek 192DSD. Yes, there’s now added resolution and more air in the treble, with less harshness. But bass is still thinner than when using PCM sources and there’s a lack of colour and drive in the bass and the lower midrange.

For comparison I also played all the hybrid SACD’s that I have in the Esoteric X03 SE SACD player that is also visiting for a review. An extensive review is in the making, but in short I can say that this time, SACDs do definitely have their place and for once, bass is still forceful and midrange still colourful.

So, it seems that for some reason, DSD files played on computer-based servers (be it a Macbook Pro or an otherwise superb AudioAanZee Ultra Flow), don’t sound as good as a physical SACD on a high end SACD player. What would be the issue here? The computer source? The DSD file itself? Or the quality or principle of the DAC perhaps? 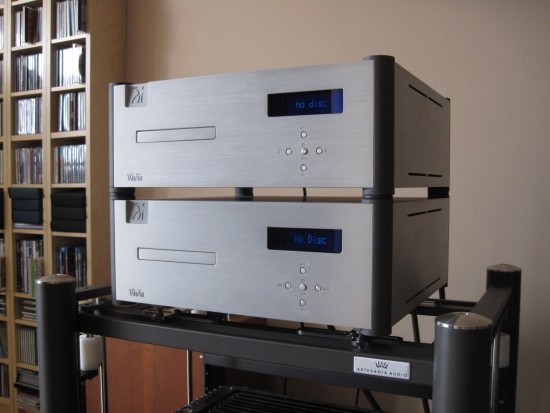 As can be read above, I am happy with the added treble refinement and air and the overall fluid sound of SACD, but generally unhappy with the format lacking power in the bass and solidity in the midrange. Along with the Esoteric X03SE, the Wadia 581 and 781 really surprised me with their solid SACD sound. Here timbre was highly convincing, dynamics very realistic and bass just about as rock-solid as with PCM formats. Is is the multi bit conversion that does the trick rather than bitstream delta/sigma? Quite possibly, but I can’t be certain. In any event DSD usually does not sound better to me than PCM but it is with these players that I really start enjoying SACD. Not every disc mind you, but this time around the format’s prime selling points were evident much more than before.

Meanwhile I have also gathered experience with Meridian Sooloos, Aurender S10 and N10 and various Roon applications and endpoints. At this stage I can confirm that when done well, DSD can certainly sound great, also on a computer or music server source, but unfortunately lots of files do not live up to their promise, either because they have been overly (re-)processed, secretly have a PCM source or other unknown reasons. In any event by now I have set DSD aside as an interesting format, but one that I do not actively collect or play, unless when conducting reviews of DSD capable products.

The Matrix x-Sabre Pro DAC and PS Audio DirectStream DAC confirm my views on DSD but also provide some interesting insights. One such insight: bitstream DACs (usually Delta/Sigma) sound best playing DSD based music while multibit DACs sound best playing multibit based music. Although there are exceptions (Wadia 581 and 781), conversion either way is usually not the best solution.