WvL Loudspeakers differ from nearly all other existing loudspeakers in their use of the field coil drive unit. The core of a WvL Drive Unit revolves around unique electromagnets, which are, by principle, superior to every permanent magnet and WvL electromagnets are among the strongest magnets available. The difference is that they are controlled dynamically and are not only static, like a permanent magnet that is charged only once. The control for the WvL Electromagnets is provided by an especially developed Power Management system that results in more precise control of a voice coil than any static magnet. 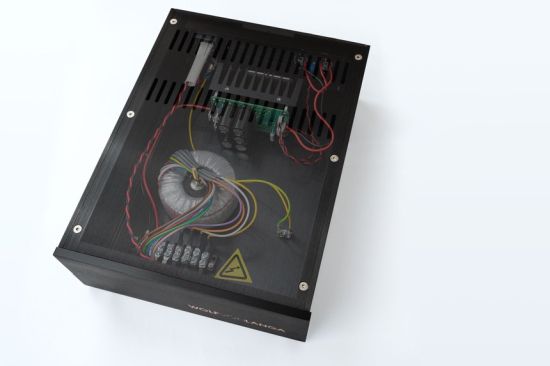 Of course, there is much more to mention on the topic of Field Coil loudspeakers and the electromagnetic principles but since this article is becoming a little long already and I’ve not even started on describing my listening impressions, I’ll refer those who want to get to the bottom of this to the below Wikipedia links to pages with detailed information.

The SONs behave similarly to other speakers that I used in this room in that they prefer to be positioned free from the side- and rear walls. With the Magicos out of the way but with the Logans still in place, the SONs were not yet completely happy. While the Magicos behave entirely linearly when in-between the Logans, no matter how I positioned them the SONs’ bass was boomier and less crisp than I recalled it from Ron’s place. This meant that the Logans also had to be moved out of the way. With that done, I repeated the SONs’ positioning process, only to find that, ultimately, they landed pretty much in the same positions as to where the Magicos were. Now, well-free from all walls, the SONs were performing beautifully.

That the Magicos worked so well in-between the Logans while the SONs do not has a lot to do with the Magicos being a closed design and them having a considerably leaner balance. Actually, compared to the SONs, MANY speakers will sound lean. In this room, bass-reflex designs have always preferred free space all around them and although the SONs are no bass-reflex design, their unusually potent bass sounds purest and cleanest when they are positioned free from walls and other objects. Without exception, so far, the speakers that I used in this room sounded ideal with only a moderate amount of toe-in. The SONs are different and sound best when pointed at the listener’s shoulders, such that the speakers’ inner side panels can just be seen. There’s a perfectly understandable explanation for this. Regular tweeters and other small drivers are usually not very directional but the larger a driver’s diameter becomes, the more directional the driver is. Although the crossover point is specified at 800 Hz, there’s still a good portion of the lower midrange coming from the bass unit and since that driver has a very large diameter, it’s simply more directional. The logical consequence of this is that the sound will have a dip in the lower midrange unless the speakers are toe-in properly. Of course, this can also be used to tailor the sound to personal liking as long as one realizes that deviations from the ideal will offset the speakers’ even balance. 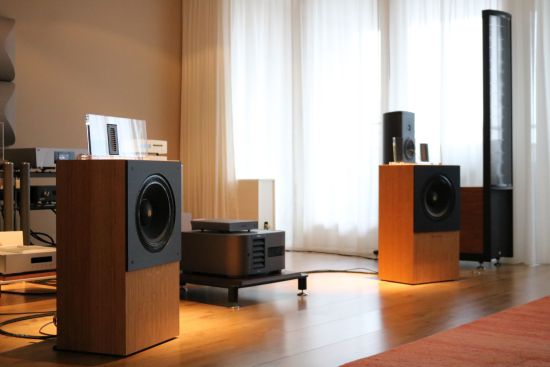 The AMT units are not directional at all, at least not in the horizontal sense. They provide an even distribution of their entire frequency range over the entire width of the 4-seat listening area and that includes the separate seat that is positioned even further to the side. And the tweeters’ range extends even beyond that. Right now, as I am typing this review sitting at a desk in the adjacent kitchen area, I am enjoying an open and articulate, near full-range sound, with only the very top slightly attenuated.

Like ribbon tweeters, the AMT’s do exhibit beaming in the vertical plane and the treble does indeed drop in level when standing up and walking around. But even then, it only concerns the top section. I’ve owned many Apogee speakers and can tell you that, due to their length, and perhaps an even lower crossover points on the MRTW units, these drop off much more severely when you’re standing up.

As the manufacturer mentions in the online documentation: “Just as a singer’s voice has little to do with the size of his body, the physical size of the brand new SON has little to do with its sound…  at only about 90 cm high, the SON is soundwise among the biggest.” In terms of power, dynamics and soundstage width and depth, I could not agree more. The only reservation that I can add is that, due to their relatively low height, the soundstage projects lower to the floor than with taller speakers. 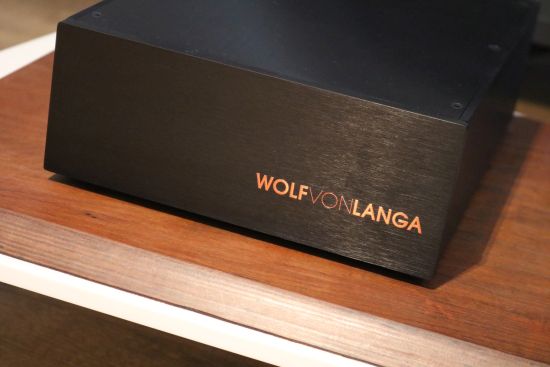 The Current Source Power Management unit came supplied with two 4-meter long DC cables to connect to the speakers. This was easily long enough for the unit to be positioned close to the power outlets. Do note that the default length for these cables is 3 meters but any additional length can be ordered as desired for 59 euros per extra stereo meter. The manual mentions that their length has no influence on the sound but I did find that the placement of the unit does matter and so does the power cable that connects the unit to the mains. 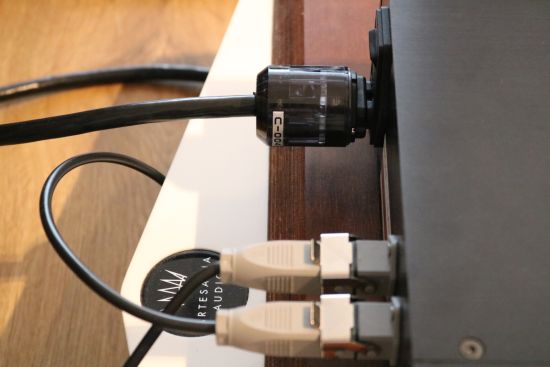 Don’t worry, the unit works just fine when placed on the floor and the speakers strut all the magic that they’re capable of but placing it on top of an equipment platform will result in audible differences. For instance, I found that placement on an Artesania Modular Floor Platform provides a more incisive, more upbeat sound with tighter bass, which I preferred in this system. Depending on the setup, however, the more relaxed perspective of floor placement might also be preferred. 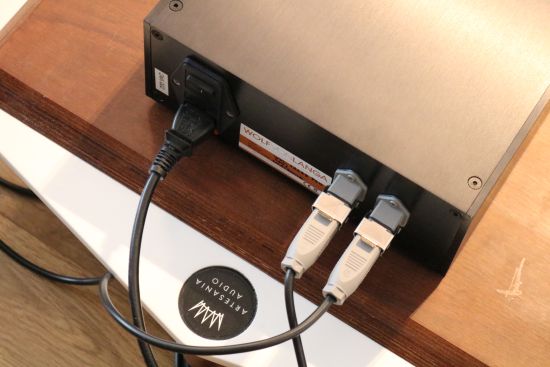 Likewise, I wouldn’t say that there is an ideal power cable per se but it is good to be aware of the differences that can be incurred by the choice of cable. For instance, the majority of my listening was done using an unshielded stock cable and that sounded absolutely fantastic. However, when I later exchanged the stock cable for a Belden 19364 with Bals Schuko and Oyaide C-004 IEC connectors, the sound became very noticeably fuller, a little darker and more sonorous. However, since the SONs have plenty of bass in this room even with the stock cable and they are otherwise every bit as transparent and revealing, I actually preferred the stock cable in this case. Your mileage, as they say, may vary. 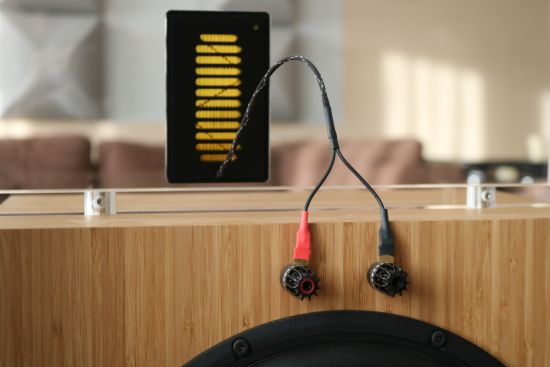 As mentioned, the SONs came without jumpers but my speaker cables are all single-wire. Thus, I dug up the only jumpers that I have and made a rooky mistake in the wiring: I connected the speaker cable to the woofer connector and used the jumpers from there to the tweeter connector. From earlier experiences, I already knew that this was not ideal, but somehow, apparently, that part of my mind wasn’t working this time. The resulting sound was impressive but not yet as linear and transparent as I remembered it from Ron’s place. 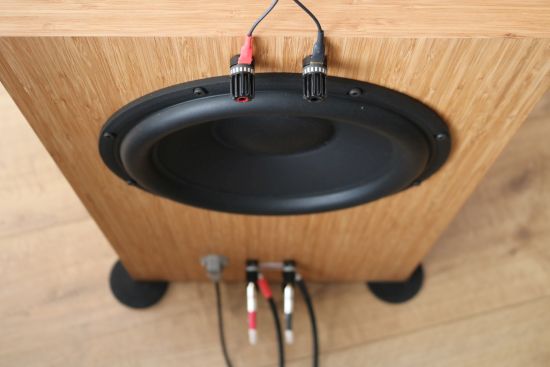 Then, it struck me: the connections had to be reversed! With the speaker cable connected to the tweeter sections and the jumpers between tweeters and woofers, the sound was immediately much improved. I knew that these jumpers were a little smooth-sounding but it had never been as severe as it was this time. As I would learn later, these speakers are considerably more revealing of such relative subtleties as most other speakers. 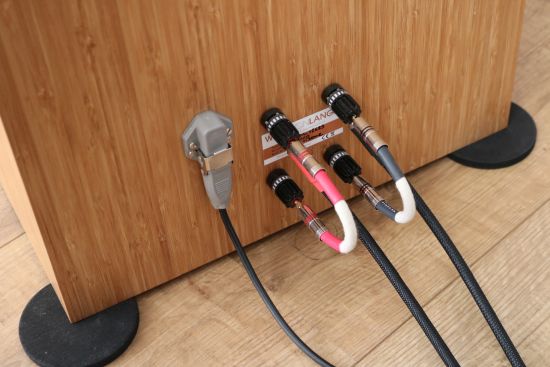 Now, the speakers were beginning to sound as they had done at Ron’s place albeit still a little rounder and fuller in the bass. But before I’ll finally start divulging my listening impressions, there was one final tweak in store: Jena Labs SpeakEasy jumpers with Cardas Rhodium-plated spades. 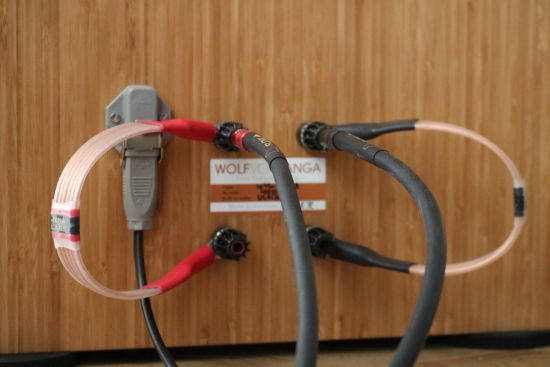 Yes, that was the missing link. With the Jena Labs jumpers in place, the bass aligned fully with the upper midrange and the sound became faster, tighter, more articulate and more transparent but most importantly, it was now entirely coherent. Now, we were cooking with gas! 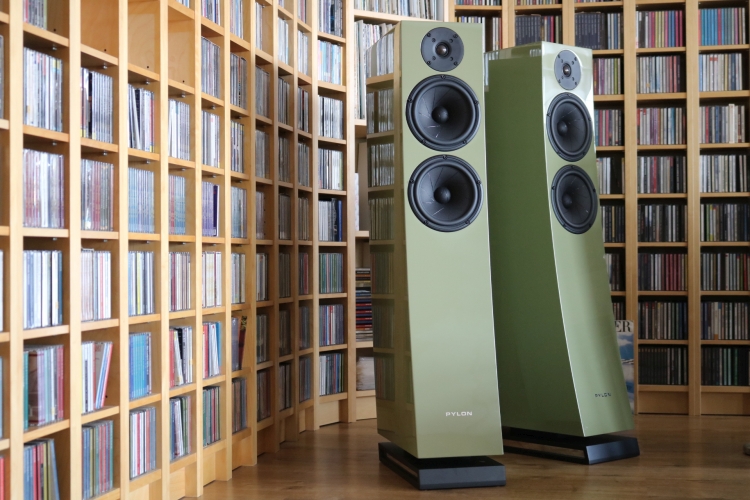 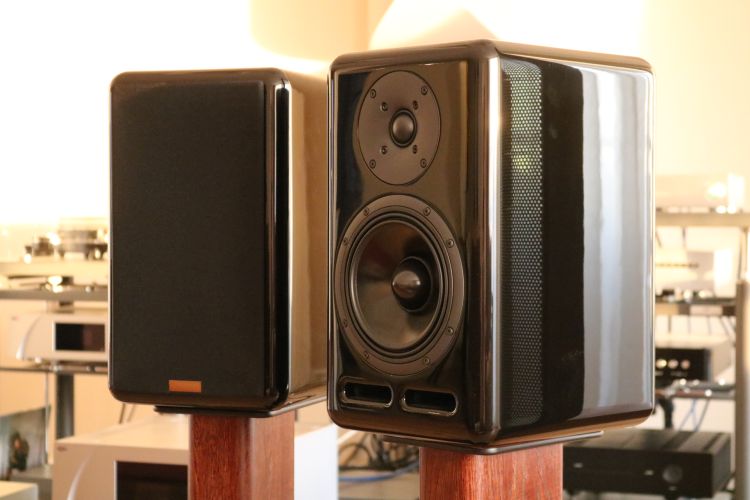