Every year when attending the Munich High-End show, the Zesto rooms always appeal to me. These amplifiers have a soothing way with music that really draws the listener in. The first time I heard Zesto was at the 2016 HifiDeluxe show in the Marriott hotel, after having visited all the rooms at the MOC. In a small room all the way up in the tower, a system of Zesto phono amp (Andros or Andros Deluxe), Leto 1.5 preamp, and Bia 120 power amp was demoed with Joseph Audio Profile speakers and all-Cardas Clear and Clear Beyond cabling. Quoting from that review:

“This was the very last room that I visited, and perhaps this system produced the most emotionally involving music of them all! Timbre was full and the sound voluptuous and almost sensuous.”

And I was not exaggerating. The years after that, the pattern persevered. Pierre Costers of Colab also noticed and got in touch with me.

Located in Meise (near Brussels) Belgium, Colab is a Zesto agent for the Netherlands and distributor for many other brands, including Joseph Audio. A review was arranged and shortly thereafter Francois Dewalque of Bel Hifi arrived to drop off four boxes, two of which were positively huge. Not that Francois gave the impression of finding any of this remotely hard work. With a Jerom-like appearance (a very strong person from fictional comic Suske and Wiske), in my imagination, Francois had one power amplifier under each arm while juggling the other two boxes by an unknown means. In reality, we used a heavy-duty trolley but Francois did unpack everything by himself and in a mere matter of minutes! 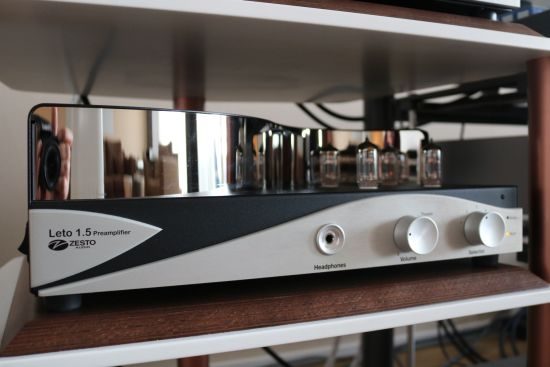 The Leto 1.5 preamp is unassuming with only the most essential functionality but as I will explain further down, its sound more than makes up for this. The heart of the preamp is formed by two gold pin JJ ECC83S/12AX7 input tubes and two gold pin JJ ECC82/12AU7 output tubes. The manual warns that these are not interchangeable and I made sure not to experiment with this. 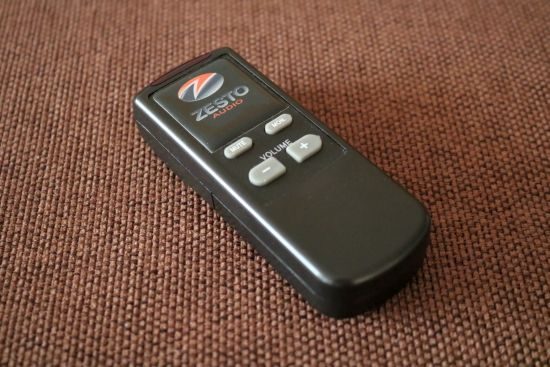 There are two transformer-balanced XLR inputs and three cinch inputs. Conveniently, the Leto 1.5 offers a dual set of cinch outputs as well as a dual set of XLR outputs, the latter again transformer-coupled. As extra features, there is a 1/4 TRS/6.3mm headphone jack output, a cinema bypass input that even works without the preamp being switched on, and independent Left/Right output ground lift switches which, I assume, disconnect the XLR signal’s ground from the component’s chassis ground. This function turned out to not only control the hum level but also to influence the sound. In my case and using XLR cables, the preference quickly formed for the off setting which results in the most free-flowing delivery. 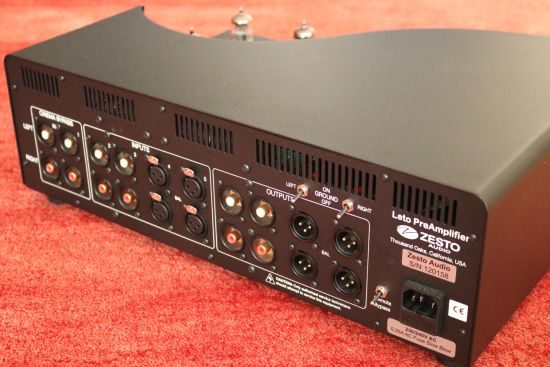 There are internal gain switches to select between 3dB and 12dB of gain. The manual describes that at normal operating volume, the volume control should read around the 10 to 12 o’clock position. If the setting is much lower or much higher than that, then the dealer or the factory can make the internal adjustment. For my demo sample, I’m not sure which setting was used nor was I usually aware of the volume knob’s setting because it was impossible to distinguish the small black dot on the knob from my listening position approximately 5 meters away. This is the only major thing that I feel is missing: an indicator LED. Naturally, there’s also an IR remote control with buttons for volume, mute, and mono. Frankly, though, for 10K, a more beautiful device would have been suitable but, in any event, it does the job just fine.

There’s a nice section in the manual about tube rolling, playfully dubbed by Zesto as “the sport of audiophile kings”. First, it is stressed that the input- and output tubes are not interchangeable, but then, the manual continues with some very helpful hints.

Since there is much debate about the advantages and disadvantages of leaving equipment switched on, Zesto added the following section which makes a case for both and leaves the choice to the owner: 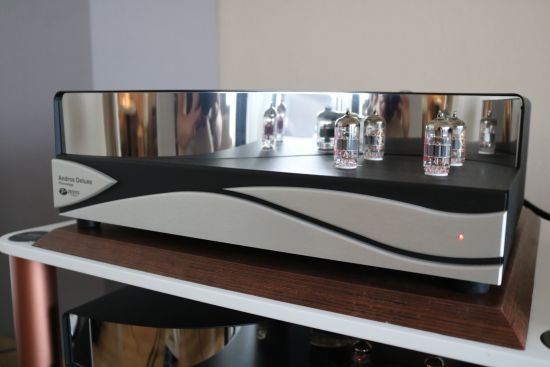 Positioned between the entry-level Andros 1.2 and the top-level Andros Téssera, the Andros Deluxe phono stage offers excellent flexibility and compatibility with both MM and MC cartridges. What the Andros Deluxe offers over the entry-level Andros 1.2 is transformer-coupled XLR outputs in addition to cinch outputs and a pair of gold pin, high gain, low noise 12AX7’s and a pair of gold pin, high current, low noise 12DW7’s, rather than a quad of gold pin JJ ECC83S/12AX7’s. On the other end of the scale, the most obvious extra feature of the top-level Andros Téssera, besides its external power supply, is that these controls are conveniently placed on the front panel and multiplied to allow up to four tonearms to be connected simultaneously. Going by the list of features it seems that the Andros Deluxe that is reviewed here is the perfect middle model. 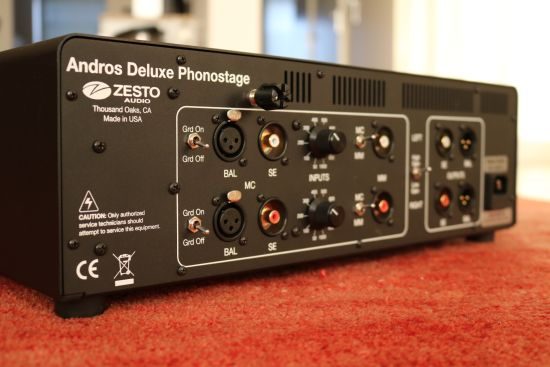 A great feature of the Andros Deluxe is that it has all of its settings readily available via well-labeled and easy to use knobs. For instance, the MM gain and loading are selected with solid flip switches and the MC loading is done, quite uniquely, with comfortably large rotary knobs. It’s a far cry from the tiny rows of micro switches that are often found inside phono stages or, if you’re lucky, on the rear. RIAA is applied passively and MC-compatibility is ensured using the same MC step-up transformers that are used in the top model Andros Tèssera. 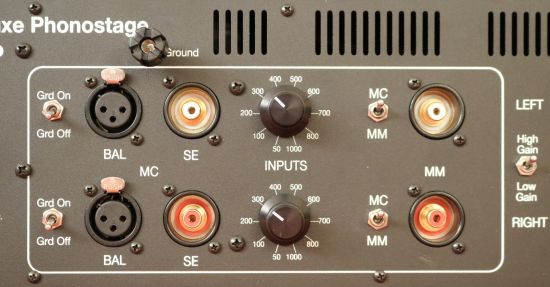 The active components are two gold pin 12DW7/ECC832 and two gold pin 12AX7/ECC83s. The manual mentions that these are not interchangeable but that tube rolling, while not recommended, is possible. In addition to the same helpful hints already mentioned in the preamp section, the manual also contains a convenient section detailing how to set the best values for all common situations and with two gain ranges for MM and MC. With 45 or 50dB gain for MM and 63 or 68dB gain for MC and with ten different loading options ranging from 50 to 1000 ohms, it should be possible to make a good match with pretty much any cartridge. 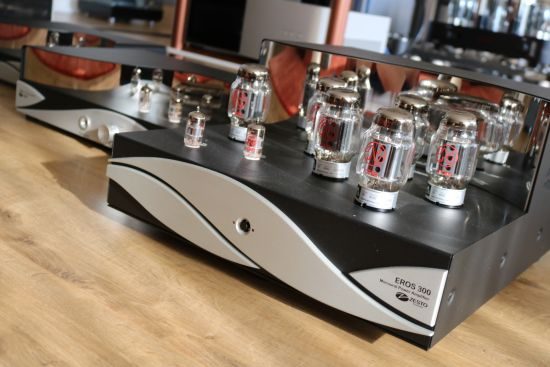 The Zesto portfolio contains two power amplifiers. First, there’s the stereo four-KT88 tube Bia 120 which I have heard on a couple of occasions in Munich. Under review here, however, are the company’s top model Eros 300 six-KT88 tube mono amplifiers. These are large and heavy beasts but with their curvy enclosures, they still maintain a friendly look. At 30 kgs each, they’re certainly not lightweight but this is much more manageable than a 45 kg-CH Precision amp or, even worse, a big Krell or Soulution amp, all of which are best moved with two persons.

With a hefty choke-based power supply and 150 watts of Class-A power achieved by six KT88 tubes in a Push-Pull, Ultra-Linear circuit, it will take a special pair of speakers to put the Eros 300’s out of breath. Francois told me that you could even run them just fine with one or two tubes missing. The tubes are auto-biased but it is not specified precisely how this is implemented. For instance, you can either continuously calibrate the tubes or only during start-up or power down and there are other bespoke methods that are said to all yield different results. Not that it matters much as there will always be those in favor of auto-bias and those against it. All I know from personal experience is that I have heard great-sounding amps using either method. One argument heard often is that auto-bias amps would sound less dynamic than fixed bias variants. Well, that is something that I have not been able to pin down based on my experience in practice. The huge upside of auto-bias, of course, is that one need not worry about matched pairs or continued manual adjustments. The amps can be connected with cinch- or transformer-coupled XLR inputs and there are 4-ohm and 8-ohm loudspeaker connections, as well as a Speakercon connector and a ground lift switch. 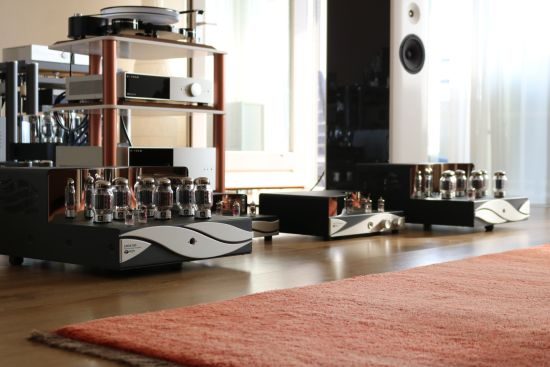 The Eros 300 amps are advertised as having “no negative feedback”. However, for power amplifiers, whether of the transistor- or tube sort, there is just no such thing. In general, feedback is used very effectively to improve stability, linearity, and frequency response. The bad reputation of feedback stems from the side-effect of introducing low-level but complex high-order distortion that comes across as unnatural. The amount of feedback that is used is critical as too little will introduce more distortion than it fixes and excessive feedback can lead to a sense of the music being overly controlled and can even add an upper-mid hardness while reducing the liveliness of the music. Also, a distinction should be made between local and global feedback.

Usually, when a manufacturer claims that an amp uses no feedback, what is meant is that the amplifier employs only feedback of the local sort and no global feedback. These methods achieve broadly the same thing but, in general, local feedback is perceived as sounding more natural. Going from the experiments that I have done with the CH Precision A1.5 amplifier and its adjustable balance between local and global feedback, I can confirm that this is the case. Broadly speaking, more global feedback improves the bass tightness and articulation while more local feedback improves the natural flow of the music. From listening to the Eros 300’s, they do indeed sound more conform to the latter.

The idle power draw (when switched on but not playing music) is 348 watts per amp and while that seems high compared to a class D amplifier, consider that many class AB amps that seem very efficient employ a very high bias current, which makes then draw considerably more power when idling than one might assume – 250 Watts is no exception. The sextet of KT88’s puts out a generous amount of heat but it’s certainly not excessive. For example, I found that the Line Magnetic LM-805 or LM-845’s or the Viva Verona XL and the Vaic Reference 520’s, all SET amps, were all much hotter. Or perhaps it seemed that way because with the Eros 300’s the heat is divided over six tubes per side rather than a single pair. Either way, you won’t burn off the skin of your finger when briefly touching on of the KT88’s and while the Eros 300 pair can certainly increase the room temperature, the amps never felt as if they were uncomfortably hot. 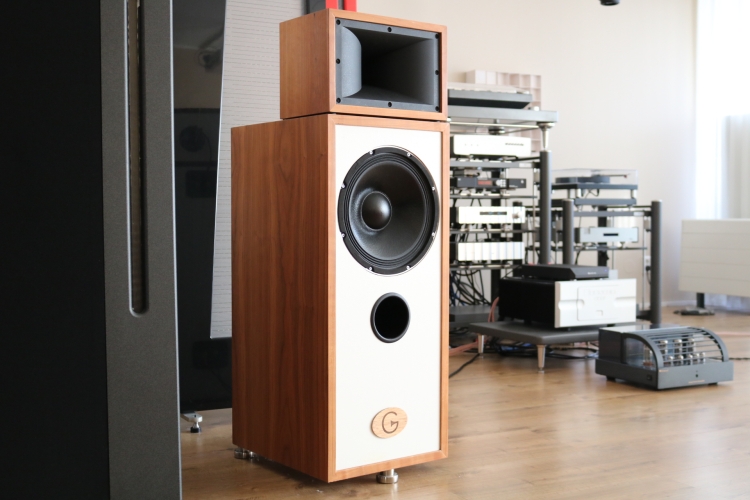