Please note that I reviewed the Corus twice! Below review is part 1, done in 2013. There is a follow-up review done in 2016 with very different results! But let’s start at the beginning. 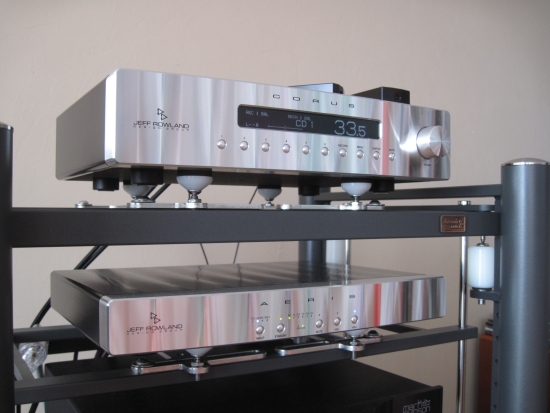 The Corus housing is very similar to the one used for the Criterion, the only obvious difference being that for the latter, the front panel controls and display were located on the power supply housing and for the Corus they are located on the actual preamp housing. Electronically I understand that there are also little, if any, differences. This means that the only practical difference between Corus and Criterion is the battery power supply.

I was very interested when the Corus came out. After all, it was an almost-Criterion at a much more attainable price. It is obvious from all sides that attention to detail is still one of Jeff Rowland’s prominent trademarks. Take one look at the remote control and infrared receiver (both machined from solid aluminium) or the superb quality of the connectors on the power supply leads and IR receiver. Naturally the front has the same appearance (and width) as the other current Rowland products. The trademark Rowland frontpanel is arguably even more eye-catching now that the front is subtly bent. Actually it isn’t smoothly rounded but rather faceted, allowing for the diamond cut, curved milling that provides that one-of-a-kind visual aspect of ever changing reflections depending on the viewing angle.

This time I restrained myself, not listening to the preamp before it had been connected to the power for almost a month, at least half of which it had been connected to a tape output from my regular Coherence II preamp. Unlike is suggested by the first two pictures, the Corus was not listened to setup on the Artesania Exoteryc rack’s top level. Instead, in order to make it closest to the circumstances of the Coherence II preamp, I set it up one level above the latter, using the same brand and type of power cord which was inserted into the same extensionblock, right before the outlet of the Coherence II. The same interlinks were used: Transparent Reference to the model sixes and Cardas Hexlink Golden 5C between Aeris and Corus. At first it was set up using the standard Artesania footers (as can be seen in the top picture) but later it was found that the Corus sounds better using Ceraballs, just like the Coherence does. Above: The remote control is also milled from solid aluminium and is a joy to use.

The Corus wasn’t listened to until I had finished the 725 review, but before listening to it with its natural partners, first I wanted to find out how it works in my current system and how it compared to my own preamp, the Coherence II as well as the Synergy II, which I borrowed from a friend.

Substituting the Coherence II, the first impression of the Corus is that it is very clean-sounding, a bit thin perhaps. But it is also superbly refined, with very good low level detailing and extended, airy treble at least as good as my Coherence II is in those areas. Like the Coherence II and Synergy 2 and 2i, the Corus throws a huge soundstage that extends to all corners of the room while maintaining superb focus and finely resolved layering in the depth plane.

So far the Corus is performing in line with what I have learned to know as the Rowland House Sound. But listening closer I notice that the treble is even more airy and fluid than that of my Coherence II, which was not what I expected. Also, the bass, while seemingly initially thin, is actually just very well-controlled and goes just as deep as the Coherence II does, but is more upbeat and articulate, if less voluptuous at it. Speaking of which: the entire Corus sound is less fleshed out, less luxurious and creamy-rich than all other Rowland preamps that I have used. Its basic character actually reminds me in a way of that of the Synergy 1, but with much more refinement, low level detail and much airier treble. Incidentally, being more akin to the Synergy 1 than to the 2i is not a bad thing, because even though I quite like the Syngergy 2i that way, it can be overly lush for some people and some setups. 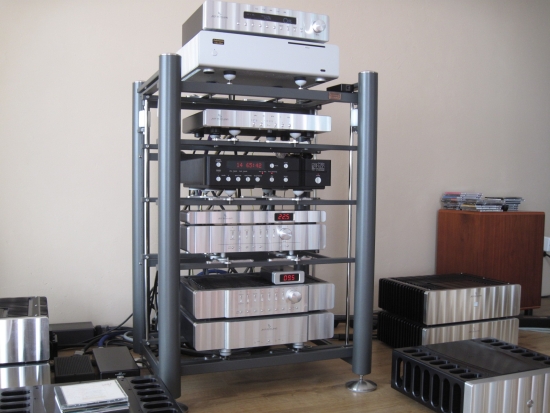 Above: The Synergy 2 briefly took the Corus’ place for a comparison.

I mentioned in the beginning that the Corus sounds very clean. I believe this is because it manages to have even less distortion than any other Rowland preamp. This idea is substantiated by the absolute silence between notes: the blacks are just blacker than I can describe. If we were talking video levels, the Corus black would be super-black. If ever there was a preamp that could not only aspire to, but actually be the manifestation of the saying “straight wire with gain” I would say the Corus is it. 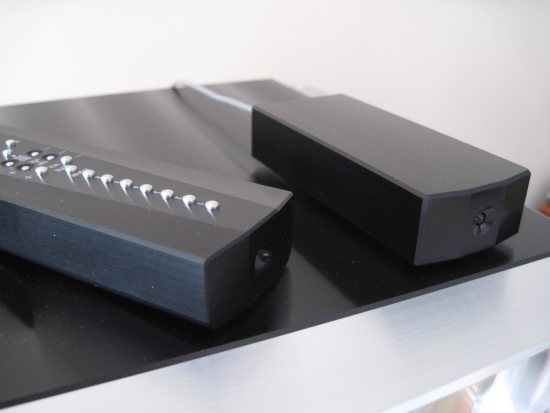 No doubt these newly attained super-low distortion levels can be attributed to the new ceramic circuit board material. It makes sense that this material is even less capacitive, allowing even cleaner sound. But is cleaner sound also better sound? Technically speaking I think it is. The Corus sounds more pure than any other Rowland preamp I know of. I know that I am admittedly more fond of character and rich colours than most audiophiles, but (lack of) colouration and harmonic richness aside, with the Corus there was always this sense of iron grip over the sound, a feeling of a bit too much control which made it hard for me to enjoy the music on an emotional level. Judged by that parameter, I must admit to finding the Coherence II, and to some extent, even the Synergy II, much more emotionally engaging.

The Synergy 2, like the 2i, is admittedly a little too smooth for its own good but it does move me in a way that the Corus doesn’t. Also, its treble is almost as fluid as that of the Corus, abeit less extended and airy. My own Coherence II, surprisingly, has less refined treble than Corus and Synergy 2 but makes up for that with better PRAT than the Synergy 2 and a richer, more luxurious tonality than the Corus. Perhaps I’m over-romantising things here and maybe my setups just demands some added character, but the point is that the Corus deviates from the course set by other Rowland preamps thus far. 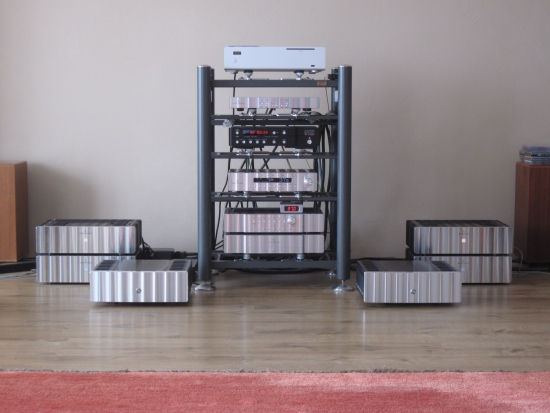 Musicality. An oft used word that indicates… what exactly? My guess will be as good as anyone else’s I guess. But for me it means emotional involvement. The feeling that music moves my soul, rather than only impressing me on a cerebral level. In proclaiming the Corus to be less musical than the Coherence II, I should add that this is in combination with my model sixes and using standard Artesania feet. The Exoteryc rack, being of the suspended kind, contrary to most other racks, actually sounds most free on its lowest level. This is why I have applied Finite Elemente Universal Ceraballs under the Coherence II. The Corus, set up one level above the Coherence, using standard Artesania feet, sounds dynamically a little constrained. So, in came the Ceraballs. And indeed, that makes a world of difference and the Corus became more dynamic and even more articulate. Emotionally however I felt that it did not move me the same way as do the classic Rowland preamps. 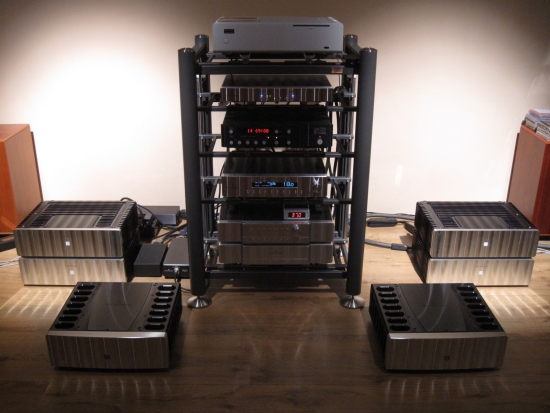 As hinted at above, the combination with my model sixes may have been sub-optimal. The sixes, as I found out during the Jeff Rowland model 725 review, are subjectively slightly loudness-like in their frequency response. Please don’t explain that as big bass, no mids and too much treble, but in effect, the midrange is indeed slightly recessed and less acoustically live than that of the model 725’s. Combine that with the super-neutral sounding Corus and I guess that the result is just less spectacular than it could be. Apparently the added power, color and rich creaminess of the Coherence 2 makes the sixes sound more voluptuous and more expressive, which translates in higher involvement for me.

So in came the 725’s and indeed, this made for a much more toe-tapping experience. Midrange, as expected, was now more fleshed out and there was no doubt that the Corus matches better with the 725s. The whole sound was more engaging, but still not to the extent of what I’m used to hearing from the Coherence II, whether it feeds the sixes or the 725’s. If I didn’t know better, I’d say that the Corus wasn’t run in enough. But in addition to being used by the distributor, it had been switched on for almost a month and playing music for two weeks. Also, I have heard an almost brand-new Synergy IIi and it sounded gloriously rich from the get-go. 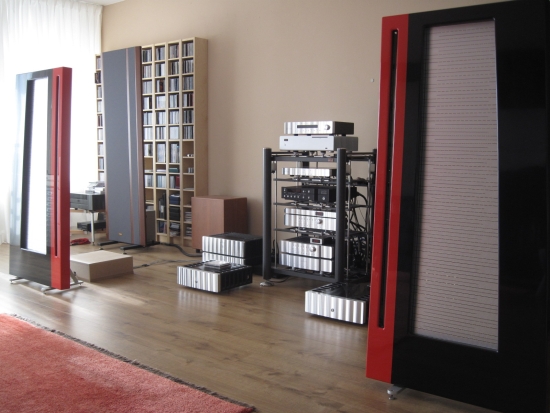 Any reader of this site will quickly find that I am very passionate about Jeff Rowland. And I would have loved to write a glowing review about the Corus, but in the end I can do no different than to simply state my observations, as objectively as possible within the realm of my personal preferences. But firstly, it needs to be understood that Jeff Rowland doesn’t aspire to any single house sound by company policy. Quite the opposite really. I recall that Jeff seeks the best solutions for the most efficient reproduction at any given point in technological advancement. But in doing so, apparently, he has still created a (slowly developing) house sound. While early Rowlands (Consonance/Consummate and model 3, 5, 7) had a very full and rich tonality even at the expense of dynamic articulation, more recent products (Synergy 2i, Coherence II and model 2, 6, 10, 12) had what I regard as the best compromise between low level detail and tranparency on the one hand and effortless, full, rich tonality on the other hand. The latest crop of Rowland products have evolved in the same direction: a more pure, more neutral, less euphonic sound. I appreciate that many audiophiles will regard this as a move in the right direction and I most sincerely concur as far as the model 725’s are concerned. For the Corus however, in spite of its pure sound and technological superiority, I must note that the move from a previously lush and sweet into a technically much more accurate, but a less romantic, urguably emotionally less engaging presentation is something to take into account.

Note:
The Super Capacitor based PSU unit can power the Corus and the Aeris along with it. This means that the Corus’ switching power supply is completely bypassed and replaced with super-capacitor power. This promises to make a large difference.

After completing this review, I changed speakers and positioned the setup on the other side of the room. At that point, I felt that the Corus deserved a second audition. Read all about it on in Part 2.

Note:
The Super Capacitor based PSU unit is now available and it can power the Corus, and the Aeris along with it. This means that the Corus’ switching power supply is completely bypassed and replaced with super-capacitor power. This promises to make a large difference and I definitely intend to conduct a followup review when I can lay hands on a Corus + PSU.