Just a week ago, I received an email from Michael Huigen of Dutch Distributor Reference Sounds with the subject “Invitation for the Wilson Audio Alexx V Listening Session”. Well, the first image inside that mail was already enough to make me decide right away to come and listen. I mean, look at this beast! 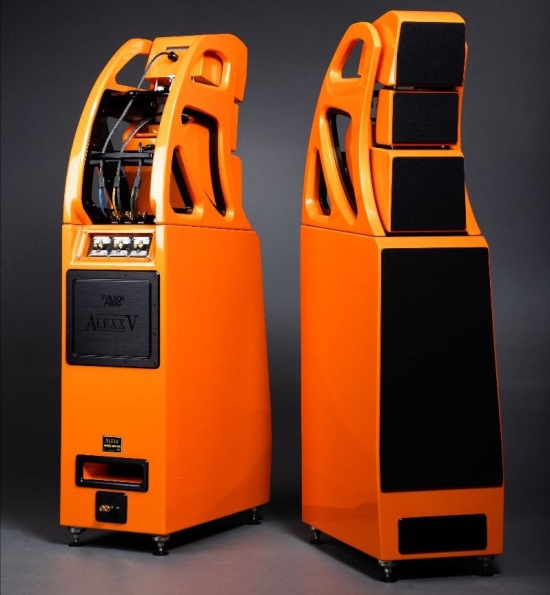 The bright orange may not appeal to everyone but of course, in true Wilson fashion, the speakers are available in a wide range of colors, such as the very classy Galaxy Grey finish below. 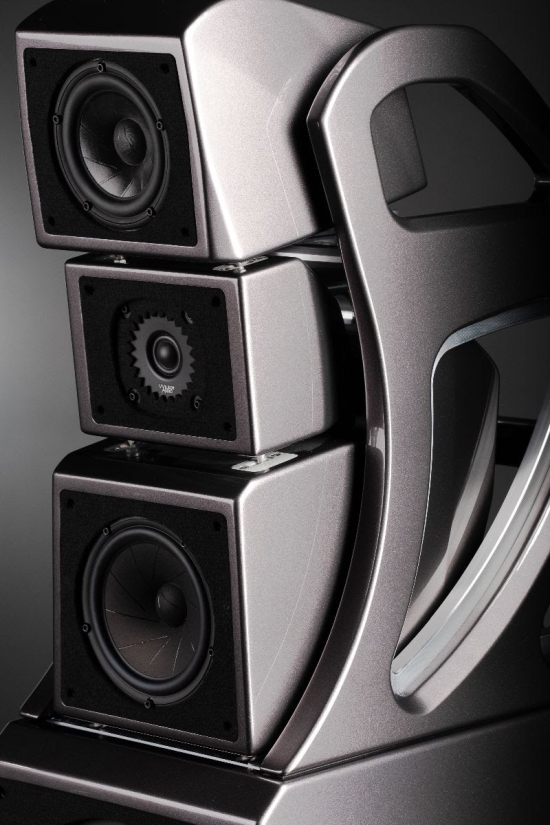 In 2016 Wilson Audio introduced the Alexx, a speaker that for many marked an absolute reference that combined the footprint of the legendary MAXX with the accuracy of the Alexandria XLF. Until then, the degree of adjustability and precision in the time domain was reserved only for Wilson’s largest models.

The key to a convincing illusion, according to Wilson Audio, lies in the time domain; a musical impulse distributed over several drivers can only be realistically reproduced if the energy of those drivers reaches the listener simultaneously and at the correct angle.

The seat height and listening distance are different in every listening room. That is why a Wilson Audio speaker allows to physically adjust the positioning and angle of the independent speaker head so that the drivers are not only time-aligned but also merge into one coherent whole. With the Alexx V, these adjustments can be made more finely and are more precisely adjustable than with its predecessor. 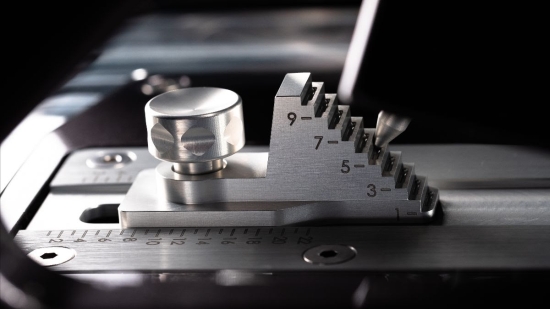 Wilson Audio never stops striving for better results and is continuously optimizing every element of a speaker’s design, always with lifelike rendering as the ultimate goal.

The WAMM Master Chronosonic and Chronosonic XVX are the most recent achievements, pulling out all the stops to develop the world’s most realistic sounding loudspeakers. With that knowledge and the original Alexx as a starting point, Daryl worked on a new masterpiece, the Wilson Audio Alexx V that was introduced earlier this year. 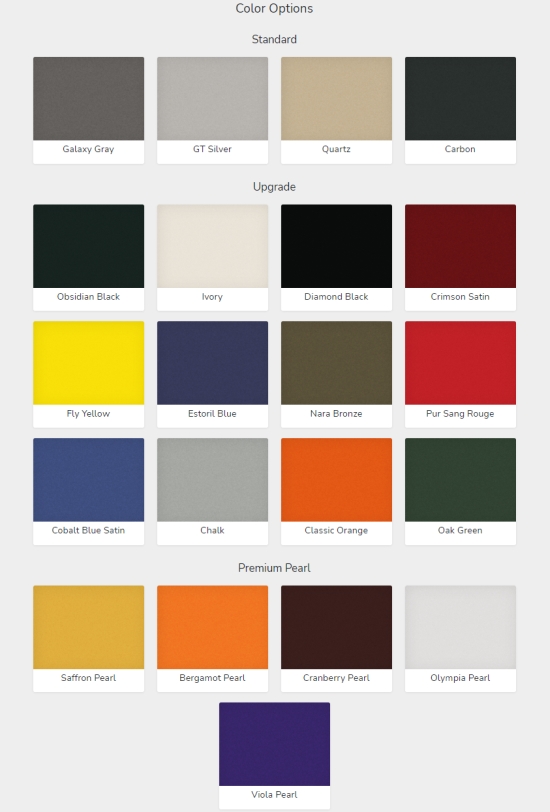 Differences between Alexx and Alexx V

Below, you can see the original Maxx on the left and the new Maxx V on the right. What you note right away is that the gantry side panels are now vented. While I personally love the open look, Wilson has provided grilles to visually fill in the cavities while keeping them sonically open, if so desired. 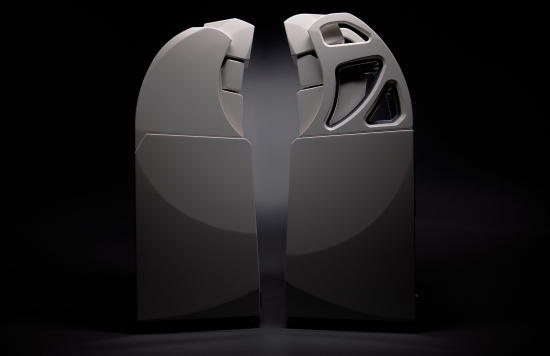 The Utah, Salt Lake City-inspired lines reflect a completely new setup of the ‘wing assembly’ – the side panel structures that together form the basis for the individually adjustable heads of the two Midranges and Tweeter housing. The panels are further reinforced with aluminum and are now open on the sides. This setup gives any acoustic energy build-up around the modules a free exit to the outside and provides an immediate and very interesting view of the beautiful adjustment mechanism. To make the correct placement of the modules even easier, Wilson Audio has integrated special LED lighting for an optimal view of the time-alignment mechanism. The open side panels can be covered with a seamlessly fitting grill after installation. 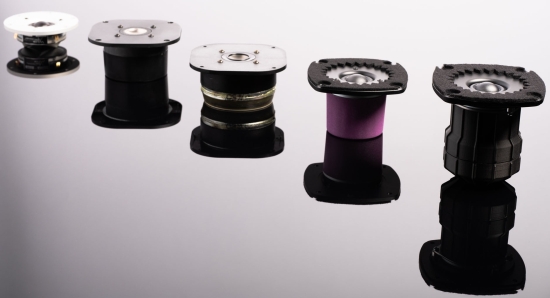 Above are the four tweeter incarnations that proceeded the latest version on the right, also shown below, along with the 3D-printed rear enclosure, shown from two angles. 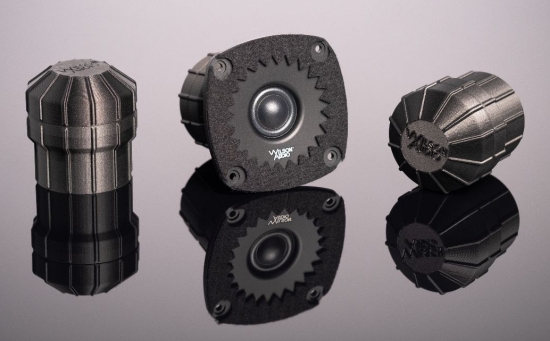 Wilson Audio’s Convergent Synergy Dome tweeter also found its way into the Alexx V. However, the engineering team has managed to further optimize this tweeter by implementing a 3D printed Carbon housing to connect with the internal air volume. Thanks to all the in-house development, Wilson Audio has also been able to further perfect the frequency range of the tweeter, especially at the bottom, true to its ideal of using the tweeter at the lowest possible frequency. In the loudspeaker assembly, the tweeter is flanked by a 5’75” Doper Paper Pulp midrange on the top and a 7″ Paper Pulp Composite midrange on the bottom. The Midrange-Tweeter-Midrange configuration is chosen with deliberately unequal midrange diameters. 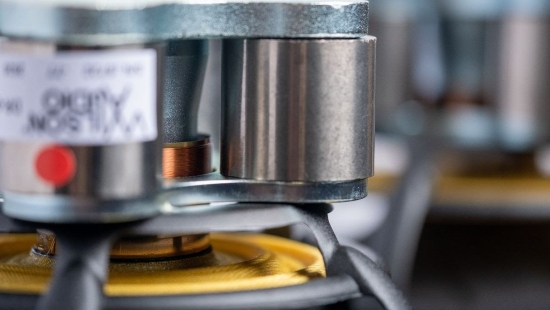 The 7” midrange is equipped with an Alnico magnet construction consisting of four small magnets around the voice coil, thanks to which the driver gives a phenomenal impulse response, very low distortion, and extremely low energy losses in the motor structure. According to the manufacturer, this gives the Alexx V a breath and openness previously reserved for the gigantic XVX.

The bass drivers are also a direct descendant of Wilson’s top models. A combination of a 10.5” and 12.5” woofer in one bass-reflex cabinet construction provides the robust foundation for which Wilson Audio is known. Thanks to the revised cabinet construction and external interconnecting cable architecture, the internal air volume of the woofer housing increased by approximately 16%, allowing the Alexx V’s bass to dive even deeper than before. 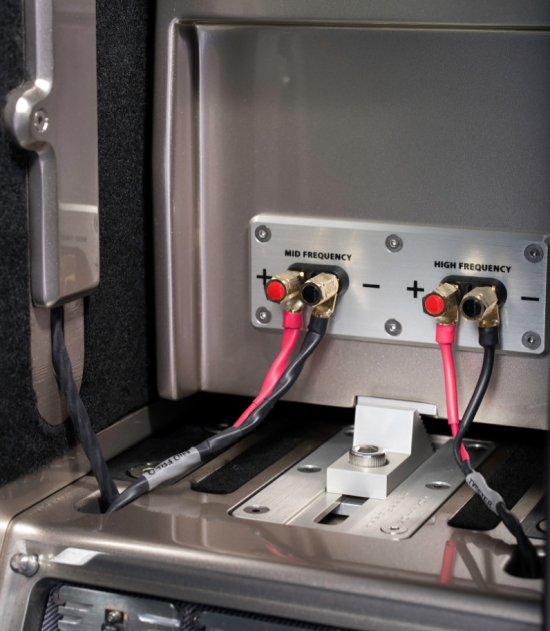 Above, you can see the old Alexx’s cable system which connects to the individual speaker heads while hiding surplus cable length in a special cavity within the bass cabinet. Below, you can see the new Alexx V’s cable system which connects the other way around: from the heads to the bass cabinet, freeing up space inside the latter. Now, the surplus cable can be pushed inside the respective head, after which lockable entry nuts make an air-tight seal. 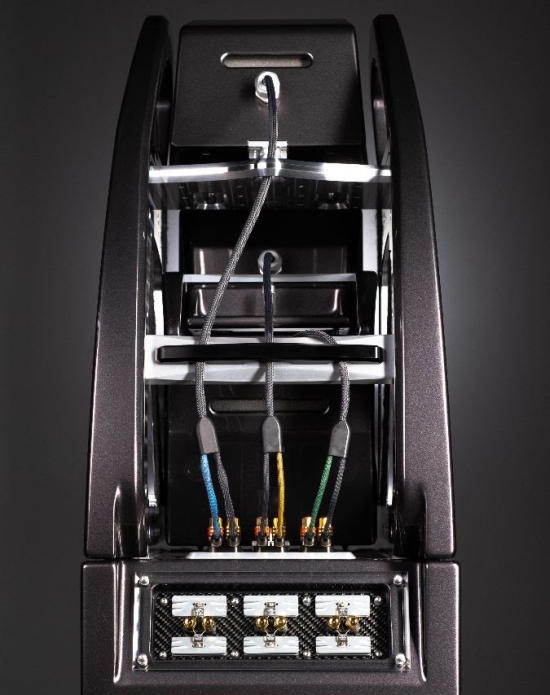 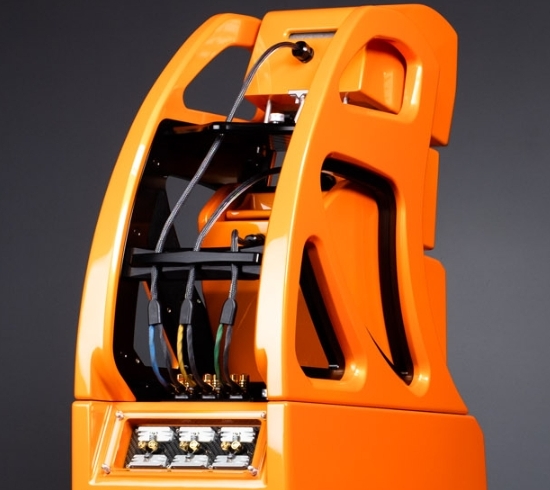 A really interesting new feature is the possibility to adapt the Alexx V on location from front-ported to rear-ported or vice versa. Just what suits the situation and acoustics best. The crossover has also been scrutinized and fitted with Wilson Audio’s proprietary AudioCapX capacitors for the very best signal integrity and virtually negligible tolerance. Extra attention has also been paid to the speaker’s impedance curve and efficiency so that the Alexx V is slightly easier to drive than its predecessor.

The absence of cabinet coloration has always been a great asset of many Wilson Audio speakers. From the very first model, extremely rigid cabinet constructions based on phenolic resin composite materials have been used. Over the years, Wilson has been able to further optimize these materials and their application by means of advanced laser resonance measuring equipment. 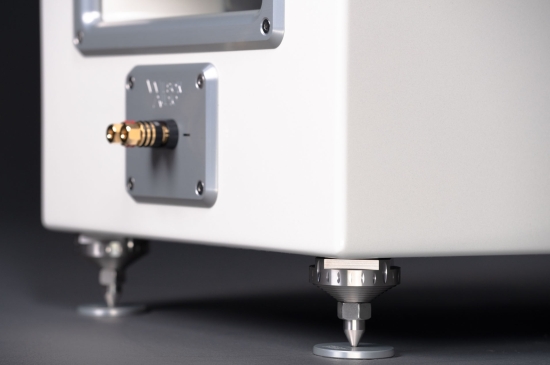 The most recent innovation in that long history is Wilson Audio’s V-material that is extremely difficult to machine, but ideal for building rigid, low-resonance loudspeakers. You can therefore find this composite material in strategic places in the Alexx V, together with Wilson’s X and S Material. 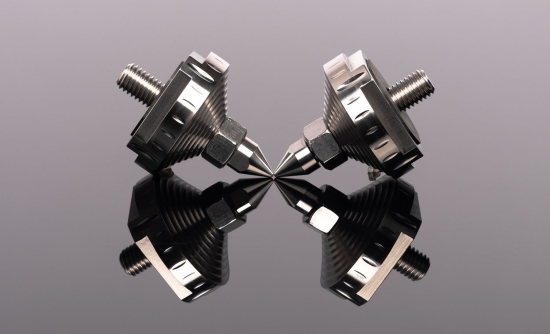 The level of engineering expertise also finds its way into Wilson Audio’s new Acoustic Diode. A completely newly developed spike in which Wilson Audio uses the new V-material combination to further help eliminate the last traces of vibration in the transition from speaker to floor. Above, you can see the development of the Wilson Acoustic Diode over the years, with the latest version on the far right. On the left, the assembly’s bi-material construction using stainless steel and V-material can be seen. 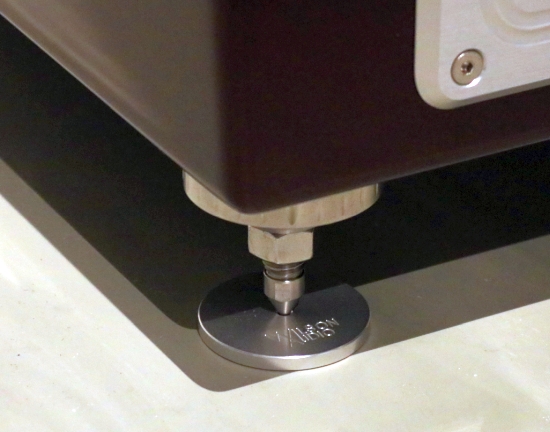 Here’s a final look at the open architecture gantry first launched with WAMM Master Chronosonic, followed by Chronosonic XVX, and which has now found a home with the new Alexx V. 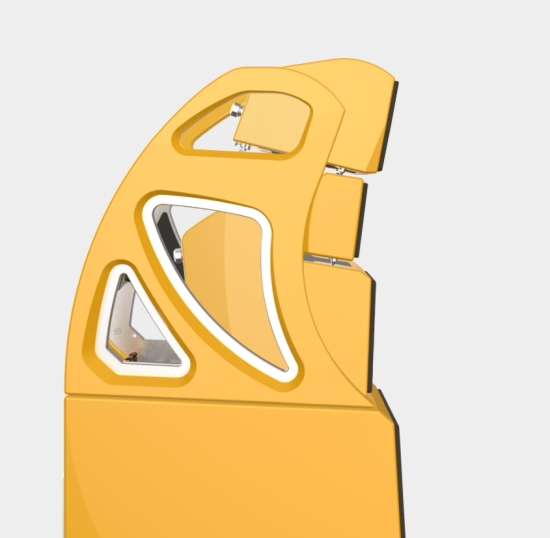 Next: Visiting Reference Sounds to hear the new Alexx V. 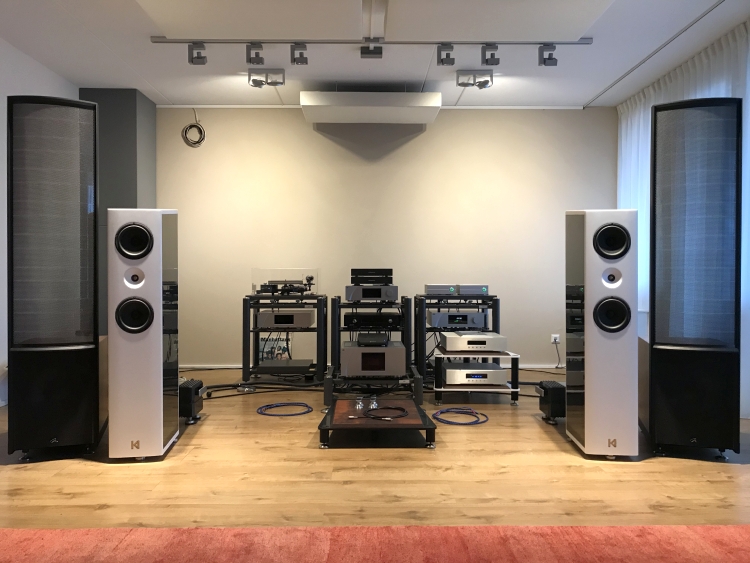