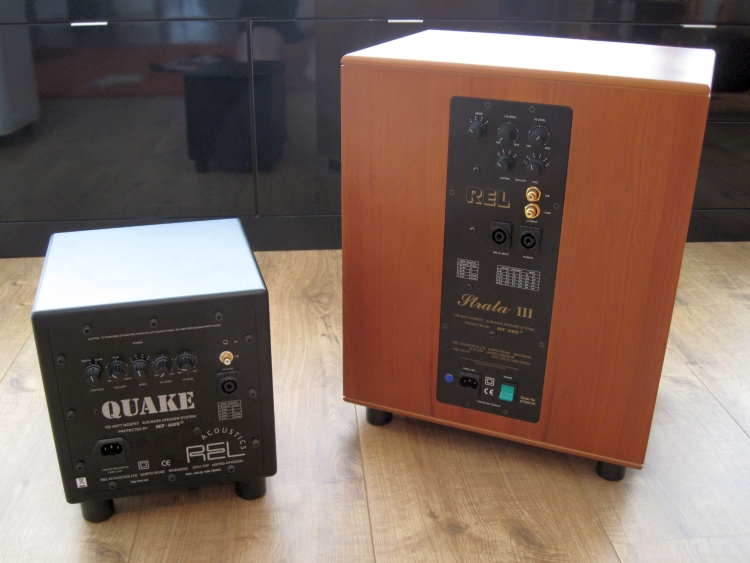 The Strata III is an older type than the Quake II but it was more than twice as expensive, and is considered by many to be better. However as always, things in audio are not always as clear-cut as we’d like. So how does the cute and compact Quake II compare to its newer little brother? 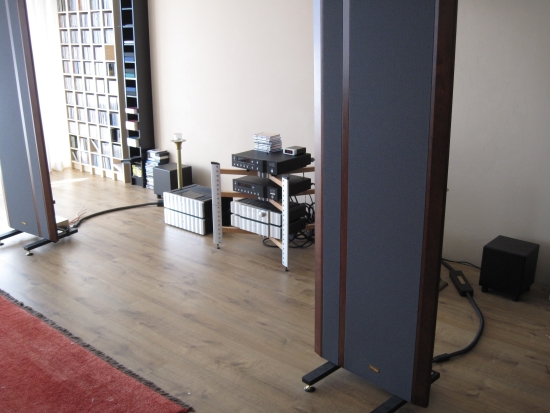 As you can see from the main image at the top of this article, the Quake II is absolutely tiny compared to the Strata III. It is basically the size of a football, although I could be slightly off there since I am not exactly the sporty type;-) The Quake II has an 11-litre enclosure while the Strata III has 1 40-litre enclosure. The difference is not small. Yet the Quake II is still capable of outputting 23hz at -6dB which is truly remarkable! The Strata II manages 18hz at -6dB though. Not a lot of subwoofers reach that low and even fewer full range speakers do. 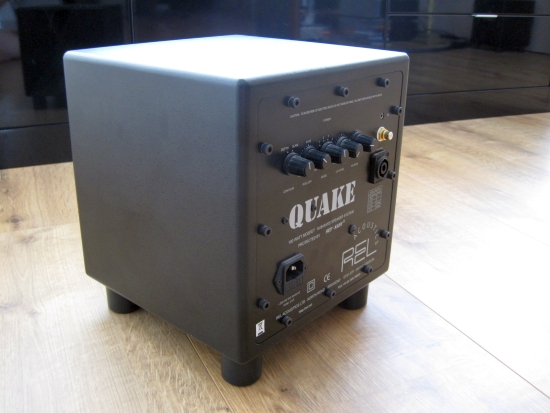 The setup in which the subs are not only tested but used on a regular basis has Magnepan MG3.6R full range magnetostatic speakers. Although they go down quite low (for a planar speaker) their midbass and deep bass is definitely lacking body and power. Every time I listen to the B&W N804’s that are set up in the cinema room, I am reminded of this. Hence the need for subs. I have to admit that I was sceptical about the Quake II’s. I was certain that they would be too boomy and wouldn’t match well with the planar speakers I used then, the Martin Logan SL3’s. The subs weren’t bought for hifi use but to complement the small speakers I used for home cinema back then. Just for laughs, I once connected the subs to my main system and was stunned. Even the tiny Quake II’s provide genuine 23hz low, pure and uncoloured, highly neutral and superfast bass. I have been hooked ever since. When I bought full range magnetostats the need for subs became more severe. Previous Magnepans had always had loose bass but weren’t clinical. The MG3.6’s are. They are very tight and fast in the bass but in the process sound just too dry and lean for my taste. So, in come the subs again. The Quake II’s match with the Magnepans splendidly. You really cannot distinguish where the speaker ends and the sub takes over. But I still hankered for more. I wanted more body, fulness and colour in the bass, just like B&W always does so easily. Good though the Quake II’s are, they were just a bit too neutral. Of course that is a good thing in itself, but I wanted to compensate for the Magnepan’s inherent leanness and clinical quality and the Quake II’s are just too self-effacing and neutral for that. I almost sold the speakers to go for big B&W’s but managed to recapture my wit and decided to look for bigger subs instead. In comes the Strata III. 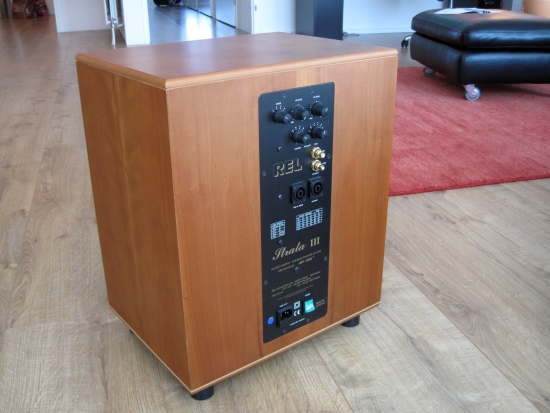 Upon first listen, using the very same settings, the Strata III seems to extend less deep than the Quake II. It has better midbass articulation but less low bass. This is strange for two reasons. First, the Strata III has a much bigger cabinet, larger woofer and officially digs deeper. Second, midbass shouldn’t be coming out of the sub since it is set on 36hz. But stranger things happen in the audioworld and it it probably just a case of improving the bass coming from the Magnepan in such a fashion that the midbass is tightened up. But less low bass? I couldn’t believe it. So I tweaked the filters until I achieved the same low bass extension as the little Quake II had. This involved a much lower filter setting (23hz) and much higher gain. But boy was the sound ever enjoyable now!

The Strata isn’t as neutral as the Quake II. It has more body, colour and substance and makes itself disappear less. You really have to tweak the knobs at the back just so, otherwise the Strata will make itself heard, and not in good way. Usually there is a tendencey to set the filter too high and level too low. I made the same mistake. But once you got the setting right there is no turning back. The Strata’s underpin the main speakers majestically and effortlessly produce extremely deep bass notes with perfect pitch.

As mentioned above, the Strata III isn’t as strictly neutral as the Quake II. It has a “bigger” sound, but also more colour and seemingly harmonics added to the sound. This is strange since the filter is set so low but I can imagine that the bigger cabinet plays a role here. But for my purpose this extra amaount of character is very welcome since the Magnepans are a bit lacking in that area.

When switching back and forth between the Strata III and Quake II, both now set to their respective best performance (which means different filter- and levelsettings) it is sometimes difficult to choose which is the better sub. The Quake II is so very neutral that you just cannot make out that there is a sub playing, you hear super-deep and powerful bass but it is totally without added colour or character. The Strata III sounds much more present and adds some character. So on the one hand a more neutral speaker is a better speaker right? Just the same, when going back to the Quake II, the music sounds less interesting, drier, flatter and less real. It is almost like comparing a Cardas cable to a Nordost. Which is better? It is a matter of taste, mostly. Could this be the contradiction between “musicality” and “accuracy”? Maybe. To an extent. Because the Strata III not only sounds fuller, more majestic and more inviting; it also provides more clues as to frequency pitch and is more rhythmic. This is not to say that the Quake II’s are slower, quite the contrary in fact, but the Strata III makes clear where the Quake II is lacking: articulation and power at really low frequencies. It goes low but loses power and articulation in the bottom octave. You don’t notice this until you listen to a better sub. But as always, buying something better doesn’t neccesarily give you better sound. The Strata III will put your audiophile patience to the test. You really need to set them up carefully or they will appear less well accomplished than the much easier to set up Quake II’s. 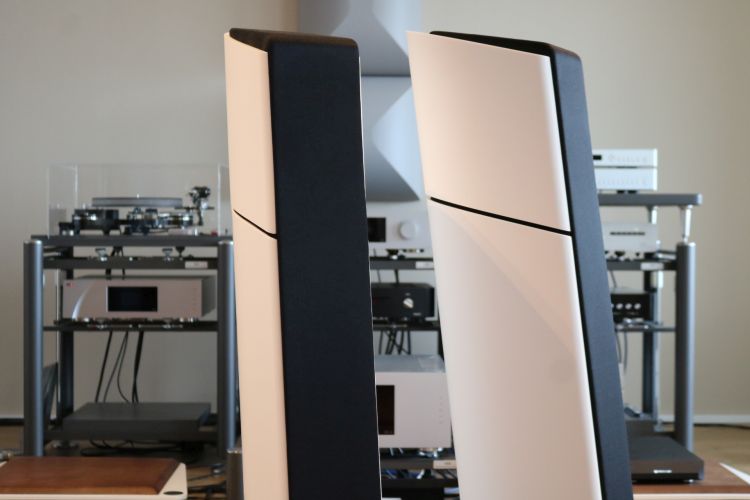 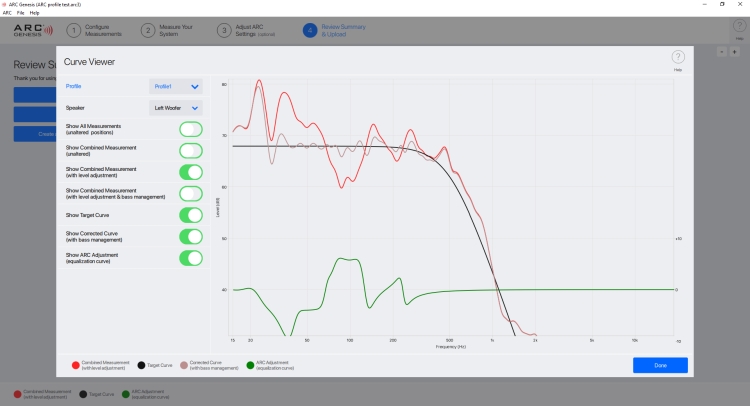 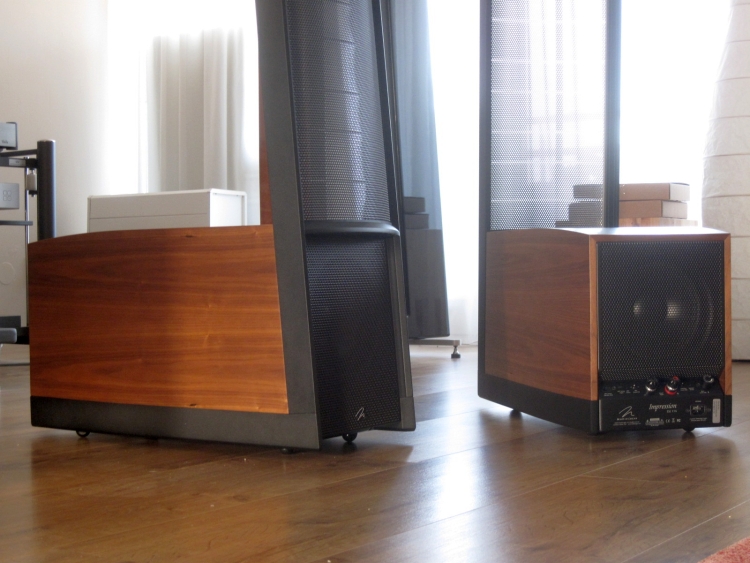 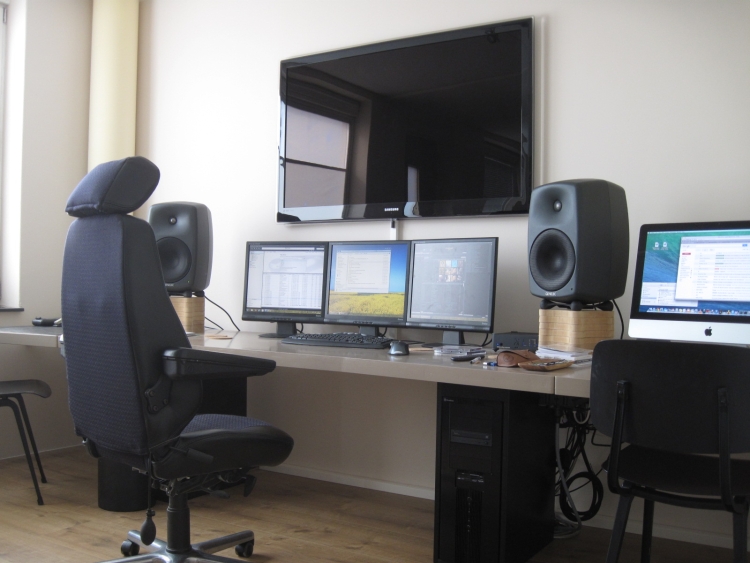 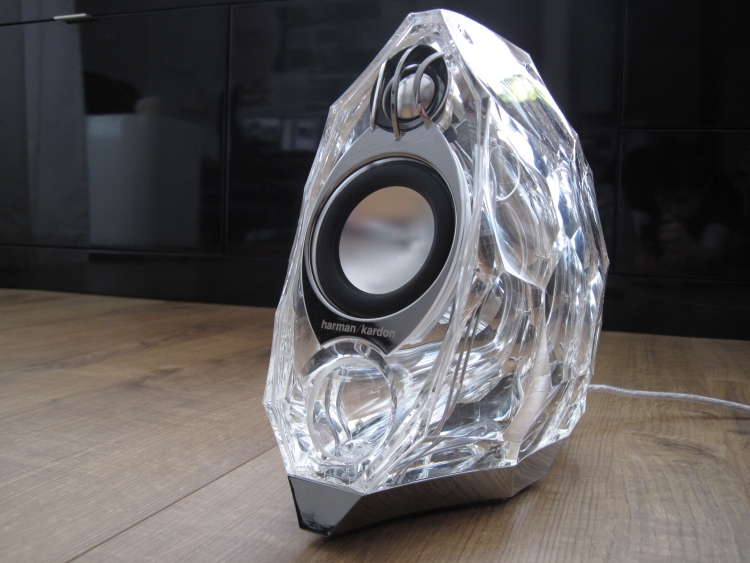