The PWD initiated quite a chain reaction

Network cables, switches, power cables, and NAS placement were all examined and found to have an influence on the sound. Here is the final installment of the PWD review.

In the meantime, I had received an Audio Synthesis DAX Decade DAC for review. It is an older model that was completely revised by the factory a short while ago. The DAX is incredibly natural sounding, with a smooth, relaxed signature not unlike the Levinson no.360S DAC but more relaxed still. The DAX combined what I recall the Audiomeca Enkianthus X DAC to sound like with the richly textured and luxurious sound of the 360S. In a word: it combined transparency and openness with fluidity and relaxation. Very seductive indeed. What’s more, the DAX also had the super-airy and open treble that the 360S has. And that made me doubt the PWD again. I did like its solid 3D sound but did’t like its restricted treble response. It seemed like it was open until a certain frequency and was hard cut off above that, no matter what filter type was selected. Even the Wadia 27ix DAC managed to sound a little airier, even though all Wadias are somewhat on the dark side due to their DigiMaster filtering. So, I was ready to write my final conclusion until…

Before I even opened up the PWD, I had ordered new fuses. 2x 1A, one for digital and one for analog. I chose Hifi Tuning for its smoothness-inducing quality and the pure silver versions for what I hoped to establish a more open treble. The fuses are covered by a plastic cover and upon lifting it I was in a for a big surprise. Inside were AHP fuses! Apparently, the previous owner had already replaced the original fuses with AHP ones. Regular readers of this site probably already know that I find AHP fuses to sound incredibly dynamic yet definitely shut-in in the treble. For unknown reasons, they just lack air and extension. And indeed: upon swapping them for the HT fuses: GONE was the treble ceiling. In its place nice sweet treble with good extension. It still wasn’t the equal of my Levinsons or the DAX, but it now at least matched the Wadia’s treble response and even improved on it a bit.

The PWD was happiest on the top level of the Spider rack. Also, because it is already very dynamic and can tip over into a little dryness, I found it to sound better when placed on the rubber interfaces than on Ceraballs. It also sounded good on its own feet when placed on top of another component. 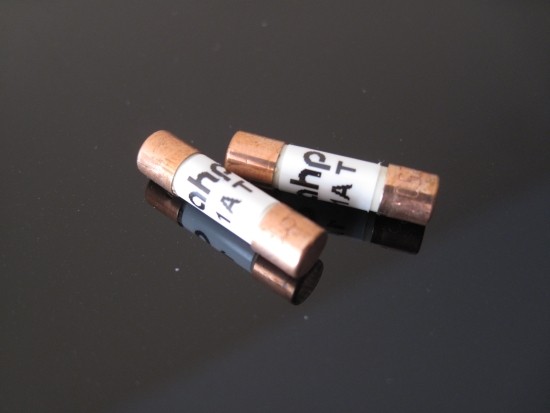 Above: the culprit! These are the main reason for me finding the PWD to sound too dry and too dark. – Don’t use AHP fuses if you want to maintain treble airiness in general and definitely don’t use them in a PS Audio PWD. Just use the standard fuses instead or go with Hifi Tuning.

The PWD demonstrates very clearly why it is important to maintain the musicdata/clock integrity. Just like when comparing integrated cd players to separate transports and dacs (all things being equal) the integrated players will win in terms of pace, focus, soundstage and dynamics, likewise it is with the PWD. Compared to all other computer audio playback solutions I have heard, the PWD managed to sound most dynamic, most lively, most 3D and it also has the most solid bass, and best PRAT. Also, it never sounds anything but entirely real, there is no artifice of synthetic signature here. The only area in which it performs less well than 10.000 euro reference dacs is in the treble and the way it instills a luxurious quality into the sound. The PWD’s digital part functions so well that I wouldn’t easily go back to a separate computer – usb interface – da converter solution. Compared to the PWD, such solutions sound slightly synthetic and uninvolving. That said, using a USB interface permits for using a reference DA converter and it is when doing so that it is revealed that the PWD’s output stage is high-end rather than reference class. All dacs here managed better refinement and harmonic ripeness and smoother, more airy treble but all these dacs stayed behind in dynamics, bass solidity, soundstaging, focus and PRAT.

Overall, and all things considered, I can’t pronounce the PWD state of the art but I can say that it beats all other solutions out there and it can only be bettered in some areas by much more expensive DACs. But of course that isn’t fair because the PWD has been built to a price point and at 4300 euro already offers an incredible amount of quality that I hadn’t actually figured to be possible before. After the Ayre QB-9 USB DAC, the PWD is the second device to make me want to listen to computer audio without having to use a reference dac.

For my taste, the PWD lacks that last bit of luxurious harmonic ripeness and it could have a tiny bit more air and it is for these reasons that it will not replace my CD player but rather complement it. The PWD did show my Levinson no.390S cd player a thing or two about dynamics and pace so I really can’t say that CD replay betters the PWD on all accounts. Rather, it is a tie. 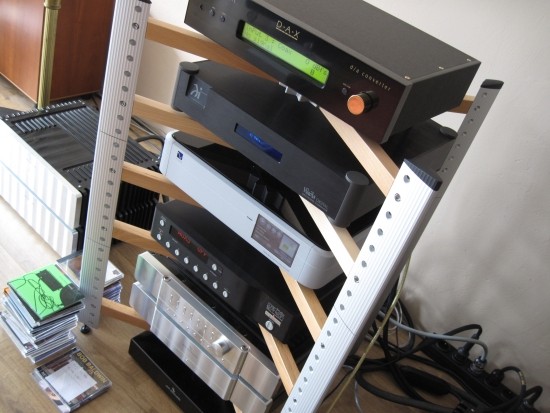 In September 2011, months after I finished the PWD review, I started reviewing two Naim streaming audio products: the Uniti and UnitiQute. The latter also has a spdif digital output and proved a very nice player. It immediately occurred to me that I should compare its streaming capabilities to those of the PWD. An extensive review can be found here but for now, I’ll compare the UnitiQute, streaming audio into the PWD’s coaxial digital input to the PWD doing the streaming duties itself. The source is the same Synology NAS, with the same cabling, connected to the same switch.

What’s very typical when switching between the PWD’s inputs, swapping between UnitiQute and PWD, is that the basic sound, the tonality, is highly comparable. The sound is highly detailed and remains lively and dynamic; the bass is powerful and there’s lots of drive and the soundstage is wide and focused, no matter which streamer is actually streaming. The PWD’s dryness and lack of air in the treble is still there, indicating that the PWD’s DAC (and its output stage) is probably the culprit, not the digital audio retrieval and transport, again making me wonder what the PWD would be capable of if it had a digital output.

The streamers weren’t entirely alike though, the PWD still winning out in terms of presenting a more living and breathing soundstage that spaces out instruments better and is more free from the speakers and it is this aspect that reminds me more of CD when done well. This, in turn, indicates that there might be something to PS Audio’s approach to streaming audio (the Lens in particular), seemingly indeed making the music more musical. In its defense though, the UnitiQute has the disadvantage of having to push its signal over spdif while the PWD has I2S internally, as well as the lense technology. Seen in this light, it is impressive how well the Unitiqute holds up. Especially speed and drive (PRAT) are unhindered and that is something that doesn’t come naturally with all digital sources.

Indicentally, with respect to my only criticism of the PWD I’ll jump to one of the conclusions in the extensive Naim review. The UnitiQute, when used with its digital output into the Levinson 360S DAC, is richly colored, fluid and supple has no dryness whatsoever and has excellent treble airiness, but trades in some dynamic attack and acoustical live-ness in the process. I’d say that this goes a long way toward proving that I’m not exaggerating in my comments about the PWD’s treble performance.

Read more about the Naim Uniti and Naim UnitiQute.

The MKII update has now been installed. Read the extensive report here. Also, see the comparison between the PWD (MK1) and Linn Klimax DS/0. 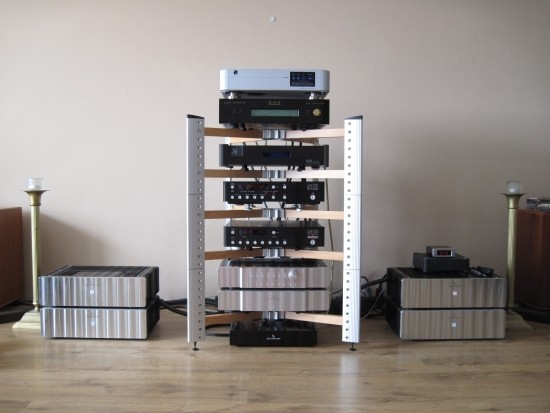 The PWD with the current firmware doesn’t play gapless. To me that’s not a big deal as I’m really mostly about the sound quality. But for some people, this may be a dealbreaker. For those people, I’d say: hang in there: according to the people at PS, gapless will be possible in the future.

I found the stability to be less than with the Olive 04HD. But that may also be due to the added complexity of a NAS and associated network matters. Either way: like any computer I suppose, the PWD is not 100% stable and sometimes needs to be rebooted. Also, the iphone/ipad app crashes sometimes or loses connection to the PWD. Still, I find it stable enough to work with pleasantly.

The PWD’s sonic signature is present not only when using the bridge but also when using any of its regular DAC inputs such as coax and AES/EBU. Despite the similarities, I did find the Bridge to sound better to my ears.

Throughout this review, the music source for the PC was always its built-in hard disks while the PWD was tested with the very same drives inside the PC, as well as a Macbook Pro and an external NAS. Pretty large differences were heard but it wasn’t until later that I compared the various music file sources playing back in Winamp 5 on my main PC. As it turns out, the NAS source sounds lighter, airier and tighter than the PC’s built-in drives. The latter sound more mellow, smoother, more relaxed and fuller in the bass. Exactly, you guessed it: the very same differences as noted when comparing the PWD with a NAS vs the libraries on the PC. Just why this is I cannot comprehend. I can tell you however that these differences are easily heard, even when listening off-axis with one ear. Which is better depends on taste and the rest of the system but I am here to tell you that the differences are very real.

I found that the PWD needs and deserves good interlinks and powercables. I used Transparent Ultra XLR interlinks throughout the tests but also experimented with other cables such as Cardas Quadlink 5C. The Ultra was best liked for its combination of smooth and airy treble while maintaining speed and dynamics. There was no sign of compression so clearly the PWD’s output stage is robust and is well up to handling filtered cables like Transparent. Ultimately though, I feel that the somewhat dry sounding PWD can use even more mellow sounding cables than the Ultra. The PWD was very sensitive to powercables and I tried many. Harmonic Technology Pro ACII was very nice: warm and smooth, but it lacked speed and dynamics. Echole Obsession was very good: open, airy, fast but ultimately less musical than my current favorite Furutech Alpha 3 with Furutech gold connectors. Placement was always on a Spider rack and various feet were tried. My normal favorite Ceraballs yielded too much dryness while the standard Finite’s RCI rubber feet provided a smoother sound. Currently I like the super-soft jelly-like Jeff Rowland feet. They lend more creaminess and subtlety to the PWD and restore some of the missing air. Be aware though that these feet also take away some dynamics and bass articulation. For me that’s ok but they may not be the best solution for all.

While I normally vote against FLAC and feel that WAV sound more lively and precise, with the PWD the cards lie somewhat differently. The PWD is already so lively and dynamic that it can be too dry at times. FLAC helps ameliorate that.