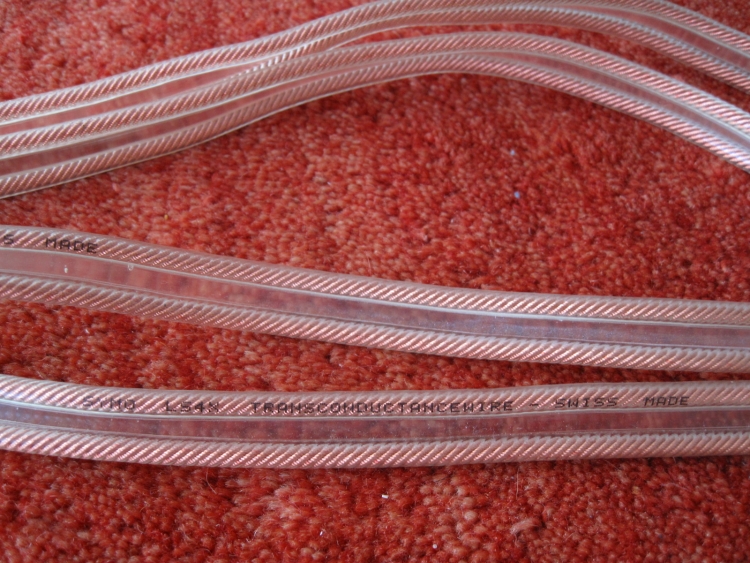 Owners of Apogee Acoustics speakers however will likely know what this is about. Here’s a review of the two cables that Swiss company Symo made apparently especially for Apogee. 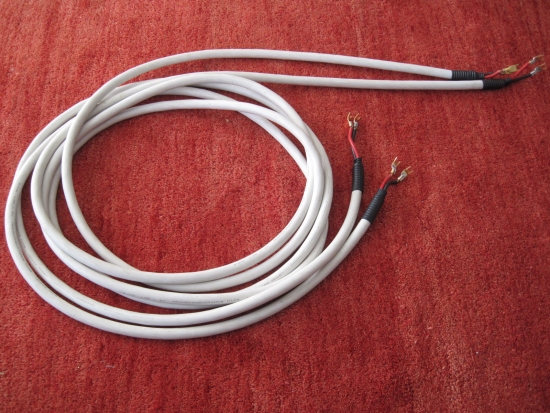 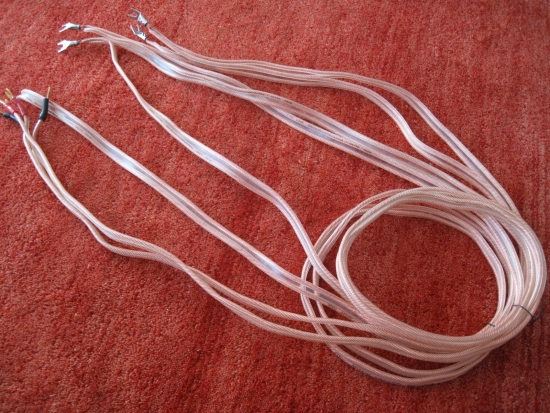 I actually don’t know a great deal about the history of these cables but what I do know is that the LS4X twin lead cable was used by magnetostatic speaker manufacturer Apogee Acoustics for their Diva model, between external crossover and speaker. The cable drew my attention when I read in an article that apparently the Diva wouldn’t sound very good, until it was hooked with the very same cable from amplifier to crossover box. The reviewer in the article was perplexed at how much difference this seemingly nondescript cable made.

Thing is: the LS4X may seem like an ordinary, albeit heavy gauge (large diameter), litze cable, but its construction is really rather complex.

Differences between LS4X and LS5 SX

The conductors are actually identical – the only difference is in the addition of some thick white PVC outer sleeving in the case of the LS5SX. The LS4X only has one layer of thin transparent PVC. Another difference is that the LS5 SX’s two conductors are placed closely together where the LS4X has them separated more. 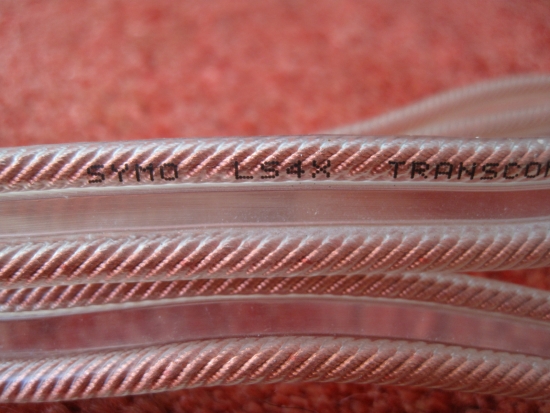 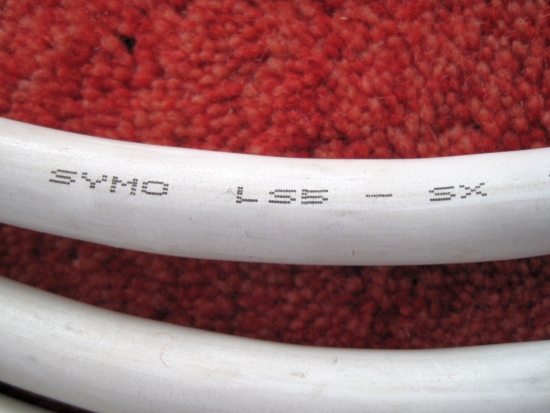 Both Symo cables consist of a mixture of solid core and litze wire. The core is made up of a few solid core wires (I forget how many, I believe 4), around which another 6 solid core wire are wound, but with a twist: around these outer solid core wires are very fine, individually coated, litze wires. The wind of the litze is very tight and almost perpendicular to the inner core. Therefore, the litze wire will have a far greater length than the inner wires. Perhaps this is something to do with the idea that high frequencies travel faster and have to be slowed down, or something. I’m just guessing here, but really the underlying theory doesn’t interest me that much, as long as the cables sound good. But do they? I’ll get to that in a minute. But first a word about termination. 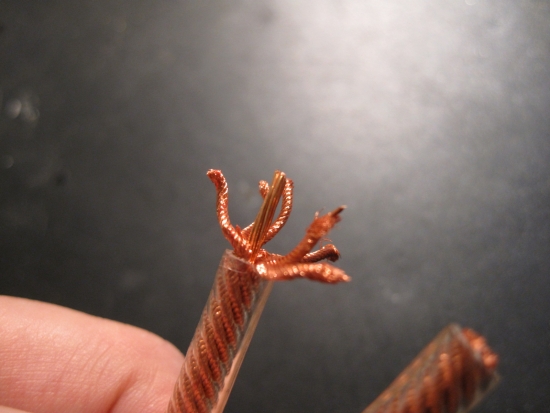 In standard form, the cables come with factory-fitted Monster spades that aren’t bad at all, it’s just that their small gap space only allows them to be connected to the original Apogee spade connection terminals, it seems. They won’t fit Cardas or WBT binding posts. 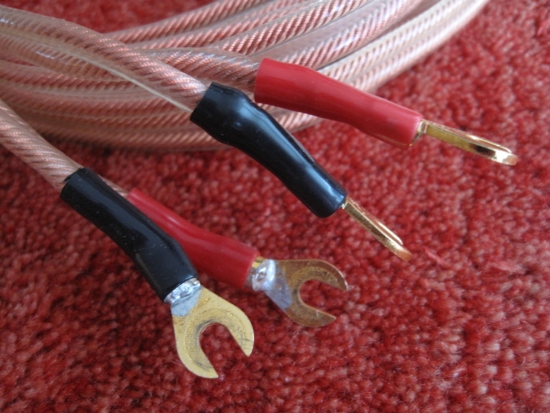 It is possible to solder connectors to bare cable ends but you first have to get the coating off the litze. If you don’t then you risk making a half-baked connection. What you need is either a proper soldering iron (40 watts at least), some S39 (soldering acid) and a lot of patience, or a more professional solder-pot. Of course I didn’t have a solder pot so I went with option one. But hey, it will work. 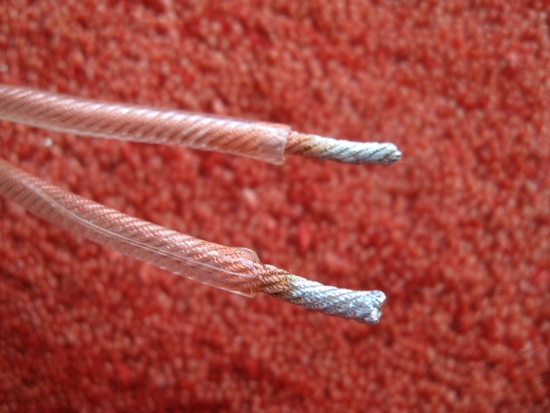 I’ve compared both Symo cables in my own set up as well as in JW’s setup. The comparisons were carried out versus Transparent Reference XL and van den Hul Skyline Hybrid. 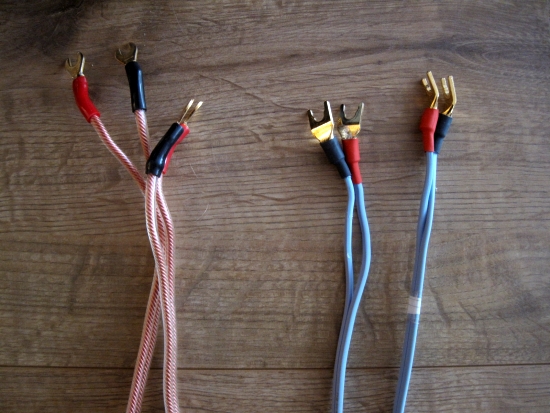 When used with the Diva, LS4X sounds fuller and more colourful than Skyline Hybrid, with a deeper, more sonorous bass. However, the van den Hul edges it with more airy treble and an overall more refined sound. Also, the LS4X doesn’t image very well, there’s more of an “overall” feeling, rather than pinpoint imaging. However, the LS4X sounds very lush and has wide and deep imaging, and it does indeed make for some mellowing of what with Apogees in a wrong setup could be a hard/edgy sound. In this case however the result was a more friendly sound with a lively, upbeat and “live” character but trailing behind a little in terms of low level detail. The Skyline Hybrid sounds just as upbeat and engaging but offers better resolution and greater overall transparency, albeit with less “meat on the bones” and with a much leaner bass. Which of these cables will eventually sound better in your system will be very much a matter of system synergy.

LS5 SX is another matter. Perhaps it was due to the badly soldered connectors (cold weld perhaps) or simply down to the two conductors being much too close to each other as well as being covered by two thick PVC layers, I can’t say. But the net result in my system at least is that the LS5 SX sounds dull, thick and slow. It’s got compressed dynamics, sounds dark and soundstaging is confined to the speakers. The sound doesn’t breathe. The only thing you could say that the LS5 SX has got going for it is that in comparison with the van den Hul Skyline Hybrid, it sounds fuller and more romantic. But that’s only a very partial success and on all other accounts it just doesn’t sound very good. 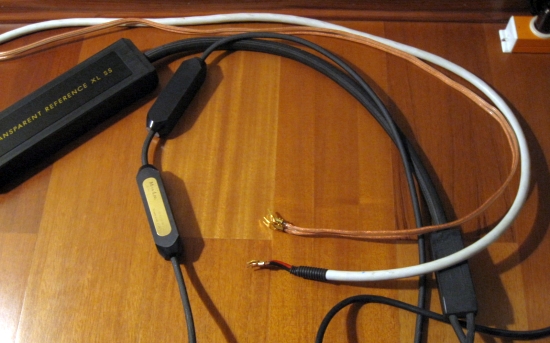 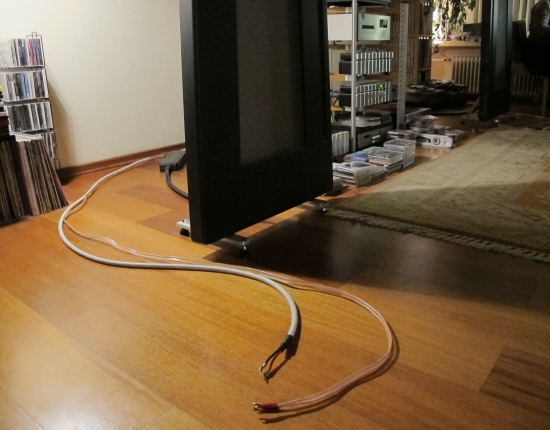 This section of the review was carried out in the system of my listening buddy JW. This is admittedly a very unfair comparison as the Transparent cost around 12.000 euro new, and around 4000 euro second hand, which is ridiculous money indeed. Still: in audio all is relative and it has to be said that the Transparent can be beaten in certain areas. van den Hul Skyline Hybrid for example sounds more airy and has a fresher, more upbeat feel while avoiding any harshness. However its soundstage is narrow, timbre is nowhere near as full as the Transparent’s and its bass obviously can’t touch the Transparent’s.

The Symo LS4X surprisingly actually comes closer to the Transparent XL in certain aspects: it has the same overall sonic signature in terms of luxurious richness and fulness. And incredibly the Symo actually beats the Transparent in outright midrange- and upper bass slam, sounding more “live”. But of course the Transparent in turn beats the Symo again in soundstage imaging and -layering. The Transparent is simply master in that department, as well as in deep bass. Then there’s the matter of microdetail: while the vdH is still impressively detailed, the Symo clearly stays behind, painting a broader picture. Importantly, the LS4X does sound immediately emotionally convincing.

The Symo LX5 SX again disappoints, managing to sound dull and agressive at the same time. In all fairness, part of this I think is due to the badly soldered connectors but the dullness itself I fear is down to its design, using lots of PVC. But I can’t be sure until I replace the connectors myself and unfortunately, that I cannot do, as it is a loaner cable. So please take the LS5 SX comments with a grain of salt. 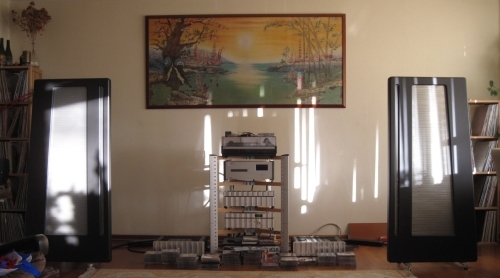 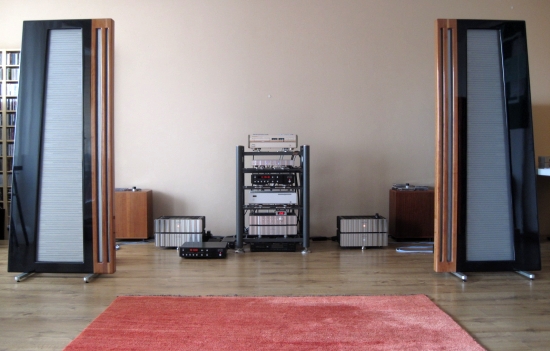 Moving back to my own system, the Reference (with XL technology), the cable I use myself, clearly sounds more lively and upbeat than the Reference XL SS. The latter however is smoother and more luxurious and forgiving and works well in JW’s system, but sounds too relaxed for my system. While the LS4X sounded particularly more “live” than the Transparent Reference XL SS in JW’s system, in my system the Transparent Reference (with XL technology) overall sounds just as lively. And this time, the LS4X doesn’t offer any improvements over my own cable. Still: good score for the Symo LS4X, for coming so close to the much more expensive Transparent cable.

Symo LS4X is a very nice cable with a similar tonal character as Transparent Reference XL SS and Transparent Reference (with XL technology. While more upbeat and “live” than the Reference SL SS, the more lively Reference (with XL technology) compensates for this and levels the field in the dynamics department. Either Transparent cable has better deep bass, soundstaging and layering than the Symo. But, this comes at a price. I’d say if you’re looking for an excellent cable that approaches the Transparent sound for very little secondhand money, the Symo LS4X is a great choice. Don’t however expect the Symo to open up new worlds in the detail department, it won’t. But it does indeed match very well with Apogees, making them sound fuller, friendlier and smoother.

van den Hul Skyline Hyrbrid is simply a steal at its super-low price of 7 euro per meter. It offers well-paced sound with excellent dynamics and open, fluid treble without sharp edges and it really only loses out in soundstage width and depth, (bass-) fulness and tonal colour.

Transparent remains my brand of choice but I have to state clearly that they are not universally applicable cables. Oftentimes you have to take countermeasures elsewhere in your system for Transparent to work well. Symo in that respect is much more of a universal cable.