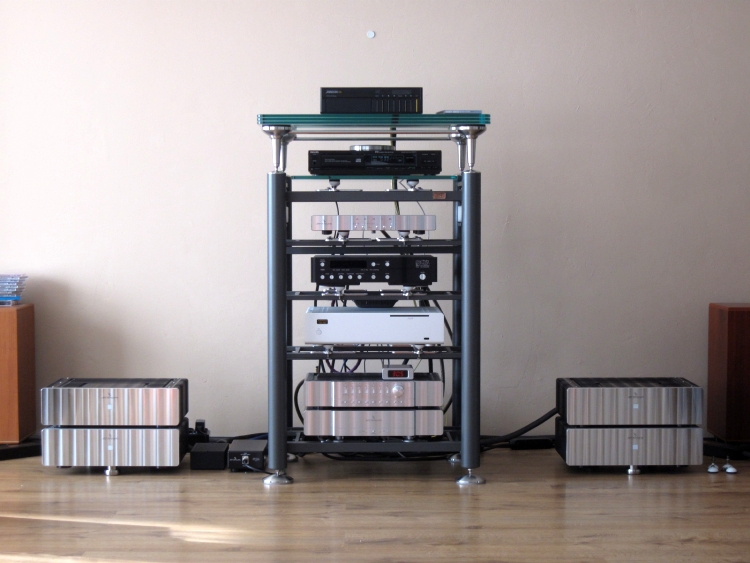 The most stunning audio rack I have ever seen, and my new reference

There are only a handful of brands that make ultra high-end audioracks. There’s Harmonic Resolution Systems (HRS), Copulare, Finite Elemente, Grand Prix and Symposium. And then there’s Artesania. The latter is something special. It is a rack with a classical appearance that hides its high-tech nature in plain sight. I had never seen one in person but the photos looked so very promising and the idea behind it so interesting that I became massively intrigued. 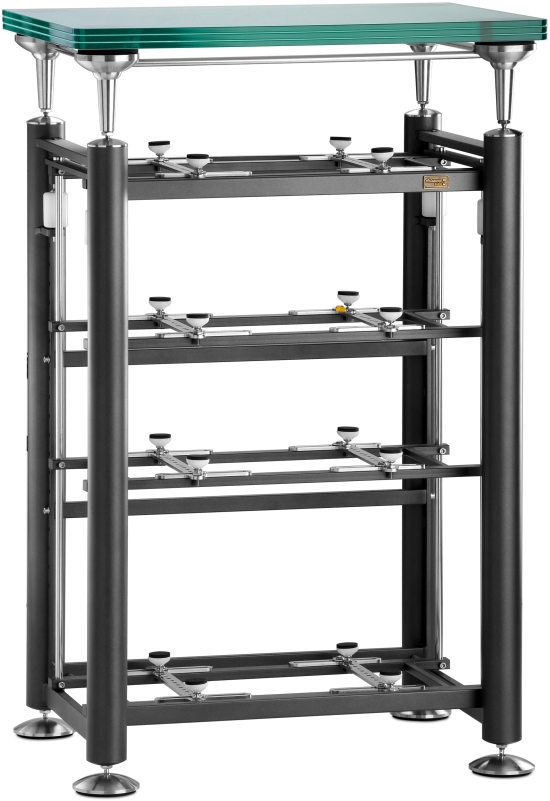 Over the coarse of the last 10 years I have heard and compared various audioracks and have always found the Finite Element Spider to be the clear winner in terms of neutrality, unrestricted dynamics, low level resolution and lack of coloration. And of course the modular system is ideal for persons who often change their system configuration. Sonically there wasn’t much that the Spider detracted: a slightly thinner sound was its only vice. Still, as my system evolved I have been entertaining the idea of moving to a more upscale audiorack for quite some time.

Now that my system was almost exclusively silver-colored, my aim was to get a more classical, dark-colored rack. The Spider was just getting a bit too Fischer-Price and too aluminum-esque for me after all these years. Also: the modular nature of the rack, although fabulous in idea, also meant that elements bought over time were never 100% fitting. I would always struggle to get all pillars exactly level. I’m a perfectionist that way.

But the new rack would have to be at least as good sonically and as versatile as the Spider. After all: my setup changes a lot and a rack with fixed shelves wouldn’t work. Quite soon I stumbled on the world’s most esoteric racks but was baffled at their prices. PARTicular, Harmonic Resolution Systems, Rethm and finally Artesania. The latter really took my fancy! Viewed from a distance it seems as simple as a regular rack but from the sides and upon close inspection its high-tech nature is revealed. The Artesania Esoteric rack is basically a frame suspended from the top within another frame. Theoretically this would mean that the bottom level should sound as good as the top level, or maybe, even better. What’s even better is that there are no shelves but only frames with integrated feet to rest the component’s belly’s on, much like with Spider. But this time the levels are infinitely adjustable in height.

Even though a Spider isn’t exactly cheap, I think that its quality more than justifies its price. And after having compared it to various other racks I just accepted that quality has its price. Recently, the idea of spending a lot more than Spider’s entry price on a rack was starting to sound ever more reasonable. Non-audiophiles may struggle to understand that spending many thousands on a piece of audio furniture can seem like a good investment to anyone but it is quite simply just a gradual process. While getting better and better equipment at ever steeper prices, one get accustomed to the principle. So it became to be that I was ready for a super-high end rack. Surely it wouldn’t be out of place as long as it costs less than any one component that it housed? I took the plunge and ordered an Artesania Exoteryc audiorack. 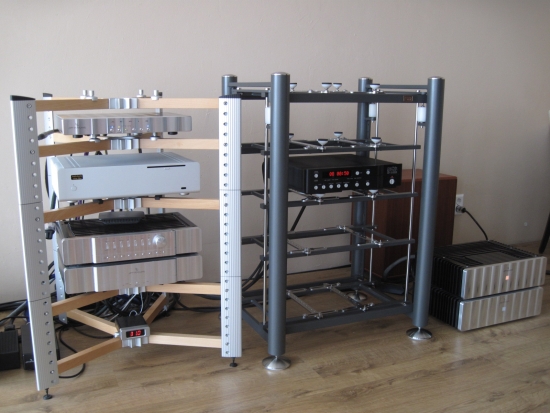 Above: Spider rack and Artesania rack side by side test setup, enabling comfortable one on one comparisons

While searching the internet, I found two different spellings for the name of the rack: Esoteric and Exoteryc. It made me wonder which was correct. I asked mr Cayetano Castellano who handles international press matters for mr Jose Luis Lafarga, the designer of the rack. The reason is simple: originally the rack was called Esoteric but because a Japanese company had registered this as a brand name, Artesania changed the name to Exoteryc. 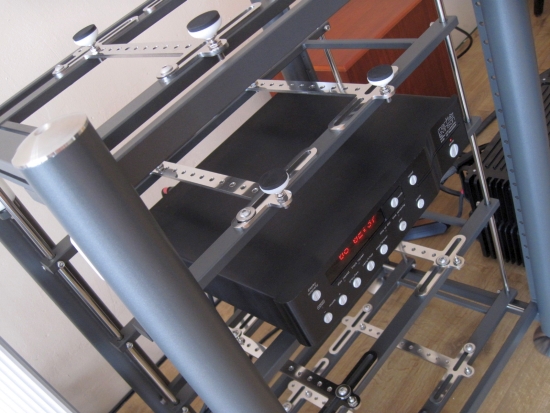 Above: The Mark Levinson no. 390S CD player is the first component to test-drive the rack

The Artesania Exoteryc has a very special trick up its sleeve that upon first inspection might not be immediately obvious: it is essentially a rack suspended within another rack, the inner rack being thin and elegant and the outer being solid and heavy. On the detailed photos it is clear to see how this works: four polyamide dampers are screwed to extensions of the four big pillars with a neoprene ring sandwiched tightly in between. The inner rack in turn rests its spikes on top of the polyamide dampers. The whole is surprisingly sturdy: there’s no wiggle, even without optimally aligning the anti-pendular movement screws in the bottom. By the way: the rack is not only super-solid but also acoustically dead: there’s absolutely no ringing anywhere, which goes a long way explaining its weight of more than 60KG (132 Pounds)! 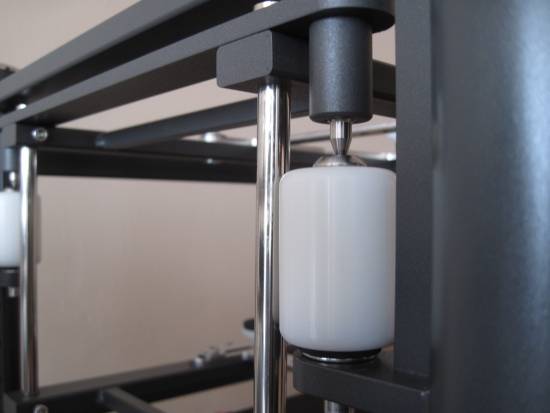 Within the suspended rack, there are normally 3 levels (60cm version) or 4 levels (90cm version) equipment levels, all infinitely adjustable. For my rack I have ordered on extra level so that all my sources can be housed within the rack, with the top position left vacant for reviewing purposes. The total weight that the suspended cage can carry is 150KG which is more than enough even for me and my heavy Jeff Rowland equipment. If you have a turntable you can also order an optional thick sandwiched glass top level. Besides the 60cm and 90 cm single racks there’s also a Tandem version. 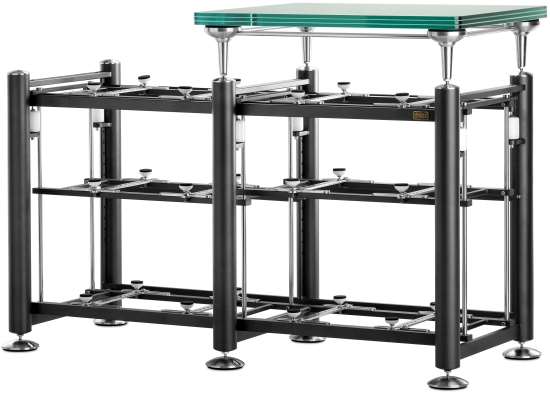 Each level has two beautifully polished stainless steel bars with pre-drilled thread in them which allow a great deal of flexibility of feet placement in the lateral plane. The two bars are in turn freely positionable in the horizontal plane and can be fixed with two big screws when the perfect position is found. 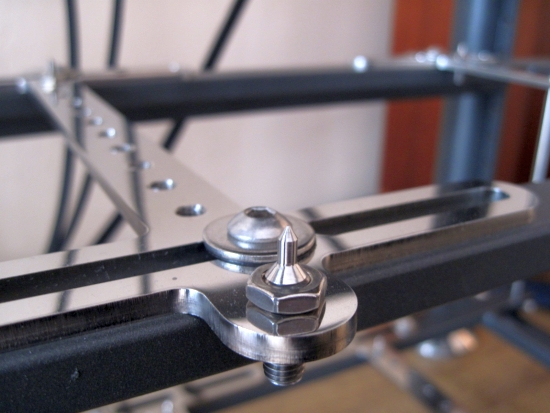 The white component feet are placed on top of 4 sharp steel spikes and sit snugly thanks to a soft plastic insert. They work comparable to Finite Elemente Ceraballs that way. The feet themselves come in two flavors: with velvet top layer and with neoprene top layer. The manual states that the velvet ones can be used in circumstances where the listening room is well-treated and some over-damping can take place if the neoprene pads are used. I found the opposite to be true with the velvet ones sounding more “filtered”, softer and lacking some bass articulation compared to the neoprene ones. 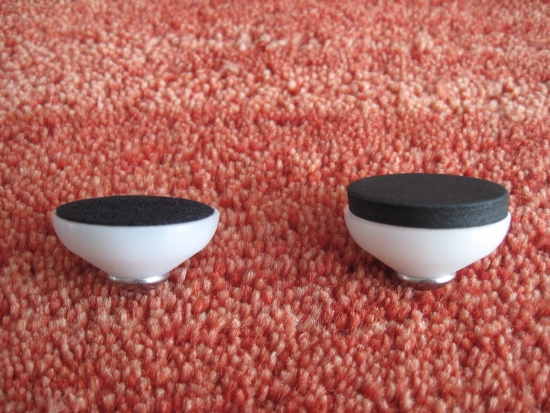 Additionally there are also two sets of pads for under the rack’s feet: black neoprene ones and white polyamide ones. I understand from the manual that the white ones are default while the black neoprene ones are to be used in situations where the listening room is under-damped (very lively). For this one I didn’t experiment and chose the harder wite ones for their suspected better articulation. After all, my system had been tuned using a Spider rack: racks do not get any more direct-coupled than that. 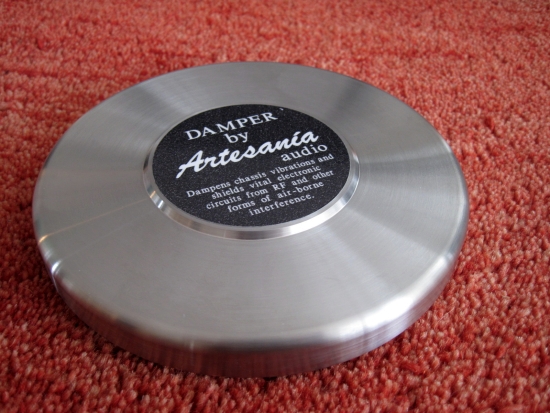 Also included are heavy dampers (15cm diagonally) for placement on top of the components. They are covered with soft neoprene on the bottom so that they will never damage the equipment that they sit on.

All feet are individually adjustable. In fact: the entire rack is so easily adjustable in so many ways that it is simply a joy to use. 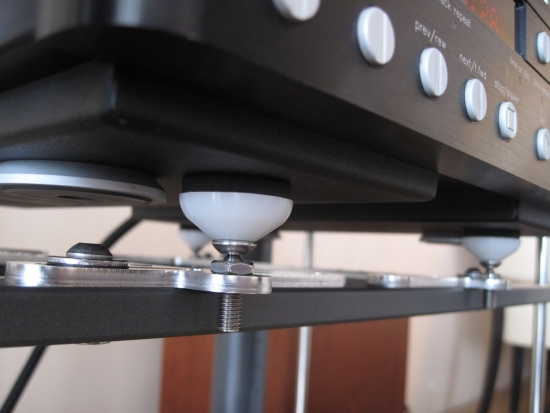 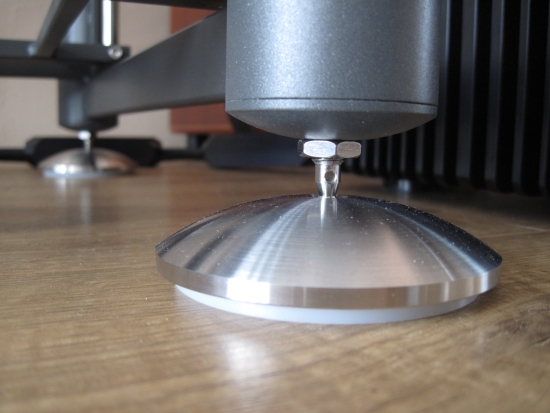 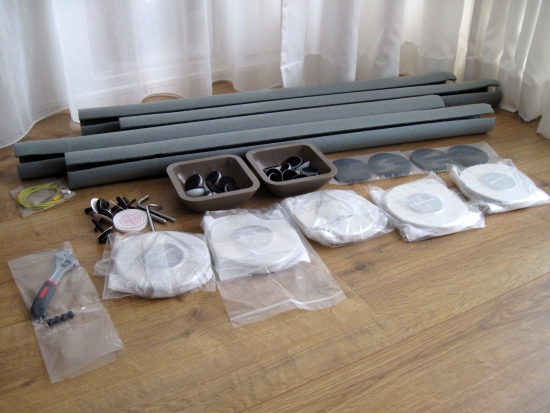 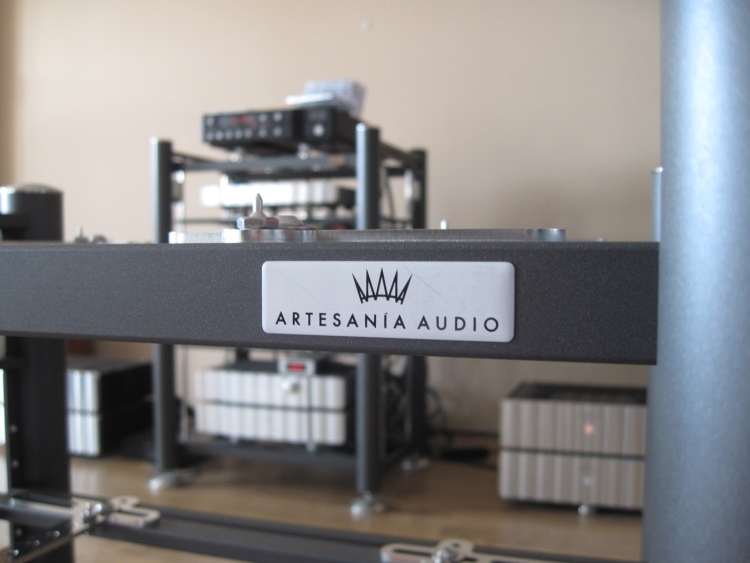 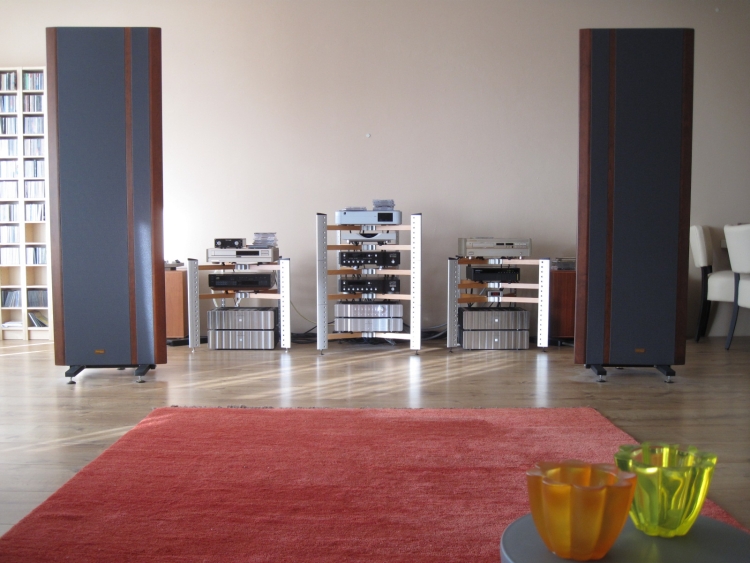 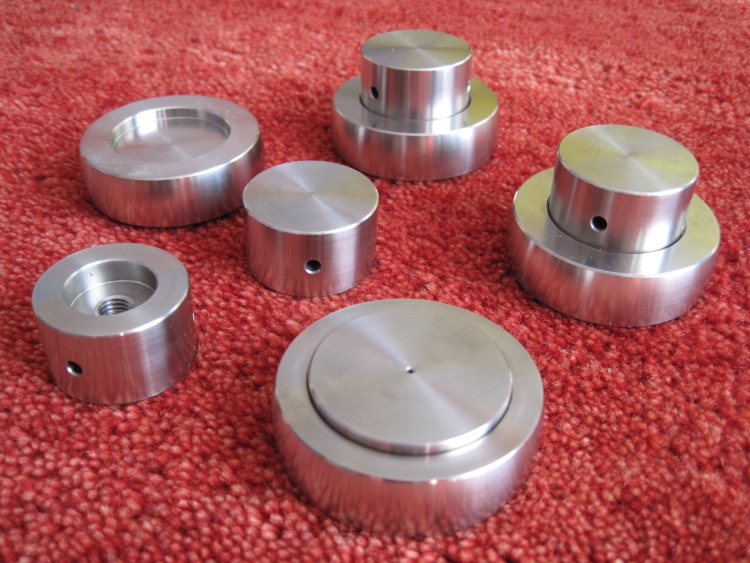 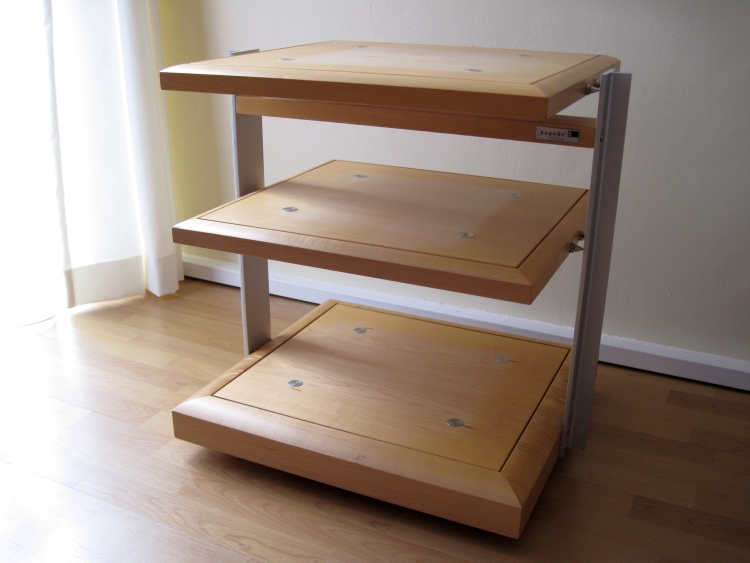