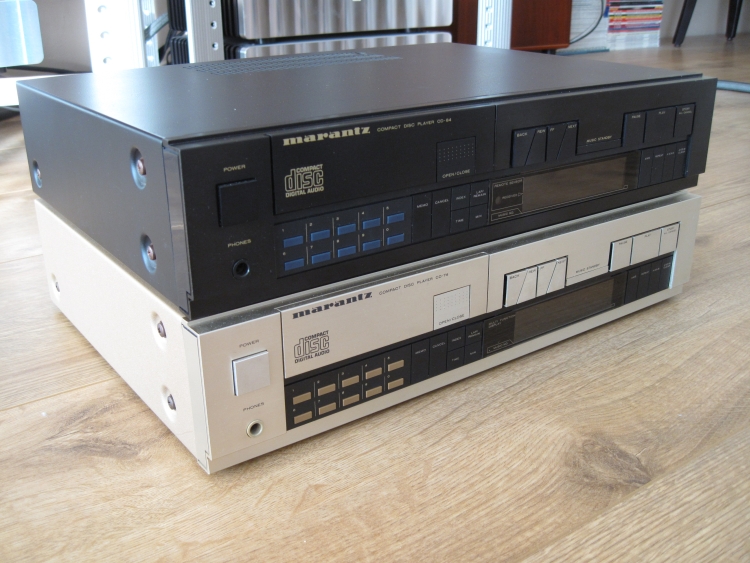 Here’s a closer look at these two identical-looking players who turn out to have entirely different sound characteristics. You’d think that this is down to the transports being more or less worn and in fact this is what I thought too. What’s more: the CD74 has some hickups every now and then where the transport hangs for a few seconds and then resumes playback. To determine what causes this, as well as out of pure curiousity, I did some board-swapping with very interesting results. 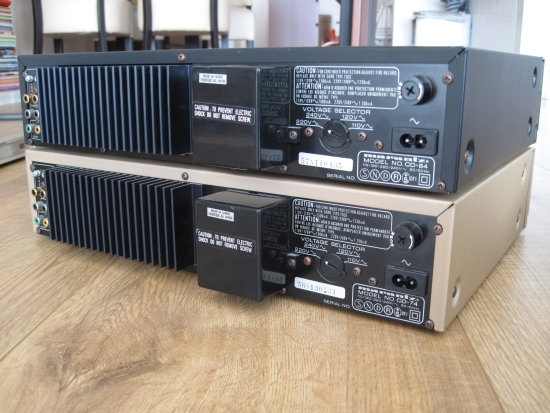 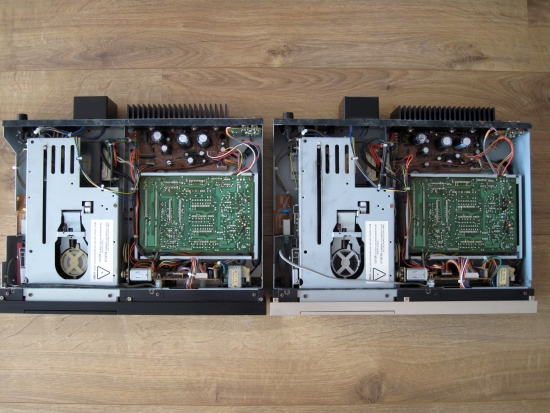 So far they look like identical twins, right? But under closer scrutiny, some differences can be found… btw: both transports are the CDM1, which, supposedly was not sourced in Belgium, but made by Marantz themselves. 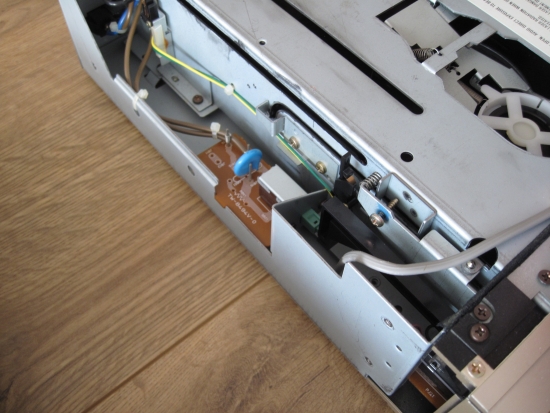 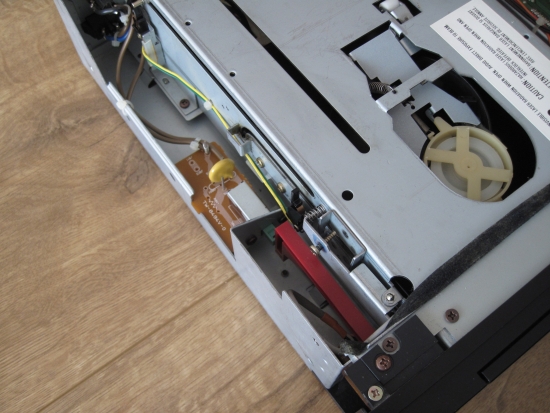 Red plastic power bar, yellow capacitor and white plastic cd clamp for the CD84. Mkay, boring, I hear you murmle? Let’s move on to the more interesting part, then. 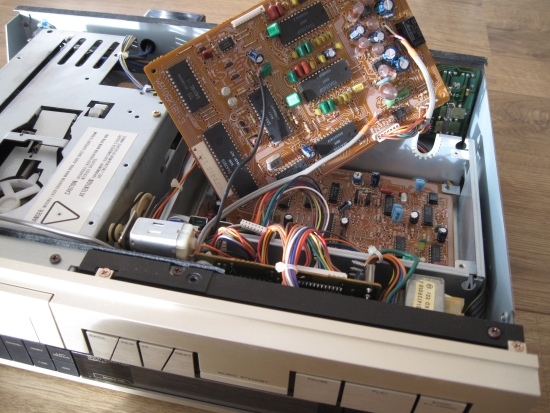 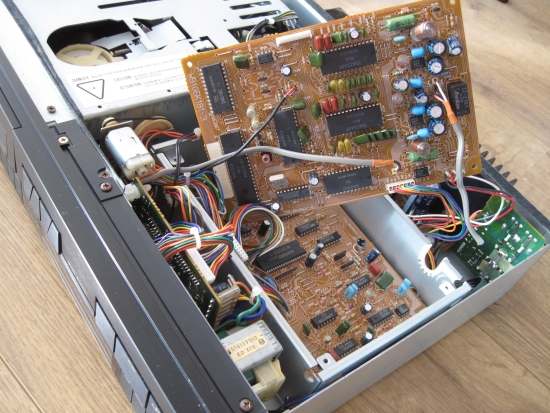 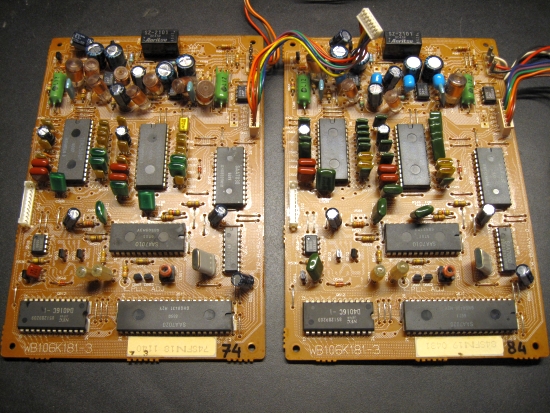 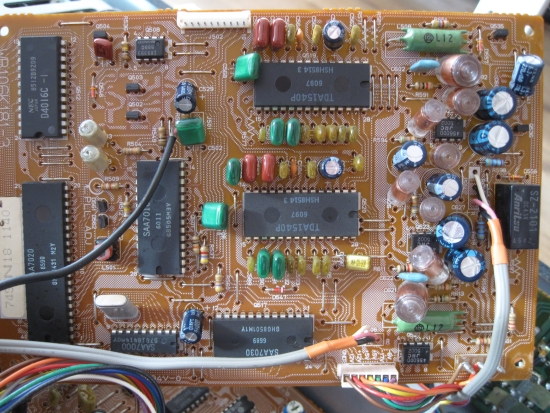 CD74 DAC board – concentrate on the capacitors around the dacs and aligned vertically on the right hand side. 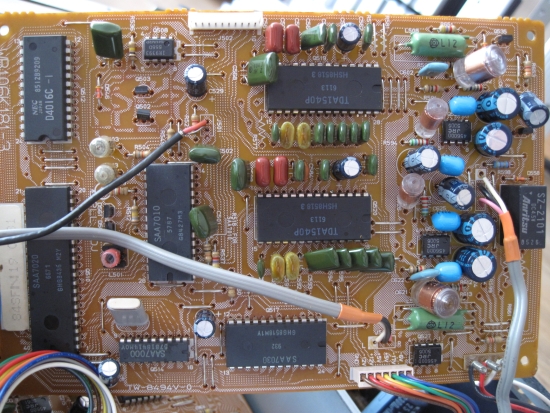 CD84 DAC board – notice that the CD84 has more, and more luxurious-looking capacitors? Now, I don’t know an awful lot about electronics at this level, and I can’t read the values on them but I think it’s pretty safe to say that the CD84 has more/beefier/more expensive capacitors than the CD74. Would this explain the large audible differences I heard? Before I go there, there’s one more area in which the players differ clearly, but again the difference is deceptively small… 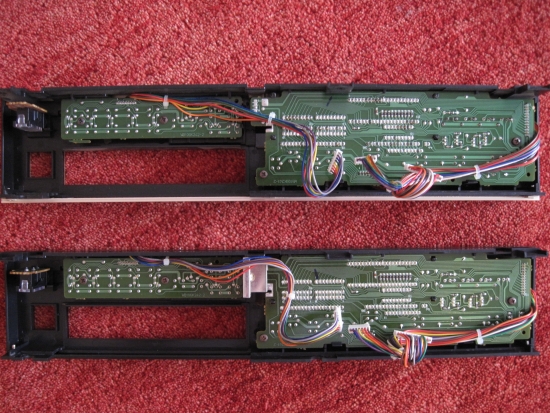 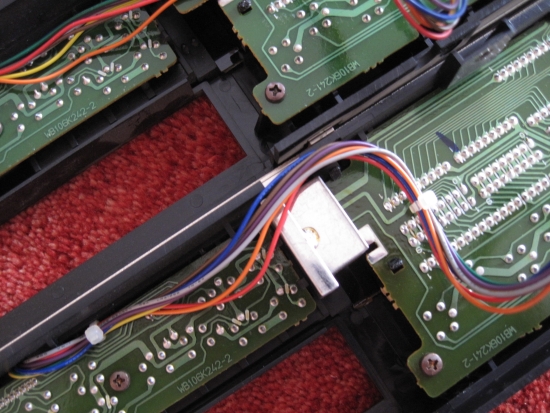 These are the front panels of both players. See how there’s ab-so-lutely no difference between the two, except for the lack of an IR receiver for the CD74? All electronics are already in place, only the plastic window doesn’t have a peaking hole for the IR signals to pass through. Look at the part numbers on the circuit boards… yes, they’re identical.

So, I mentioned someting about large audible differences and interesting board-swapping… and indeed there’s an interesting story to tell. For starters, my CD74 has some playback problems where it will hang for a few seconds while the counter also stops, after which it usually resumes playback. I figured that this would have to be a problem with the transport. In an effort to fix this, I inspected the transport very closely and tweaked all potentiometers, carefully marking their initial positions. No luck. Then, after I had bought a CD84 (with IR remote, hurray!) I was disappointed with its sound. Where the CD74 sounded a little coarse but highly lively, upbeat and dynamic, the CD84 sounded much smoother but also sounded slow, thick unexciting and a little too polished. But it played flawlessly. You could tell that this player has had low use as it was in impeccably shape.

So, in an effort to keep the CD74 sound while curing the playback problems, I swapped the DAC boards between the players. Now the CD74 DAC board was in the CD84 and I was expecting CD74 sound without stuttering and with IR remote capabitlity. Sure enough, the remote worked but the sound… it was’t the best of both worlds. Quite the opposite: now it was actually a mixture of both players’ downsides! The CD84 lost some smoothness and gained some coarseness, but it was still slow, thick and sleepy. Then something unexpected happened: the CD84 halted playback and hung in exactly the same manner as the CD74 had done before. Remember: I had only swapped DAC boards, the transport inside the CD84 was still the same. So, I had actually moved the playback problem from one player to the other, without touching the transport itself, or even its servo board.

Recalling which cables I had to disconnect and reconnect – analog out, headphones, power – and indeed one coaxial cable. This one may well be a clock connection between dac and transport. What can be learned? All differences I have heard between all old Philipses and Marantzes thus far, every incident where one player sounded slower, sleepier, less lively than another close cousin, or when a players has playback trouble like described above, this needn’t neccesarily be because the transport had been worn out. There are quite clearly other factors at work too.

Ahhh, the foggy, mysterious world of audio. You got to love it.

Response from Stefan, a regular reader

I just had a look at your Marantz CD74 vs. CD84 comparison. These are interesting findings about the difference in sound between one player and the other. And while I think part of the difference is down to wear, there are obvious differences in component quality as well.

Concluding from your pictures, the CD74 uses metalised polyester caps (the brownish ones) around the DACs while the CD84 uses a mixture of metalised polyester caps and metalised polypropylene caps (the green ones) for the same appliance. Interestingly, the caps around the OPAs are of better quality with the CD74 – polystyrene film caps throughout while the CD84 uses metalised polystyrene caps (the blue ones) in some places. As I haven’t worked on a CD74/84 myself, these findings are from my experiences with various CD204/304 and CD94/960 and the MKII versions which seem to use the same caps.

But please don’t work on the potentiometers without measuring equipment – turning the one for the laser current too far up can completely damage the drive! There is some good advice on the following page:

It is in german, but quite easy to understand. Especially the relevant part about the CDM service.

Stefan also contributed quite a few CDM pictures as well as some great advice, so thanks Stefan! 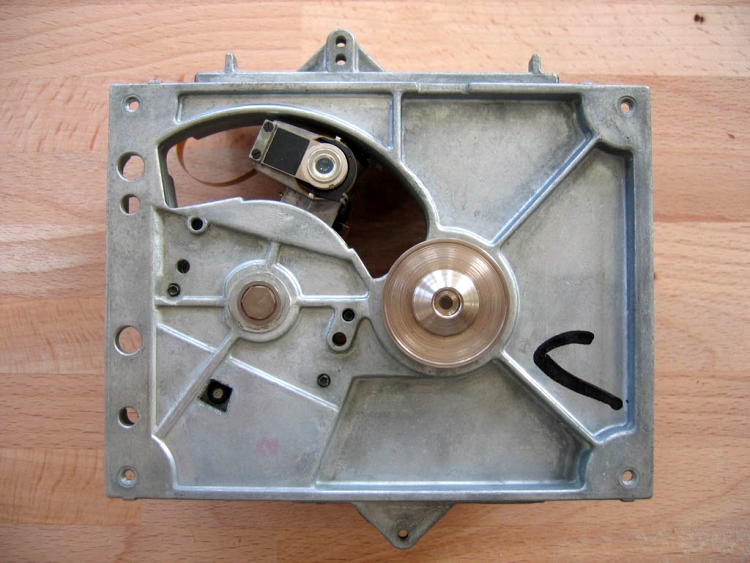 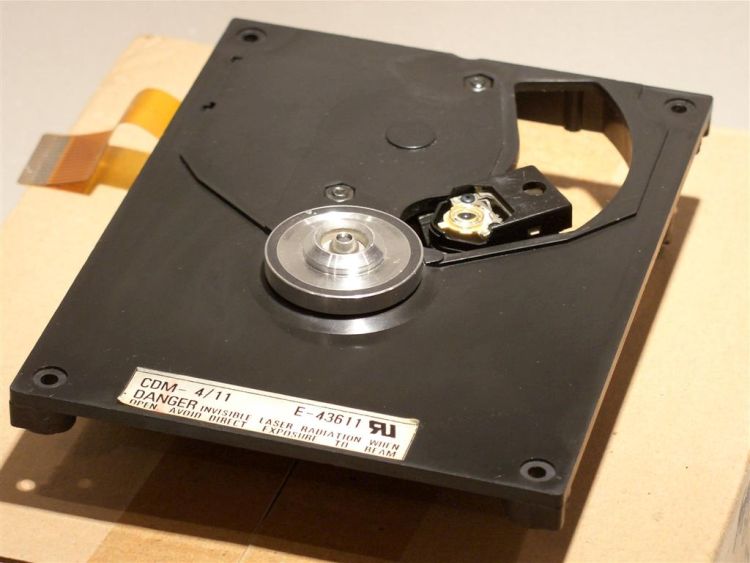 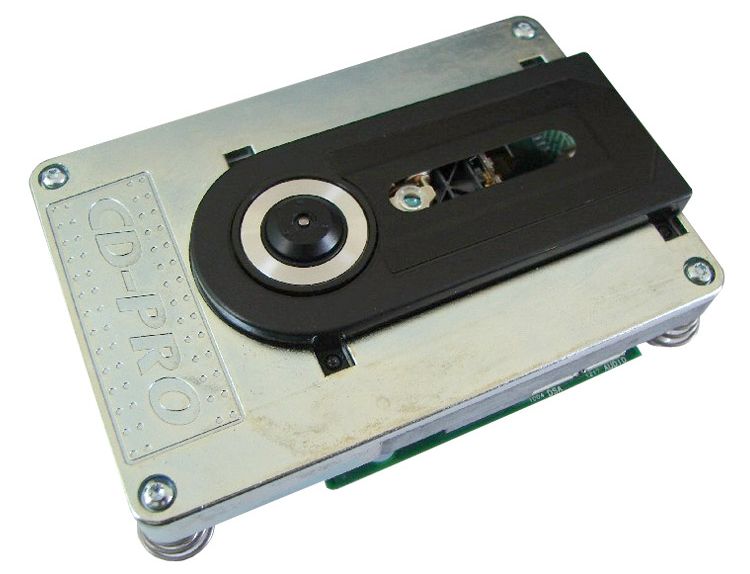 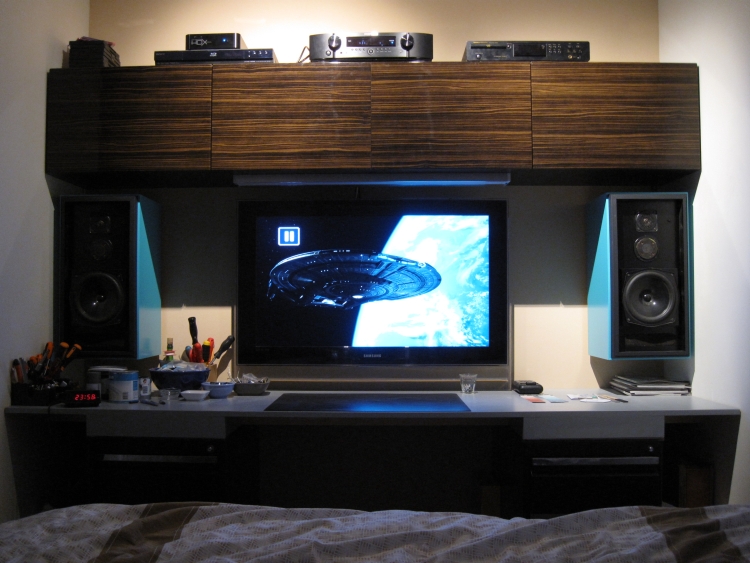 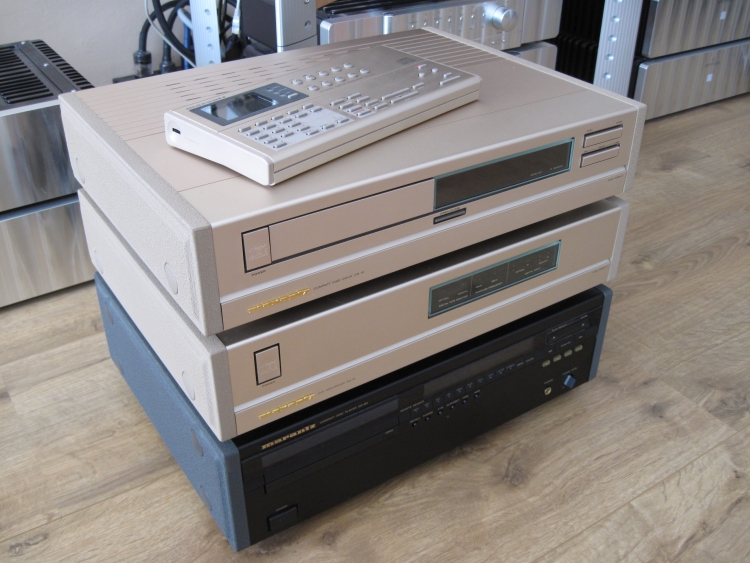 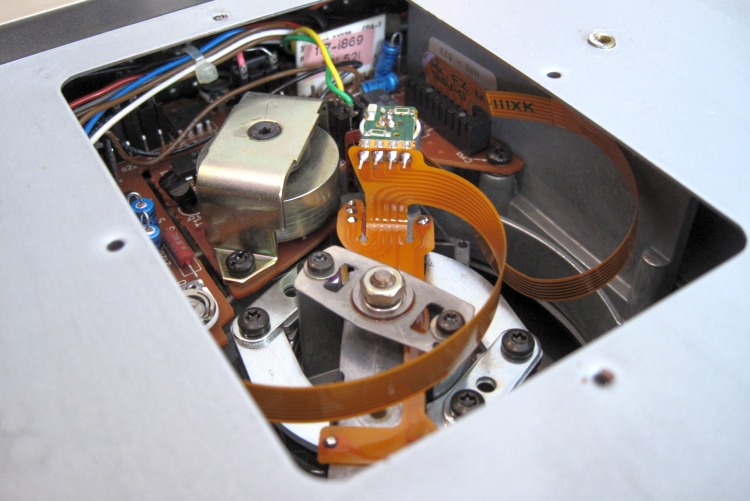 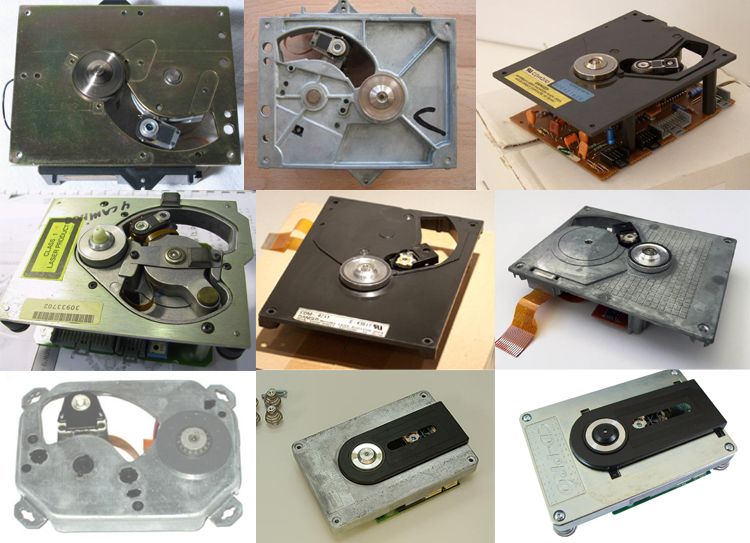 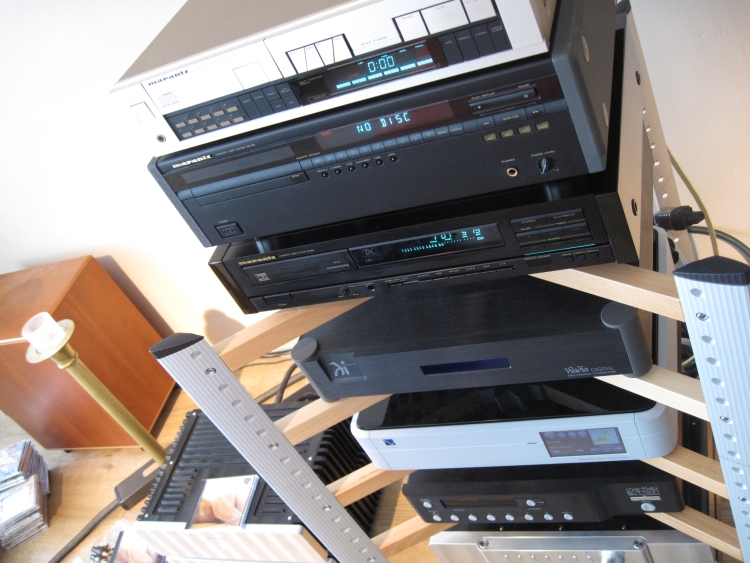