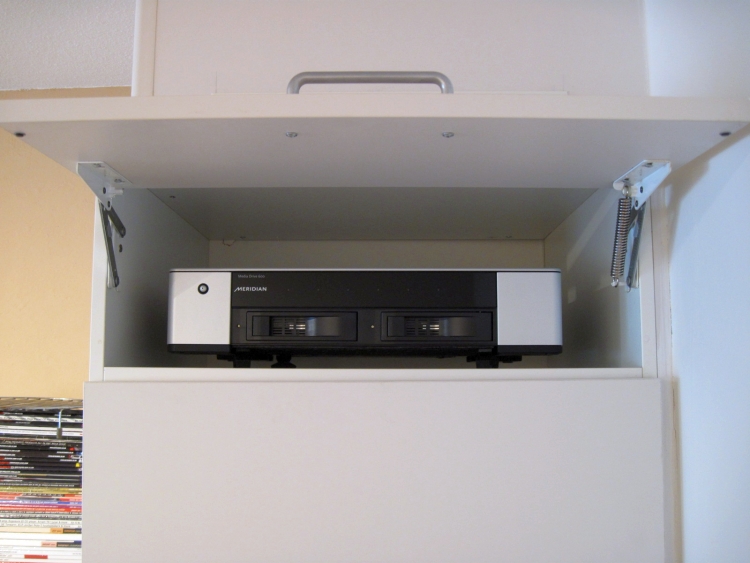 After having removed my auxiliary audio racks I had no more room for the Meridian MD600 server. The easy solution would be to stack it away somewhere, after all, it’s just a music server and it doesn’t care where it sits, right? Alas, wrong!

Because this Sooloos disk storage unit emits strong resonances, is sensitive to placement and also responds badly to extra switches in the network path, I cannot simply install it in the consumer unit box or anywhere else. Naturally, due to its noisy nature, I first tried it installed in a separate room, away from the listening room. Alas, that won’t work, as became clear very quickly during some tests in which the signal was routed over very long cable via several switches. It mattered to the sound which power cable was used, what the MD600 sat on and what cables (and switches) the signal ran over. What remains is to use a very long UTP cable without the introduction of extra switches. 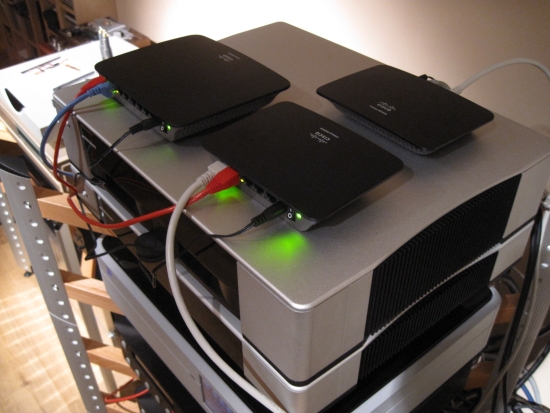 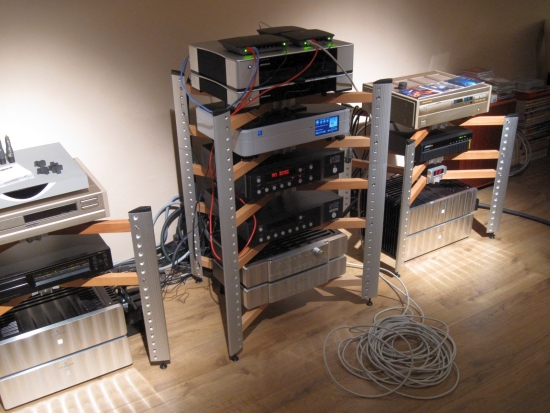 I even tried the MD600 setup in its ideal position, on top of the MS600 and with a good power cable connected to the same outlet as the rest of the system, but with the networking section running over various UTP cables and various switches. The degradation in sound quality was staggering! For best sound, the MD600 needs to be connected to the same switch as the streaming endpoint and because of its resonant character, placing it on a non-resonant rack such as a Finite Elemente Spider makes for the most silent operation but the main rack doesn’t offer enough space to put it in. What remains is to use a very long UTP cable without the introduction of extra switches.

I found an interesting piece of info by a Roon employee on the Roon forum:

“Meridian Audio discovered that RF, picked up by the Ethernet cable, could get into its product (ID40 card) and was unambiguously audible. In fact, they heard the difference first and it took them ages to realize that the audio quality improved when the Ethernet cable was removed. They then worked around the problem, initially in the Anniversary 808 by using RF suppressors on the cables, and subsequently with the development of the ID41 card which has much better E/M isolation”.

So far the quote from the Roon forum, I’ll rest my case by adding that the audio signal itself could well be impervious to cable and switch influences, but that other mechanisms can still be at play that accounts for the perceived differences in sound in ways that are not immediately evident. We like to think that we have mapped all there is to know on this matter but to some extent, we are always expanding our knowledge.

So, what I tried was to set up the MD600 inside a cabinet in the kitchen, as can be seen in the topmost picture. There were no extra switches, only a longer cable of a different brand than the one used when the MD600 was sitting in the Spider rack. Guess what? The sound was terrible. Somehow, the boxiness of the cabinet worked its way into the MD600 and the signal that it outputs. Not only that, the vibration was now amplified so much that it was audible through the entire listening room and even in the hallway. Clearly, this was no good solution. To make sure that I wasn’t hearing things, I reinstalled the MD600 in its original place and substituted only the short UTP cable for the longer one that I used for the test in the kitchen. Believe it or not, but the difference was clearly audible, the one cable sounding mellow and laid back and the other more precise and articulate, but also more forward and less fluid. 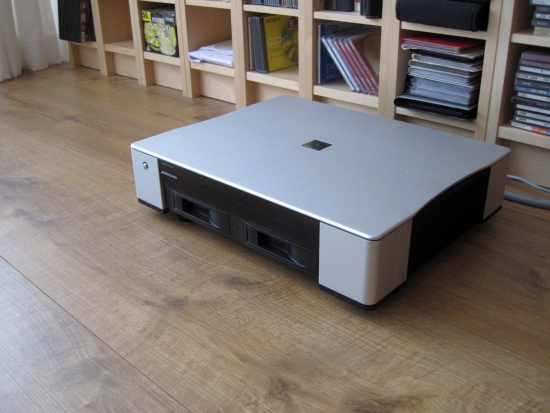 The MD600 sounds fine on the floor, but you need to take special care with separate feet, in order to minimize the vibrations coming from the hard drives. Its bottom is very thin and flexible and you can really influence the humming by carefully and strategically placing soft rubber feet. I used Spider rack feet. Also, I applied self-adhesive damping material to the bottom, and carefully adjusted the disks to not touch any of the surroundings. They are on soft rubber suspension, but the drawers are hard-coupled to the drive carriage and they almost touch the front panel in places. Lastly, because the disk drives aren’t the only items causing hum, I have inserted a resistor in the fan’s power supply to make it run slower. Without this, the fan produces a very loud hum that even masks the noise that the two disks make. Of course, I kept a careful eye on the temperature inside but it turned out to be fine. All that was left now was to find an appropriate place to put it. 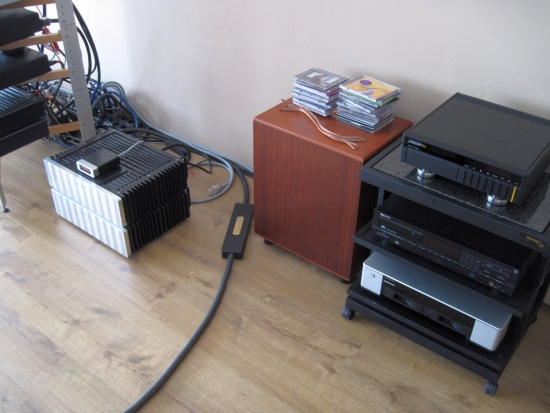 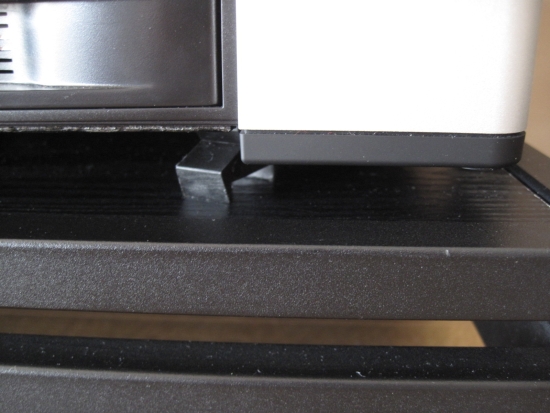 Eventually, I decided on bringing an old rack back from the storage: a simple Target rack, with plastic-veneered fibreboard in a ringy, hollow steel construction. For some reason, this rack sounds very neutral and its ringy nature (if you tick on it) doesn’t carry through in the audible signal. What’s more: because its shelves sit on soft rubber pads, the MD600 sounds as silent in the rack as it does on the floor. The subwoofer right next to it doesn’t really sit well with me, but it doesn’t seem to have an obvious bad influence on the sound, so for the time being, this was the MD600’s final position. 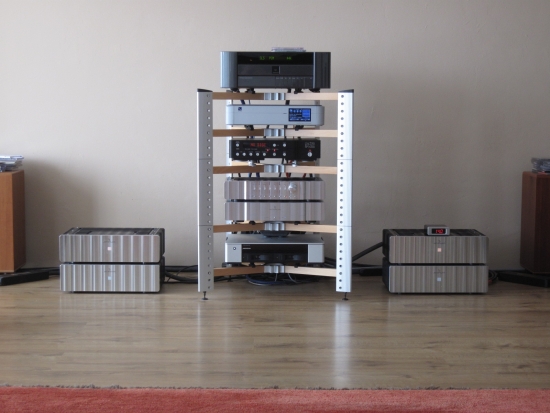 But I wasn’t entirely happy having the MD600 sit right next to the subwoofer. After I sold the Levinson DAC, there was free space in the Spider rack, and the MD600 moved there. Would you believe me if I said that the sound changed? A lot? Setup on the Spider’s bottom level, the bass was much more powerful, mids had more attack and sadly for me, the treble was also a little drier. But overall this was technically a better presentation, so I pulled out the tweaks in an effort to soften the sound ever so slightly again. 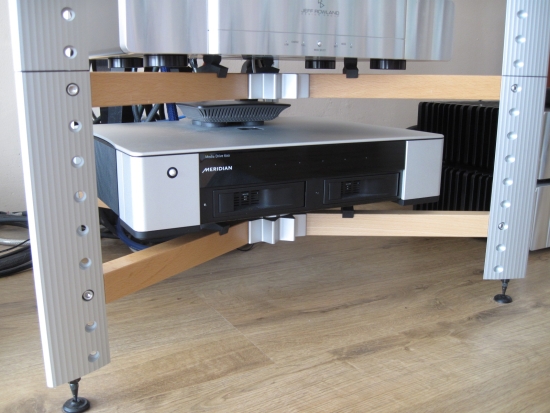 In addition to the regular rubber Spider feet, I added soft silicone pads under the MD600, swapped the Ceraballs under the 818 for regular rubber Spider feet and experimented again with network cables. I know many people don’t believe this but it is really true. In my experience, shielded cables (STP) sound more forward and unshielded (UTP) ones sound more relaxed. I use no-name brand cables or Belkin. As can be read in a popular hi-fi magazine, the best cheap UTP cable is supposed to be the Belkin Gold series and although I have one in use and like it indeed, it seems that they aren’t available anymore. 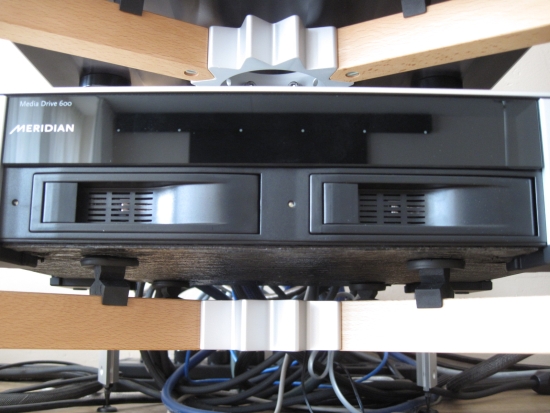 As can be seen on the picture: I covered the MD600’s bottom with automotive silencing pads. This helps keep the hum down that is caused by the hard drives. On the inside is also some of the stuff. Finally, I placed a resistor in the fan’s powerline, to make it run at half speed. I made sure that the unit doesn’t overheat. Even in my pretty warm living room, the processor and drives never become more than very hot. There is still very good airflow, but I do wonder why Meridian didn’t fit a 12cm fan in the bottom. That would’ve been so much quieter.

I think I now have a handle on why the sound worsened with every switch that was added: it’s not a degradation of the stream itself (which should not be possible) but probably an effect of power supply noise that finds its way into susceptible sections of the Meridian components or even other components in the system connected to them. 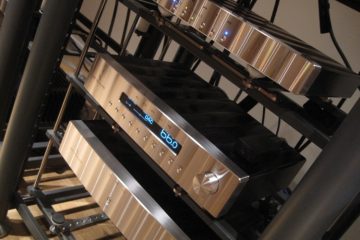 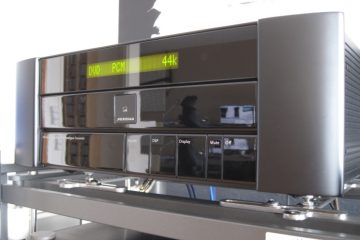 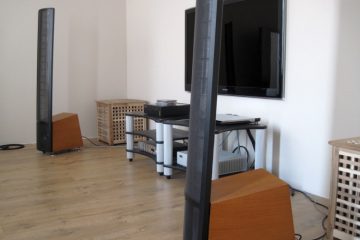 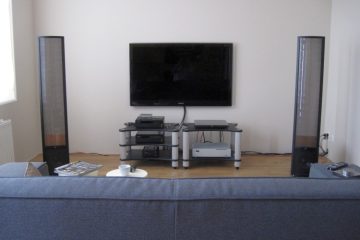 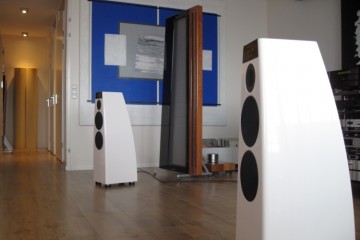 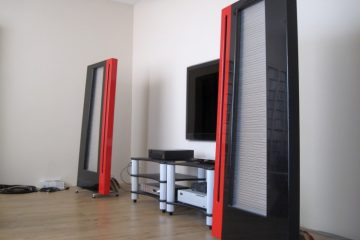 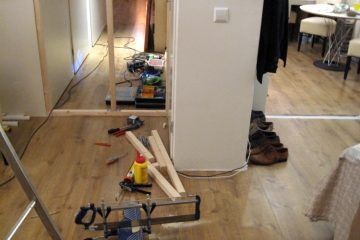 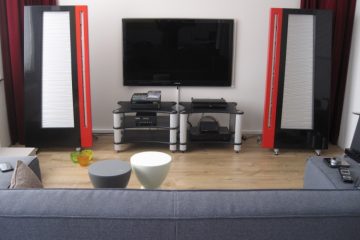 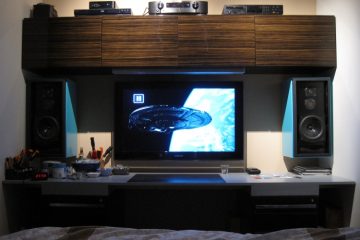 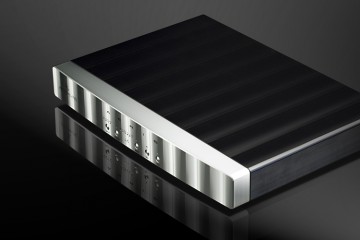 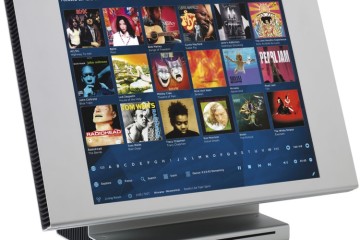