From earlier experiences with Lejonklou products, I know that Fredrik Lejonklou does not rest before he has found the ideal combination of electronic components to achieve a delivery that he finds both captivating and emotionally appealing. In this light, the brand-new Entity MC phono stage is pretty special as it is directly derived from the costly, built-to-order, SINGularity double mono MC phono stage. There is a nice text by Fredrik on the Lejonklou website that perfectly describes the process which I will shamelessly copy and reprint below, just shortened a little.

It all started in 2011 when an idea about an ultra-linear and very high gain input stage took shape in my head. The first prototype was built the same year and sounded very promising, but it was difficult to tune it to absolute stability. In retrospect, I realize that I didn’t know enough about high-frequency tuning and the components weren’t measured and selected to the required precision.

Five years later I had finally tamed the input circuit. The project now showed such promise that I went crazy and set my goal at perfection. With the help of measuring and selecting every component involved into groups with extremely small tolerances, machining the cases out of solid annealed billets of pure copper, dividing the stereo circuit into two completely isolated channels, designing a whole new power filter section and dual-stage regulation and spending month after month of listening through every combination of the narrowly spaced component values, I finally arrived at SINGularity. This built-to-order product was first shown to the public in April 2019.

Entity uses the same input circuit, phono equalization, output stage and power regulation as SINGularity. What has changed is the case (instead of the extremely expensive copper case it’s now simple, functional and inexpensive), the power supplies (instead of two switch-mode power supplies with massive filtering it’s now equipped with the same copper screened linear power supply that I use in Slipsik 7) and the channel separation (instead of two completely isolated Mono channels, it’s now a dual mono design in a single case with a shared power supply).

I did try to cut things down further; I had the idea of making Entity out of a cheaper selection of components, in order to keep the price as low as possible. But this turned out to be a blind alley. I was never 100% engaged by the music that this version presented. When I finally gave in and built Entity with the exact same circuit as SINGularity, the result was a revelation. Like hitting the bullseye.

So I kept the two diamonds (my excessively selected and tuned MC phono circuits) and put them in a shoebox. Be prepared for a wild rollercoaster ride through your record collection. 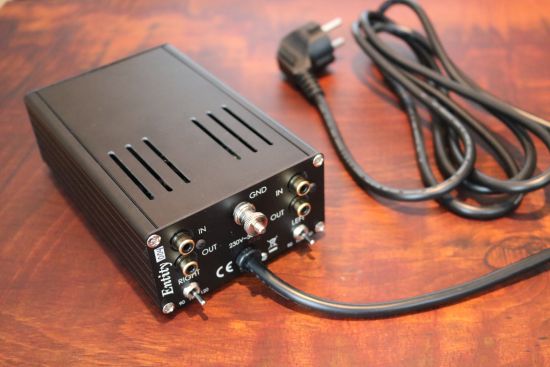 There’s very little to say about the Entity’s functionality and while I am fond of devices that offer many user-selectable functions, for many music lovers simpler will be better. Naturally, the Entity is not simple for simplicity’s sake. Rather, it is the result of leaving out anything that does not contribute to a better sound. The Entity has a captive power cable, offers a single set of inputs and outputs and has a switch to select the load at 90, 120 and 180 Ohms. There is nothing else to configure and as it uses less than 5 Watts, it can be left switched on indefinitely. The input sensitivity is specified at 0.4mV with 71dB gain and the output impedance is 300 Ohms.

Even though the power cable is captive, the manual specifies that it must be used in a certain orientation to achieve the weakest electrical field around the power supply which improves the sound. Naturally, I used it that way.

The Entity will be assessed using the resident Origin Live Calypso Mk4 turntable with a Vira Aidas Rainbow MC cartridge in its Illustrious arm. The LP-33’s output was initially sent to the Ayon Stealth tube preamp (which is how I normally play records) and later also to the Lejonklou Sagatun double mono preamp. Also used in the second instance is the Holbo Airbearing turntable with Acoustical Systems Aiwon and Palladian cartridges (review in the making). The Holbo’s platter and tonearm are both air-bearing designs. Another phono stage that is set up for review and is available for cross-comparisons is the Line Magnetic LM-33 and as an absolute reference, there is the resident CH Precision P1 reference phono stage. The power amp used is the CH Precision A1.5 and the speakers that I used are the Martin Logan ESL15A’s. The interlinks that I used with the Entity initially were the AudioQuest Water but and while that works very well, an even better result was obtained by using the Vermouth Reference interlinks. 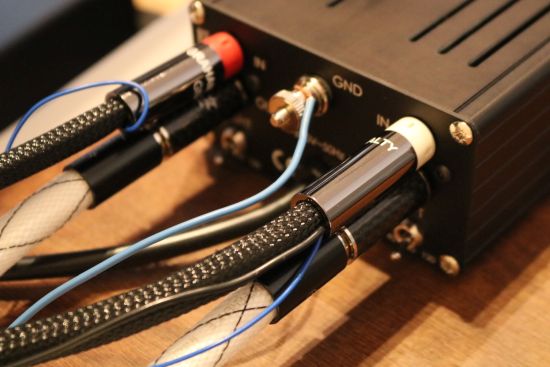 The normal load that I use with the Vira Aidas cartridge and the CH Precision P1 phono stage is 250-305 ohms depending on my mood and the music that is played. Although the values available on the Entity are a lot lower than I am used to, the cartridge did work very well even with these low settings. I settled on the middle setting of 120 Ohms. 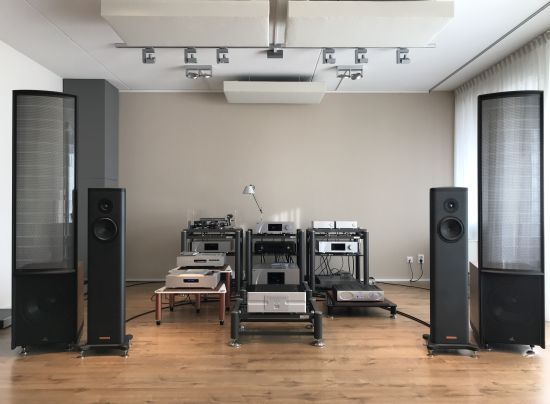 My first listening to the Entity revealed that it is very much cut from the same cloth as the other Lejonklou components that I reviewed. Even in comparison with my reference the CH Precision P1 phono preamp, the Entity sounds remarkably transparent, pretty much just as airy and refined and every bit as fluid. And irrespective of its huge transparency, the Entity absolutely does not add any hardness or edge nor the slightest amount of grain. This should not be underestimated as I have heard plenty of phono stages that do not achieve this level of nuance and freedom from hardness or edge even at a much higher cost. 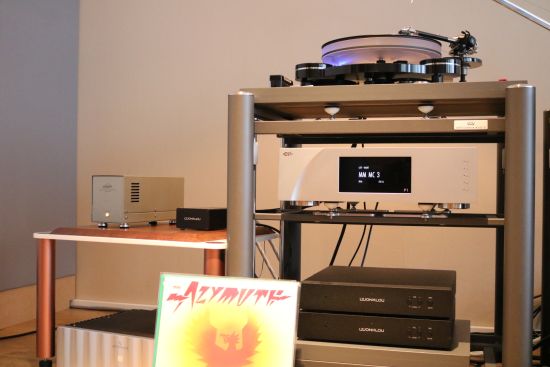 As I found, the Entity sounds much better on the Artesania Modular rack than it does on the floor. Although that sounds logical, many people might treat it as a power supply brick and think it would be fine on the floor. While it sounds very good even on the floor, it only comes to life on a good rack such as the Artesania. Other racks will no doubt also work well to a varying degree but this is what I have available. What the placement on the rack adds is a more solid bass, whereas it was full but lacking in punch and drive when on the floor, more acoustically credible timbre and an overall more energetic sound. 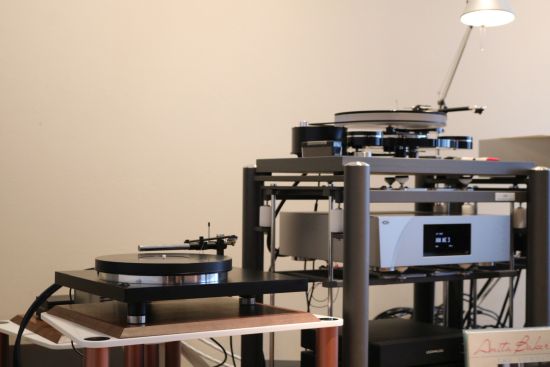 Fitted with the Acoustical Systems Aiwon, the Holbo turntable sounds even more articulate, linear and transparent but also less organic, free-flowing and 3D than the Origin Live. These differences were first observed using the CH P1 and, as was quickly evident, the Lejonklou laid them out just as clearly as did the P1. Its transparency truly is first-class.

In comparing the Lejonklou Entity with the Line Magnetic LP-33 that is also set up for review, the bass is tighter and especially the midrange is more linear and transparent as well as better-textured. Some subtleties that are glossed over with the LP-33 are now more clearly distinguished. While this can lead to a cool or overly clean sound with many transistor designs, the Lejonklou remains sweet, utterly fluid and seductive. The latter is an important factor for all Lejonklou designs, or, at least I think it is. It seems that the brand will not issue anything that sounds utterly detailed yet overly tight and controlled. From aural memory, the Entity’s resolution is pretty much on the same level as I remember the Jeff Rowland Cadence to be and as good as I’ve heard it from any recent phono preamp that I used except for the CH Precision P1. It may have been some time ago but I strongly feel that not even the Pass Labs XP17 presented this amount of transparency and fluid refinement.

The Lejonklou has a convincingly natural timbre with no synthetic nature but it’s not quite as texturally rich or as timbrally convincing as the Pass or indeed the CH P1. The LM-33, even if it is quite euphoric and not nearly as linear and transparent as the Entity, also has the capacity to slightly better flesh out wood and string instruments where the Lejonklou is just a little flatter and less “technicolor” than these other phono stages.

But all these comparisons are pretty relative because the Line Magnetic is a tube preamp, the Pass costs 5000 euros and the CH Precision is stratospherically-priced. Between the Line Magnetic and the Lejonklou, we have two entirely opposing presentations that makes this very much a matter of taste, not of quality. Tube aficionados that crave that lush euphoric delivery that only tubes provide and want the maximum amount of “soul” will no doubt opt for the LM and I fully understand that. The Lejonklou may not be tube-like rich but it certainly also is not cool. In fact, I don’t feel at all that the Lejonklou is in any way transistor-y or electronic-sounding.

Since I am used to listening to LPs played back via solid-state equipment (Jeff Rowland, Pass Labs and more recently CH Precision) the Lejonklou suits me perfectly. The Entity has clearly been tweaked so carefully that it simply has no sins of commission. While it is even-handed and superimposes no character of its own it is also highly rhythmic, expressive and articulate. Add to that its immense transparency and its free-flowing and highly refined delivery on a level that I have so far only heard from the Jeff Rowland Cadence and the CH Precision P1 and this starts to look like something of a bargain. The Entity may well be the phono stage to beat in its price range.