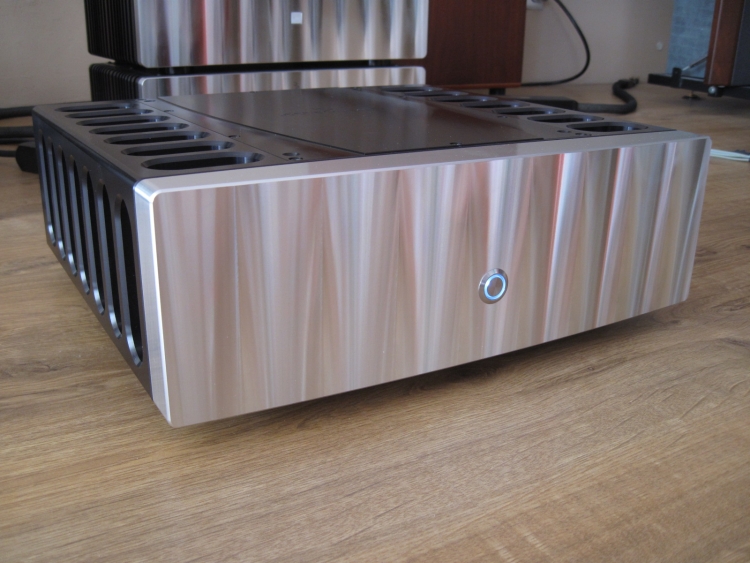 After the recent crop of ICE-power-equipped power amps, Jeff Rowland has now returned to the classic, proven class AB principle, but with a twist. 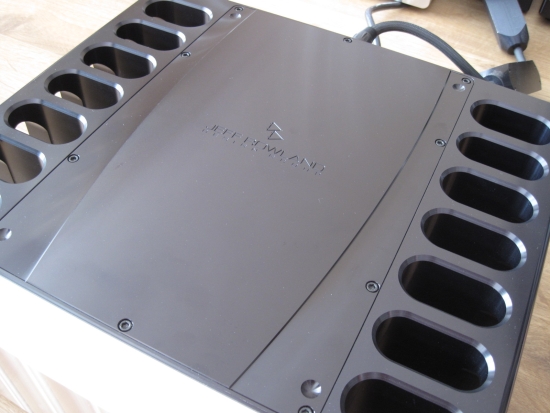 Above: Sophisticated and immaculately finished but brutally powerful. Company logo not on the front but engraved on the heavy top panel – quite stylish!

Regular readers know that I am very fond of Jeff Rowland. I guess it is fair to say that I am more than a little biased toward the brand. But I frequently give other amps a chance and if something better comes along, I will not be too proud to admit it. Interestingly though, I have never come across an amp that has entirely beaten my model sixes. Of course, there is the matter of personal taste, and Rowland amps do happen to cater to my taste, but Rowlands, also the sixes, can be beaten in certain areas. Luckily for me, this is always in the areas that are, for me, less important than others. There were too many amps to list but a few come to mind because they stick out above the rest that I tried.

There were the Bryston 7B ST’s, with much more power and drive and fantastic bass but only average resolution, focus, and refinement. Depth layering and treble extension were even below par. One could be forgiven to think that these PA amps would have coarse or harsh treble. This is absolutely not the case. Their treble is fluid and entirely free from edginess. It is just less well-resolved and doesn’t extend as far. But all that didn’t stop me from enjoying the 7B ST’s: they were immense fun. In the longer run though, the sixes catered more to my taste and made me consistently happy. In a perfect world, I would have several setups with several key areas of strengths but if forced to choose it would always be Rowlands.

A friend brought along a Levinson no.29. While certainly neutral and very powerful in the bass, it was also very dark in balance and lacked subtlety and sparkle.

I’ve also had a McIntosh (not MacIntosh!) MA-6900 integrated amp. That was when I thought my setup could be simplified without penalty. Of course, I was wrong about that but suffice to say that the MA-6900 does sound very compelling. It was like a mix between Bryston and Pass with a shot of Tube Sound mixed in: very powerful and dynamic yet highly emotionally engaging because of its mellifluous, even slightly rich midrange. However, it didn’t pass my standards for resolution and treble air. What’s more: the MA-6900 not only had less air and extension, it was really dull in the treble, and that weighs heavily for me.

The Dutch Array Quartz amps came close to sounding like a model 6 at a fraction of the cost. But the longer I listened, the more I realized that they lacked musicality, they were simply too stripped of color and body.

There were a couple of Krell amps that I compared my sixes to in other people’s setups. KS250’s and KS350’s. The funny thing is that these amps have a reputation for being powerful bass champs but in direct comparisons to the sixes, they only had mildly fatter upper bass and besides being able to play louder, at normal volume levels they really weren’t very much more powerful. The Krells did, however, have more slam but they consistently sounded quite ragged through the upper midrange and treble, and they were darkish and ill-resolved, also having little in the way of soundstage layering.

Then there was the Pass Labs X250.5. Also lots of fun and again better than the sixes in the bass and drive department, however less so than the Brystons. But another area of the Rowlands was now being challenged: that of midbass bloom and midrange believability. The latter is difficult to explain but Rowland amps, for all their naturalness, can be ever so slightly thin through the upper bass and lower midrange. Call them overly clean or call other amps overly colored. Doesn’t matter. The point is that if you need some extra color and substance through the midrange (as I do with my Magnepans) then you can do better than the sixes, as evidenced by the Pass. But the latter, again just like the Brystons, has less overall resolution and articulation across the frequency band, and, most important to me: treble was a bit coarse, even ever so slightly brittle and also didn’t extend as the Rowlands do.

Various Musical Fidelity amps came and went. All were very musical and appealing but most were too bloomy, just too rich through upper bass and lower midrange, and lacking PRAT. This was pre-2010 and I haven’t heard the latest crop of amps, however.

Of course, there were a couple of ICE-power amps: both Rowland-branded (model 201’s, model 102) and some OEM products, and even switching amps using proprietary techniques like the Audio Physic Stradas. While at least the ICE variants were remarkable for achieving such high quality at such models prices, invariably they failed to really stir me. ICE amps always sound fresh, agile and open, even the key area of treble air is almost up to model 6 standards. Technically it is all fine, if for a subdued, almost unconscious, lack of resolution. While some are better than others, it is always almost as if you can hear the holes between the power pulses, much like being able to hear (or see) MPEG compression.

I’ve also listened to a variety of tube amps, even highly exotic ones, all of them challenging the Rowlands in the midrange (convincing vocals) and sometimes the lower treble but never were they as finely resolved, as well-layered in the depth plane, as nimble in the bass or even as fluid and airy in the treble. The latter was interesting to find out because it is still said that transistor amps have a distinct transistor sound. It is also said that Rowlands mimic tube sound. Well, they don’t, but they do avoid all the usual transistor problems. Which is why I find them so compelling.

I think I’ve heard a fair share of amps and there might well still be a real challenger for my trusty sixes, but I haven’t heard it yet. That’s why they have been part of my system for so long. Another reason is their reliability: Rowlands are built for life it seems. They always work without a glitch, never hiss or hum and behave utterly predictably. Where tube amps need frequent tube swaps and need to be carefully placed to prevent hum or other noises, Rowland is care-free. Tube fans will point out that transistors also age and that you can’t simply swap them out like tubes. If that is the case, then I’ve certainly never noticed. I frequently put my amps up for comparisons to much younger specimens and I think I would’ve definitely noticed if they had started aging.

Which brings me to the last point in this introduction: operational life. I’d mentioned above that Rowlands are made for life and while that will certainly hold true for their pre-amps, I can imagine that their power amplifiers might not have eternal life simply because all capacitors (as word has it) will ultimately age. My sixes are anywhere between 14 – 20 years old now. It is because I like them so much that I am always aware of the fact that it is said that capacitors will only last around 20 years. Luckily I have engineers amongst my friends and they reassure me by saying that capacitor aging is very much coupled to warmth. And Rowlands have very good heat dissipation and also carefully place capacitors there where the least heat is developed inside the amp’s housing. Still, one can imagine that I’d be hesitant of having to recap the amps if the need arises.

I was very happy to see that Jeff Rowland haven’t stopped development with the range of ICE-power models and have recently added a whole range of newly designed Class AB models (625, 725, 825 and 925), because if I were to finally replace my trusty model sixes, a natural successor would have to have a badge saying “Jeff Rowland” again.

The subjects of this review, the new model 725’s, look to be the perfect candidates as replacements for the sixes, although their hefty price tag will be prohibitive for me, as well as the majority of audiophiles. But the good thing about reviewing equipment is that I don’t have to worry about that… until I want them of course! 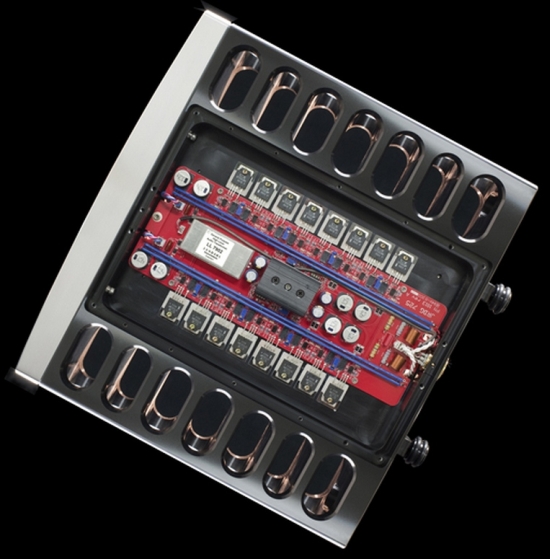 Above: Model 725 inside – top section, housing the actual amplifier 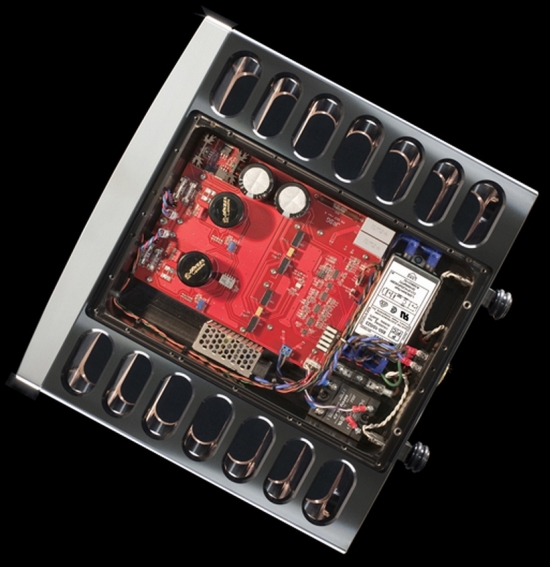 Above: Model 725 inside – bottom section, housing the power supply

Just look at these pictures… is that superb engineering or what! And apart from the switching power supply, this is genuine Jeff Rowland class A/B linear amplification technology. No ICE components in sight. The 725’s put out 330 watts into 8 ohms and almost double that to 650 watts into 4 ohms. Going by the looks and specs, the 725’s are very, very promising indeed. But how do they sound?