More than just another number!

Meridian DACs were usually assigned a number such as 606, 563 and 818. Now meet the Ultra DAC. Purely on appearance, it is hard to see the differences with the 818 but soundwise it is immediately clear that this DAC deserves more than just another number. Also see my review in the October 2016 edition of Dutch hifi magazine HVT

The Meridian 818 is categorized by Meridian as an Audio Core and that has to do with its multitude of connections through which it can fulfill the function of a central control unit. With the Ultra DAC Meridian are focusing purely on its qualities as a DA converter. Aside from the lack of analog inputs however the Ultra DAC offers much the same facilities as the 818. The sound and performance of an audio component are always more interesting to me than its technical specifications. All the specs can be found on meridian-audio.com and therefore I will only outline the main aspects here.

The Ultra DAC offers a nicely complete collection of digital inputs: 1x USB 2.0, 2 x AES / EBU, 2x BNC, 2x Coax, 2x Toslink and 1x Ethernet Sooloos Speaker Link. The DAC decodes PCM signals to 24 bit 384kHz and can handle a multitude of different formats such as DXD, DSD64 and DSD128 (DoP) and of course MQA. The conversion is of the now-familiar Apodising type but with a few important twists. DSD is decoded by means of a multi-bit modulator that according to the manufacturer enables shorter impulse times than with conventional DSD decoding. Hierarchical Converter Technology applies multiple converters to allow for the increase of information in the time domain and is said to reduce distortion. The output stage, previously implemented on a single circuit board, is now divided into a separate mono board per channel and the Ultra DAC also has a separate clock card which in combination with FIFO buffering should ensure the lowest possible jitter. The analog signal is available in both RCA and XLR and you can tune the sound to your personal preference by means of three different upsampling DSP filters (long, medium and short). Finally, the Ultra DAC is the preferred candidate to highlight the benefits of MQA.

Classic digital Meridian products were known to sound smooth and friendly and without any harshness, and this brought many people to proclaiming them as being “analog” sounding DACs. At that time there were indeed DACs that sounded technical or even harsh, so this sentiment is understandable, but real analog sound is more like a chameleon: it can be silky smooth or explosively dynamic, according to what is in the recording.

The 818v1 DAC was the first Meridian DAC that I heard which departed from its predecessors’ well-behaved image. The 818 has no inherent hardness or graininess whatsoever, but can really sound impressively dynamic whilst always remaining incredibly subtle and refined. In its rare combination of subtle finesse and impressive dynamics, while avoiding sounding clinical or overly controlled, the 818 is one of the best DACs that I had heard so far. The Ultra DAC however, manages to surpass the 818’s performance considerably. 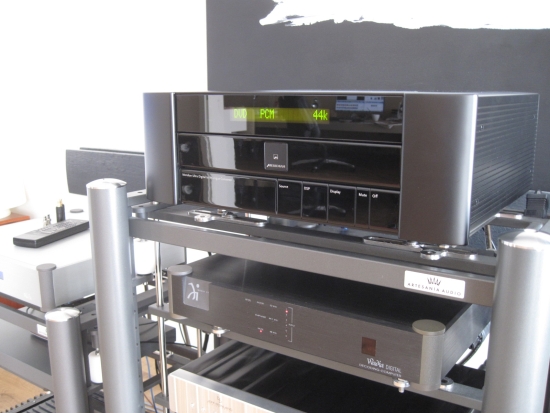 The Ultra DAC was said to be run in when delivered but I gave it a few extra days under power before serious listening commenced. I remark that I heard no significant differences between the first notes it played right from the cold and how it sounded after playing for a week.  As power cable, I used the Reference Tweaks Gold Label (T T L treated Furutech Alpha 3) with IeGO gold connectors. The interconnects were Cardas Hexlink Golden 5C (also treated T T L) in XLR version. I tried both USB and coaxial and while there are subtle differences (coax sounds slightly fuller and USB sounds slightly cleaner), both connections sound great, and I noticed no differences in terms of pacing or soundstaging.

Playing music in CD quality from the Aurender N10 music server using an AudioQuest Diamond USB cable, the Ultra DAC has a catchingly engaging sound: dynamic, direct and lively as well as utterly refined and non-aggressive, aspects that can be difficult to achieve by any single audio component. Often a superb liveliness is accompanied by a certain abundance of attack, or a distinct lack of charm, but this is definitely not the case with the Ultra DAC. It is perhaps best to explain this phenomenon on the basis of a comparison with analog LP replay. This medium is able to combine a very fast impulse behavior with an in digital often unattainable degree of continuity and long decay times. The Ultra DAC may not sound like a turntable per se, but in these aspects, it does remind of some of analog replay’s greatest aspects. 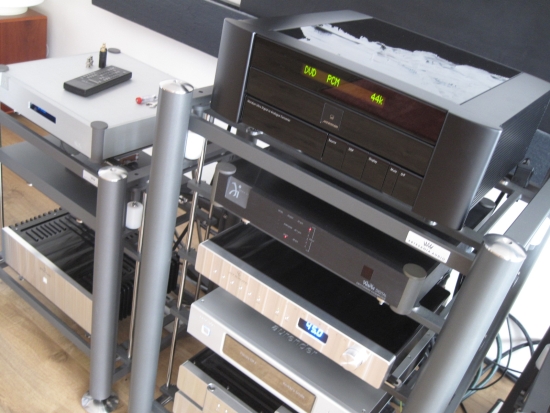 To put the Ultra DACs sound further into perspective, let me bring in the Wadia 521 DAC for comparison. This brand has always been number one for me in terms of solidity in the bass and very few DACs have a similarly powerful bass in my opinion. Switching back to the 521 after having listened to the Ultra DAC however I can only conclude that the Ultra DAC surpasses the Wadia in this very aspect! But it is not only in the bass that the Meridian is remarkable: also in terms of dynamic behavior the otherwise lively Wadia seems to sound less outgoing, the Ultra DAC simply sounding even more “immediate”. Although the 521 has very good high-frequency extension for a Wadia (all Wadias are toned down in the treble due to the filter method used), the Ultra DAC also impresses in this area with a free-flowing, open and airy, high-resolution treble.

Is the Wadia completely surpassed then, one might wonder. Well, not quite. Timbrally the Wadia is fuller, more sonorous. In spite of the Ultra DAC’s more powerful bass, its sound is more modern and cleaner, especially in the lower midrange. In combination with my Apogee Diva magnetostatics at least, the Wadia’s typical sonorous timbre combines to provide an acoustically more realistic sound. This aspect of the Ultra DAC’s sound is something that no doubt can be further tuned with the correct power cables and interconnects, but I saw no need for this for this review because the Ultra DAC “au naturel”, ie without being tweaked, is so entertaining and impressive that I felt no need for further tweaks.

Alas, I had only a limited amount MQA files available: the same selection that I used for the 818v3 review. In that review, I was somewhat on the fence with respect to the benefits of MQA but with the Ultra DAC, all the MQA files sounded consistently crisp and dynamic, in some cases with seemingly better impulse behavior than either the CD version or the Hi-Res PCM version of that same track. 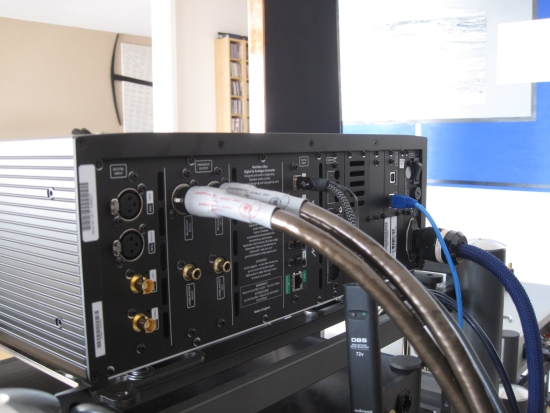 Naturally, the Ultra DAC is suitable for use with both Sooloos hardware and Roon software and with both sources it performs excellently. Very nice is that the Roon or Sooloos playlist can be controlled with the MSR remote control unit. However, no matter how well it worked with these streaming formats, I was most impressed with the Ultra DAC when the Aurender N10 was used as a source. This made for the best match in terms of finesse and naturalness in timbre. Conversely, whether this was because the USB and SP/DIF inputs have some sort of advance in the way that they are treated internally, or the streaming protocol just loses out a bit, in general, I don’t know, but both Roon and Sooloos sound slightly soft on the transients in comparison. To my ears, Roon and Sooloos are the best streaming mechanisms available, but a direct connection remains the best.

A special mention is in order for the DSD playback, which is positively distinguished by the lack of the, in my experience for DSD so typical, softness and lack of authority and control in the bass. The Ultra DAC seems to playback DSD files  as if they were PCM recordings, but with super high resolution. 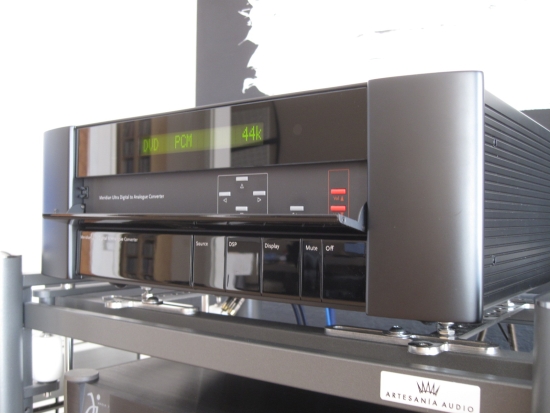 Current owners of upscale Meridian equipment have viewed the 800 series as the pinnacle of music systems for more than a decade, but in the rest of the audiophile community, the series seems to remain largely ignored. In my view this is completely unjustified: the Ultra DAC may cost a lot of money, but there is also a lot in return. The more affordable, functionally similar 818v3 is already a world-class DAC, but the Ultra DAC manages to further improve its performance in musically relevant areas. Its coherent, powerful, and incredibly lively character, coupled with great subtlety and utter lack of grain makes for an infectiously addictive sound that always impresses and never tires.

Sooloos is now Roon – try it for yourself, on any hardware of your choosing 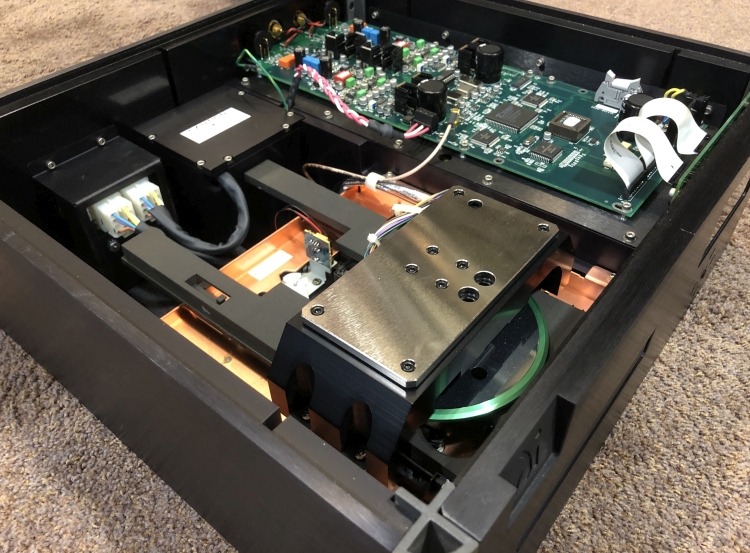