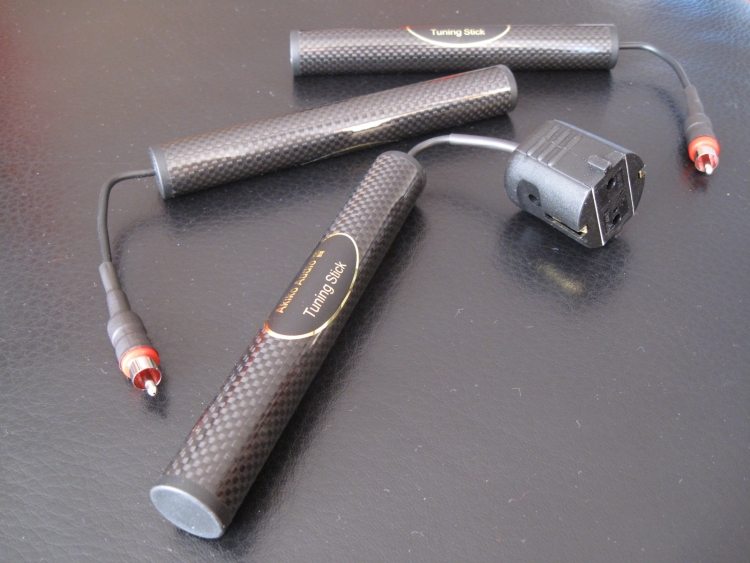 A novel idea, carried out beautifully

After introducing products like the GEM 1 that “wrap” around a cable, Akiko Audio have now developed a means of tuning virtually any kind of electronic component. 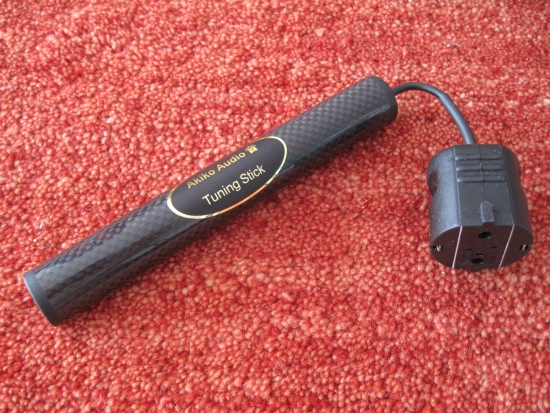 The Tuning Sticks plug into a vacant RCA in- or output or power outlet and clean the earth by means of applying known techniques and new insights in the areas of crystal patterns using paramagnetic and piezoelectric properties of natural raw materials. The Tuning Stick’s contents are then stabilised with black resin, a material which sufficiently supresses microphony effects.

I realise that these sorts of tweaks may come across as unbelievable to some folks but if I’ve learned one thing after all these years of using audio tweaks, it’s that you should approach them with an open mind because almost as it turns out, any tweak, even very unusual ones, will alter the sound of my system, no matter how subtle. In the case of these Tuning Sticks, I naturally also expected to hear something but definitely not as much as there would turn out to be.

Immediately after plugging the AC stick into a vacant outlet of the main power distribution block (for all sources), the sound is very noticeably different: airier, with a seemingly wider soundstage. The midrange is less forward and attack is lessened. What’s more: the sound signature of my system is different overall and feels mellowed down. Because lots of setups have probems with hard/forward/agressive midrange, making snares and such have less impact and this is likely to be a welcome change but what is less welcome for me, in my setup at least, is that pace also appears to be lower. There is less propulsion, making for a less rhythmic sound.

The Tuning Stick is an easy tweak to apply and remove: as soon as it is removed, the sound is back to normal so I did a few extra tests with and without and came to the same conclusion: if I had less smooth and fluid sounding equipment than Jeff Rowland, then the Tuning Stick AC might well be an excellent addition, but in my setup it is too much of a good thing. 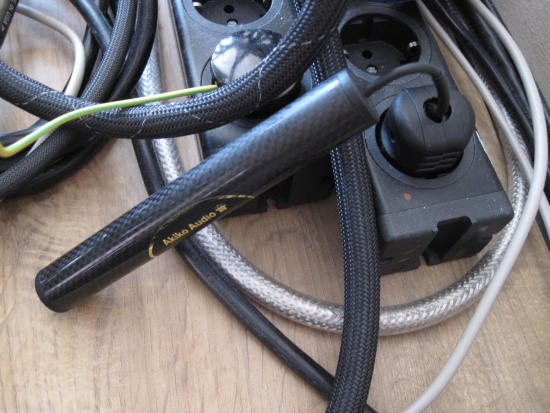 The main distribution block is wired with shielded Lapp cable to the main wall outlet. The block is made of aluminium and also shielded itself. But given the results with the main block, I also tried the Tuning Stick AC on the second distribution block that powers the pre- and power amplifiers.

Used in a vacant outlet on the second distribution block that is wired with unshielded installation wire, amazingly the effect is still present, but less so. Still present is the more filtered/luxurious presentation and slightly less agressive midrange but this time the rhythm doesn’t diminish. Would this better match be a function of the absense of shielding? The block’s case is still earthed, just the cable powering it, has no shield itself. Or would it be a function of balance, that this more lively sounding block simply matches better with the smoother sound injected by the Tuning Stick? Who knows. All I can say is that as always, synergy is everything. 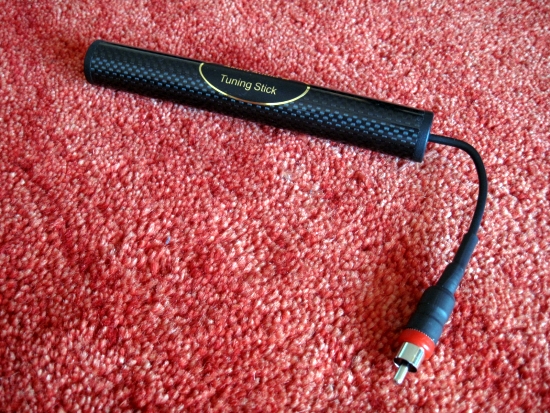 The RCA Tuning Sticks are similar to the AC sticks but with an altered material mix inside. They can be used on any unused in- or output on any component in your system.

First position where I decided to use the Tuning Stick RCA was on the cinch outlets of the Rowland Aeris DAC while its XLR outputs were used to connect to the preamp as normal. The Aeris has transformer-coupled inputs and outputs and balanced circuitry throughout and therefore the earth shouldn’t have anything to do with the music signal. Nevertheless, either through the Aeris, or through “treating” the connected equipment, the effect heard earlier with the AC stick is evident here as well: a more luxurious sound with a smoothly filtered character. The magnitude of the effect is slightly smaller than with the second power distributionblock but still easily recognisable: it is a bit like the Magnepan speakers are back. This requires a little explanation I guess… for almost 8 years I have used Magnepan MG3.6R full range magnetostats as reference speakers. Since three weeks I have been listening to a pair of fully restored Apogee Duetta Signature full range ribbon speakers. Their sound is fantastic: much purer and more authentic than the Maggies, making the latter sound somewhat filtered. The same effect is heard in my setup with the Apogees when applying the Tuning sticks. This effect is not an unpleasant one, on the contrary. Just like the Maggies are more forgiving of dry or sterile sounding recordings than the Apogees are in the setup, the system with Apogees is also more forgiving with Tuning Sticks in place. 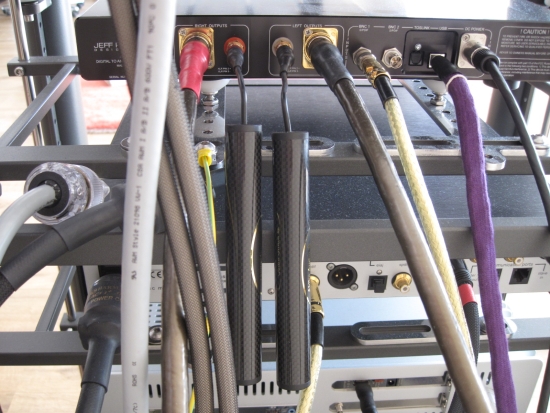 Second position tried is on unused inputs on the preamp. Like the Aeris, the Coherence II uses transformer-coupled in- and outputs but I think that all the inputs’ earth connections are all connected together on the input board. As the Coherence II only has XLR inputs, I used a Cardas RCA-XLR adapter that connects earth to pin 1, as it should. Here the effect was quite large again – I’d say as large as the AC versions, having just as profound a damping effect, minus the lessening of rhythm.

Just for fun, I dug up an overproduced R&B CD and indeed as expected it’s CD’s like those (clipped and harsh) that benefit a great deal from having a less agressive, smoother feel. But overall, with well-produced CD’s I found the effect of the Sticks to be too large for my setup.

I’ve also listened to the Tuning Sticks in a friend’s system, belonging to JW, my closest listening buddy. His system is similar to mine (same brand of amplification and cabling and similar speaker types) but I know from experience that it responds quite differently to tweaks than my system. After plugging in all the Sticks in for maximum effect (RCA types in unused preamp inputs, AC type in the only unused socket of the main distribution block behind the system) the effect is immediately noticeable. I knew what to expect but JW didn’t. Still, he reached the same conclusions as I did, claiming the Sticks make his sound more “analog”. And indeed this is the case, making treble more liquid and smooth, midrange fuller and richer and the same really for the bass. But like me, JW wasn’t entirely happy as quickly he realised that along with all the smoothness, came a sense of restraint. Dynamics and snap are indeed lessened a bit too much. But of course this was with all products in place at the same time. So, we experimented on and found that having only the AC version in the system provides just the right balance between adding a nice “analog” feel and smoothing out some roughness while not taking away any bass articulation, dynamic expression or transient snap. JW likes the AC Tuning Stick so much that he wouldn’t give it back! 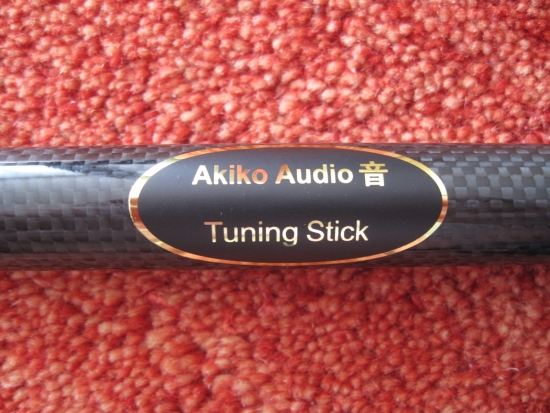 The effect that the Sticks have on the sound is very large and of the pleasant kind: a more luxurious, smoother, less stressful- yet also less powerful feel. While the setup sounds more glorious with the Sticks in place, overall I liked my system better without them. I must mention that temperature outside has been quite high for an extended period and that this may have had a profound effect on my sound, making it smoother than normally. What might also be the case is that my equipment is already very smooth by nature and that the match might simply not be an optimal one, which would seem logical since the GEM1’s were also found to be too much for my main system. The GEMs by the way are still living happily in my cinema system.

To further put the Tuning Sticks to the test I have also tried them in a friend’s system. The situation there is similar to mine, but also different: while the addition of all Sticks at once also proved too much for his system, the addition of the AC version alone was just what the doctor ordered and this tweak won’t be leaving his system again.

It cannot be stressed enough that in audio everything revolves around system synergy. My system has been carefully tuned already and this is why new tweaks don’t always work well for me. Still, you never know when something comes along that matches the virtues and vices of my system perfectly – it has happened quite a few time already! The point I’m trying to make is that it is all about balance and that simply adding one tweak to another can quickly result in an unbalance. But used with thought, tweaks are capable of making or breaking a system. My system happens to be smooth already and adding Tuning Sticks simply tilts this balance over too much. But my friend’s system is a little bit leaner/more open and as such it proved to benefit from the addition of the AC Tuning Stick. I can only imagine how much good the Sticks can do in an overly digital/clinical sounding setup. They might just happen to bring the perfect dose of magic. 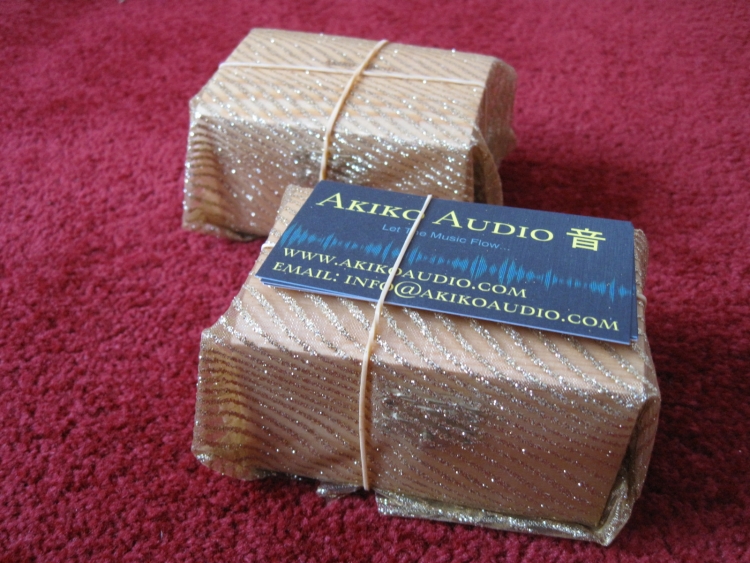 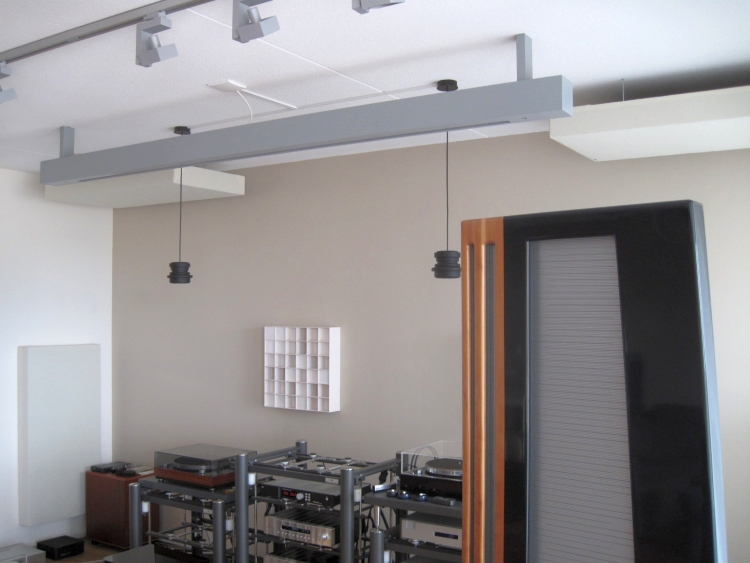